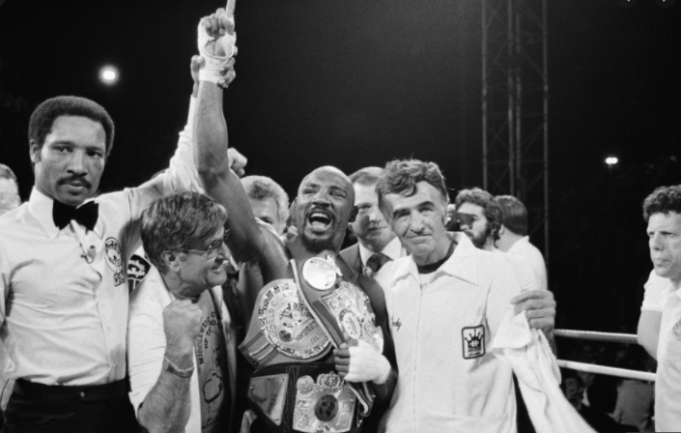 His personal motto was “Destruct and Destroy.” It certainly seemed to legions of admirers as if Marvelous Marvin Hagler himself was indestructible. Last Saturday we learned differently. Although we fight fans thought of Marvin as somehow immortal, he was, sadly, no less immune to the inevitability of death than the rest of us puny humans who worshipped him.

To realize that, physically at least, the Marvelous One has vanished forever into the mists of time, not unlike the fog-shrouded Provincetown beaches Hagler would run up and down when training for fights, is almost too painful to comprehend.

To consider, however, that Marvin has perhaps reunited with Pat and Goody Petronelli somewhere in that great boxing ring in the sky makes this realization a little more tolerable. It might even give you occasion you smile to visualize the three of them together again.

“It’s taken all of us to get there,” Hagler once said in acknowledgment of the integral role the Petronelli brothers played in his success. “The triangle. We stick together.”

Occasionally throughout the years, overtures were made to Marvin in ill-guided attempts to muscle Pat and Goody out of the equation, but Hagler wouldn’t hear of it. In a profession where the truth is too often mangled into unrecognizable forms and relationships can be as fleeting and empty as the promises that tear them apart, Marvin was a principled man of his word who never wavered from what he knew to be right and wrong. For him, there was no grey area in between.

Even Bob Arum had to admit that theirs was the “strongest and closest” connection between a boxer and his advisors that he had ever seen. Coming from a guy who has been around the block a time or two thousand, that’s saying quite a lot.

“Nothing is stronger than a triangle,” maintained Goody Petronelli. Three men. One mission. Marvin was a man of few words, a mercenary who preferred to let his fists do the talking. When it was necessary for him to discuss his approach to boxing, Hagler could be every bit the artist he was inside the ring, evoking warlike imagery to paint frighteningly vivid verbal tableaus wherein he was the hand-to-hand combatant implementing strategies drawn up with deliberate precision by Goody, who took a very hands-on approach to the everyday mechanics, while Pat concerned himself with the logistical and financial details from a business man’s perspective. Each individual was well aware what was required of him to keep the war machine well-oiled and rumbling across the landscape of boxing’s battlefields, and never once did any of them overstep their respective boundaries.

Hagler’s mother Ida Mae took the family out of Newark, New Jersey when a second outburst of race riots occurred in 1969 and headed northeast, settling in near relatives who lived in Brockton, Massachusetts. That same year, almost as if fate ordained it, the Petronellis went into the boxing business together after Goody got home from the Navy, expanding the small Brockton gym Pat had opened four years earlier into a bigger establishment on the second floor of a brick building on Centre Street that housed a hardware store on street level. Had he not been killed in a plane crash that very August, a close friend of the Petronellis, who also happened to have been the undefeated heavyweight champion of the world when he hung up the gloves in 1955, would have partnered up with them.

“In Newark I’d never heard of Rocky Marciano, but as soon as I hit Brockton I found out,” admitted Hagler, who had trained not terribly seriously with a social worker known as Mister Joe as a 10-year-old back in New Jersey, mostly having fun shadowboxing and pretending to be Emile Griffith or Floyd Patterson. “From what everybody told me, he always kept himself in very good condition. He was from the old school.” Marvin might not have finished high school, but he most definitely graduated from the same metaphorical “old school” as Marciano.

“He doesn’t have Rocky’s style. Rocky’s defense was his offense,” Goody later said in comparison to the two Brockton legends. “But Marvin’s got the same heart Rocky had, the same ability to take a punch, the same determination.”

Hagler was a fifteen-year-old with holes in his sneakers and a single dollar in the pocket of his cutoff jeans when he started turning up at different neighborhood gyms where he would just sit and soak up the atmosphere, watching intently as the fighters were put through their paces. After a handful of visits to the Petronelli’s place, Goody approached and asked the quiet black kid observing everything from a far corner if he would like to learn how to box.

Marvin replied in the affirmative, telling the old well-meaning white guy that was why he was there. He was going to become a world champion. No doubt having heard that same sentiment uttered by each one of the hopeful youngsters who walked through the door of his gym, Goody humored him by smiling and saying, “Sure you will, kid. And I’ll be your trainer when you do.” Little did they know then.

Trust, as it should be, was always a hard-won commodity in Marvin Hagler’s evaluation. So, it stands to reason that this was naturally the case with him and the Petronellis brothers. In Newark, pretty much the only experience he had dealing with white folks was limited to school teachers, letter carriers, store clerks, and police officers. In other words, authority figures who Marvin, by experience, had reason to be wary of. “If they were nice, I thought, ‘What do they want from me?’ I had to learn for myself how people really were,” he reflected. “When I found out all white people weren’t bad, I started to relax around them. It took me a long time. Goody and Pat had a lot to do with that.”

The Petronellis were sympathetic to Marvin’s sensitive and standoffish demeanor, taking the time and patience they understood were required to nurture the relationship. The trust that was built between the three as a result of these efforts paid dividends for all involved. “In the beginning, they never took a dime of my purses,” Hagler said in retrospect. “They told me, ‘One day we’ll all make money.’ And now we are. And it’s good to see them get the respect they deserve.”

“We came up the hard way. Anything we got we worked for. That’s why there’s a bond between us and the champ,” recounted Pat, who Marvin would ask to be the godfather to his daughter Charelle Monique. Goody, one of the very select few running partners Hagler would allow to accompany him on his roadwork, concurred. He elaborated on his brother’s statement by adding, “We were never given anything on a silver platter. It was the same with Marvin. Nobody gave him a single break.”

A master chief petty officer in the Navy, Goody had served as a boxing coach who trained a squad of military pugilists stationed at the Naval airbase at Grosse Isle, Michigan that took on a visiting group of Golden Gloves champions from Detroit. Prior to that, Goody had fought at welterweight in the novice ranks under his birth name of Guerino Petronelli and racked up a record of 23-2-1 by his count. Any hopes of his career progressing past that point were derailed by injuries that continued to nag him after breaking his hand.

Pat, whose real name was Pasquale, carried on a briefer flirtation with amateur boxing. Quickly finding that the rigorous training required to make a serious commitment was not to his liking, he didn’t stick with it. Having grown up on welfare during particularly lean times, the pair of Petronelli siblings came from a shared background in construction and followed in their father’s footsteps by starting their own firm which they used to help underwrite the costs of running the boxing facility.

When he wasn’t skipping rope, sparring, or banging away at the heavy bag in the Petronelli’s gym, Marvin Hagler earned $3 an hour digging ditches, pouring concrete, or framing buildings on one of their construction sites. No matter the task at hand, his work ethic was nothing less than completely disciplined. Marvin never had to be asked twice, and often didn’t have to be told at all. This changed not one bit over time.

Hagler was a natural righthander, but for some reason felt more comfortable fighting from the southpaw stance. Goody went with it initially, grooming him as a lefty for his amateur outings up to and including his run through the 1973 AAU National tournament where he won the award for the outstanding boxer in a distinguished field that included, among others, Aaron Pryor, the Spinks brothers, and future nemesis Ray Leonard. Along the way, Goody encouraged Marvin to box orthodox as well so that he would have more than one weapon in his arsenal.

It was with this ambidextrous attack that he knocked out Terry Ryan in the second round of his professional debut at Brockton High School, and the switch-hitting Marvelous Marvin Hagler we would come to know and love was born. Like he said to Johnny Carson while raising both balled-up fists during his 1987 appearance on The Tonight Show prior to the Leonard fight, “If this one doesn’t get you, the other one will.”

Operating under the often correct assumption that managers were hesitant to match their fighters opposite a southpaw, promoter Sam Silverman had urged the Petronellis to work with and bill Hagler as a righthander to be able to secure him more frequent bouts. Three fights and two knockouts into Marvin’s pro career, Silverman changed his tune, telling Goody to let Hagler revert to being a lefty. “He’s more devastating that way.”

It’s been said that no signed contract existed between Marvelous Marvin Hagler and the Petronelli brothers. Repeated so often that, fact or fiction, it has become part of boxing folklore. Whether or not it is an urban legend that the entire tenure of their fourteen-year professional partnership existed on no more than a handshake agreement and mutual understanding seems immaterial. The fact that it sounds good and just feels right is proof enough for most to accept.

They remained connected even after Hagler’s controversial 1987 loss to Sugar Ray Leonard and subsequent exile to Italy, and the Petronellis turned their collective attention toward guiding the careers of Marvin’s half-brother Robbie Sims, Steve Collins, Kevin McBride, Peter McNeeley, and Drake Thadzi to name a few.

The first side of the triangle fell away in September 2011 with the passing of Pat Petronelli. Unable to withstand the grief of having lost his brother and beloved wife Marian within weeks of each other, Goody followed four months later and the top part of the triangle collapsed upon Marvelous Marvin Hagler who shouldered the burden on his own until he too left us this past Saturday.

“My character, after getting ventilated by bullets, was supposed to die,” recalled Hagler of his experience filming a political thriller called Notti di Paura (Night of Fear) on location in Russia. “The director says, ‘Die.’ Believe it or not, it was the hardest scene for me. I mean, how exactly do you die? Hey, I’ve never died. I’ve only lived.”

Juan Dimagiba. The Team of Marvin Hagler and The Petronelli Brothers Was Destiny (medium.com, March 15, 2019)

Rope A Dope: Preview Joshua vs Usyk! Is Plant Under Canelo’s Skin?