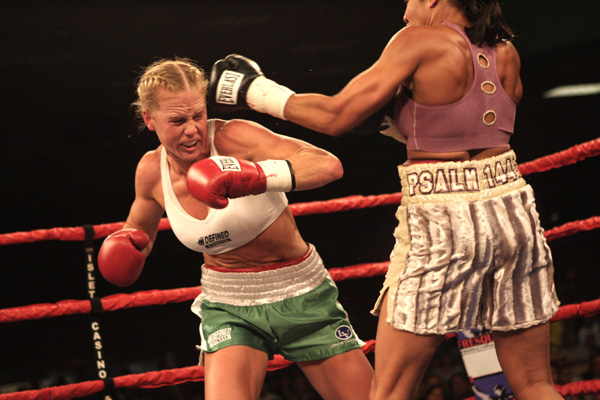 “Did I bring too much emotion to the fight? Did I try too hard to knock her out? I even questioned if I’d pulled on the right socks,” mused Mary Jo Sanders when she allowed herself the time to properly reflect on her defeat at the hands of Holly Holm. “You think about every little thing. But you can’t let it drive you crazy.”

What undoubtedly did drive Sanders crazy was Holm’s herky-jerky maneuvers and catch-as-catch-can methodology. Just when you think you’ve done your due diligence and are ready for any variable that can be thrown your way, it is astonishing how quickly you can become unhinged by flesh and blood problems presented to you in the heat of battle that require immediate response and reaction and prove to be far more difficult to solve than you could have possibly anticipated. Holly Holm was the conundrum for which Mary Jo was seemingly at a loss to find a solution.

Looking to initiate a pre-emptive strike, Sanders vaulted out of her corner at the opening bell. Her plan was to cut off the ring and nullify Holly’s there-one-second-gone-the-next exit strategy. Easier said than done. Using lateral movement and awkward hop-steps, Holm had an uncanny ability to manifest an escape hatch where none was present the moment before and skip quickly away from incoming bombardments. After creating a safe distance, she might choose to spontaneously launch herself forward with her head down and fists flailing just as she first did to Sanders roughly thirty seconds into the fight and would continue to do repeatedly.

Though the element of surprise was on her side in such instances, ambushes of this sort were largely ineffectual from an offensive standpoint due to the fact that the punches were being thrown while she was in motion and not from a set and planted position to generate maximum power. Some did land, however, and this would please judges who score on volume rather than accuracy or potency. To prevent against counterattacks, Holm would retreat just as hastily as she had surged ahead and, like the ocean tide, come rushing right back in again.

This made it incredibly difficult for Mary Jo to keep Holm confined and within easy striking distance like she had hoped. Instead, she spent the majority of the time pursuing the gazelle-like champion from pillar to post around the twenty-foot ring in an effort to trap her long enough so that she could get off more than one single power shot at a time. Again, easier said than done. But not for lack of trying.

Sanders attempted to work her way inside behind her left jab, but would more often than not find herself in a clinch as soon as she was able to close the gap. Referee Kenny Bayless, as he is wont to do, continually insinuated himself into the action and made an aggravating habit of breaking Holm and Mary Jo apart with little provocation. Disinclined to permit fighting to occur at close quarters, Bayless presented the methodical and heavy-handed Sanders with yet another quandary while Holly, whose punch selection was predictably unpredictable, was given the advantage of conducting business at a frantic pace which was far more to her liking.

All of this is not meant to suggest that Holm was all flight and no fight. On the occasions that Sanders did manage to corner her, Holly would respond accordingly, punching her way out of these temporary predicaments and leaving Mary Jo with frustratingly little to show for the effort. Not until the waning moments of the fourth round was Mary Jo able to land anything of consequence, a straight right followed up by a left hook seconds later which forced Holm to backpedal away from further trouble. Sanders touched her with two glancing rights in the process before being tied up as time expired in the frame.

Mary Jo’s trainer Jimmy Mallo liked what he saw toward the end of the round and urged her to do more of the same as he applied Vaseline beneath her eyes during the rest period. Meanwhile, a bundle of inexhaustible nervous energy, Holm bounced up and down in her corner as if on a pogo stick like she did while awaiting the bell to signal the beginning of each and every round. It was Holly who came out swinging but Sanders who connected with the round’s first meaningful shot, backing Holm up with a right hook at the minute and a half mark.

Whether it was thrown straight down the pike or came in the form of a hook or uppercut, Mary Jo’s persistence in throwing the right hand was beginning to pay off more consistently. This may not have opened the door to prolonged momentum shifts, but things were looking much more promising for Sanders than they had to that point. Holm used her long jab to not only ward off her attacker but to tally points, occasionally popping Mary Jo with her mitt as she was encroaching upon Holly’s territory.

Holm’s game of cat and mouse carried on as the bout progressed. So too did Kenny Bayless’ penchant for separating the fighters at his fastidious discretion. These two variables certainly made initiating, much less sustaining, some sort of impactful offensive an irksome task for Sanders. Curiously, even in the clinches Mary Jo seemed to be willfully ignoring Holm’s midsection, targeting her head almost exclusively whereas Holly would take advantage of the chance to invest in body work when presented with it. This was a missed opportunity to take at least some of the wind out of Holm’s sails and potentially keep her more stationary in the later going.

Sanders had her best round thus far in the eighth, establishing herself as the clear aggressor by mauling Holly and shooting short uppercuts between her guard in the brief instances that the two were allowed to stand shoulder to shoulder. While Holm made the most of the ring’s entire circumference, it was no longer her exclusive domain. Mary Jo was noticeably gaining a little more ground with each elapsed stanza when it counted the most, down the home stretch. Or was it too little, too late?

A slugfest broke out in the first twenty seconds of round nine until Holm catapulted forward to grasp Sanders in a clinch, her unwieldy momentum taking both combatants down to the canvas in a grappling maneuver which foreshadowed Holly’s future exploits in mixed martial arts. Mary Jo bore the brunt of the fall on her left shoulder despite tossing Holm aside in mid descent to ensure that Holly didn’t land right on top of her. Thankfully this did not result in an injury to either fighter, and the action picked up where it left off before the interruption with Sanders muscling her way to a slight advantage in a match which would ultimately favor the boxer with the more acute timing and precision.

Mary Jo threw and landed a beautiful straight right fresh off a clean break instigated by Bayless, necessitating another clutch-and-hold tactic from Holm just before the bell ending the penultimate round. Sensing either that she had Holm hurt or that the fight was too close to call and she needed to put the pedal to the metal, Sanders roared straight toward center ring where she let loose with a flurry. She undoubtedly took some to get some, namely a looping left hook from Holm in the last minute of the fight, but Mary Jo appeared to be finishing very strong.

With fourteen seconds left on the clock, Holly propelled herself upwards off the mat while spastically kicking her left leg out behind her in a truly bizarre display of graceless gymnastics. The look on Sanders’ face is priceless. Mary Jo tried to capitalize on this head-scratching moment by lobbing an improvisational left hook just as an off-balance Holm touched back down, but it came up short of the mark.

Holly wasn’t done with the weird theatricality just yet. She lunged forward moments later with a wild left hook, again crazily lifting her left leg in the direction of her backside at a 45-degree angle. A possible callback to her beginnings as a kickboxer as well as once more providing a glimpse into her UFC career still three years in the making, this maneuver is known in different disciplines as the “Superman Punch.” It just missed grazing Sanders’ chin and, with that final idiosyncratic flourish, the time keeper’s bell tolled for the last time that evening.

Jimmy Mallo picked Mary Jo up and did a victory lap around the ring with her in his arms while Holly celebrated with Mike Winkeljohn, but the winner of the fight would be determined by the judges’ scorecards, not self-confidence or wishful thinking or best intentions. The verdict could conceivably have gone either way in a fight this difficult to appraise, so it’s hard to argue with the nod being given to Holly Holm and, let’s face facts, Mary Jo Sanders was never going to get a decision in Albuquerque.

That said, the 98-92 tallies arrived at by both Joe Garcia and Jon Schorle were ludicrous. Mauro Di Fiore only granted Sanders one additional round, scoring the bout 97-93. Nevertheless, Sanders gave Holm a congratulatory hug after the decision was rendered and her father Charlie stood and applauded in appreciation of the effort put forth by his little girl as well as the hometown champion who just beat her.

Having handed Sanders her first career loss, retained her title, and won the WBAN belt presented by Sue Fox, Holly did her trademark backflip at center ring before taking the microphone to tearfully acknowledge everyone who made the victory possible. “I’ve never dealt with anyone so professional,” she remarked about Mary Jo. “She’s a great person, a great fighter, a great champion, and I just want to give her all the thanks.”

As for her postmortem on Sanders’ performance, Holm said, “She’s not one of those fighters who throws real tight. She’d throw looping punches, so I just tried to counter her down the middle. I didn’t want her to get off and set her feet and throw all those combinations. And I noticed she wasn’t as good fighting on her heels.”

Holly would additionally reflect, “I’m going to learn a lot from this fight, because I still think I can do a lot better.”

Requiem for a Welterweight: Who Killed Jeanette Zacarias Zapata?

Boxing hits a new low as Belfort Knocks out Holyfield