In the 1940s Manny Seamon could be heard all through Harlem and Jacobs Beach asking, “How would you like to make $25 a day?” In the early 1940s some people weren’t making that much in a week. Which was why Seamon asked such a question to start his proposition; a proposition to lure some unlucky fellow to trade blows with Joe Louis as a sparring partner.

Seamon took over Mushky Jackson’s job as a trapper for Louis’ camp. Jackson, after retiring from the position, would say it was hard work trying to find so many able-bodied fighters willing to have their brains rattled loose from Louis’ assault and wished Mr. Seamon good luck. It was one thing to fight Louis for a big purse, but to take a beating in a sparring session or an exhibition was tough on anyone.

Joe Louis retired for good with a record of 66 wins, 52 of those wins by stoppage, accompanied by 3 losses. It’s no wonder why it was so hard to find sparring partners for the Brown Bomber. Louis threw textbook perfect punches and wasted little energy in his assault. His hand-speed was some of the fastest in heavyweight history and he was unbelievably accurate in his attack. It also didn’t hurt that Louis had knockout power in both mitts—when he had his man hurt they didn’t survive. Sparring partners and those he met in exhibitions, even with headgear and 14 or 16 oz. gloves, didn’t fare too well.

Salvatore Ruggirello, a 210-lb. heavy-handed Italian, found out about Joe Louis’ power in his very first sparring session when Joe was preparing for his fight with Max Baer. Ruggirello was brought into camp because he carried a knockout punch in his right hand, Baer’s best punch. At the beginning of the first round of sparring, when Louis was still warming up, Salvatore let a few of his right-hand bombs land flush on Louis’ chin. Louis didn’t so much as blink and then let loose a lightning quick left hook that shook the big Italian all over. Salvatore stumbled to the furthest corner and as far away from his attacker as he could. “I’ve sprained my shoulder. I’ll work out some more, but no more today,” Salvatore blurted out.

There was no shame in being bombed out by the Brown Bomber, even with 12 oz. gloves. In fact, he wasn’t the only one who took a bad beating during that training camp. Lou “Tiger” Flowers, who had been in the camps of Primo Carnera, Jimmy Braddock and Jack Sharkey, took a whipping after angering Louis by getting a little rough with the future heavyweight champ. Louis’ head lowered, his face tensed up, and Flowers never saw the blows coming. A right-hand smash sent Flowers mouthpiece flying and put him into dreamland, mumbling, “what happened? Ooh, what happened?” He was dragged off and finished for the day.

Louis didn’t just have power, speed, and a killer instinct, he was also very crafty and a very intelligent fighter with an unintentional intimidation factor. Roy Williams was a fast and slick light-heavyweight who was brought into one of Louis’ camps for speed drills. When asked about his sessions with Louis, Roy said, “I know that I’m not supposed to be hit with a right hand. But Thursday, I saw the damnedest fighter in the world in action. I’ve been able to feint every man I’ve ever met into some reflex action. He’s either started a punch, moved out, or in some way signaled me what he was going to do, except Joe Louis! Whew! That guy’s got the coldest eyes I’ve ever looked at. He just keeps shufflin’ in with both hands cocked. You throw a punch at him and he just moves enough to make you miss. And then you get ruined. I couldn’t duck ’em because I couldn’t see ’em. And when they land…. God, how they numb you. Joe’s a swell guy outside the ring, but when you lace them gloves on his hands, he only has one thought, that’s to kill. And I thought I was fast. Why I never saw the day I could truck in the ring the way Joe does.”

Lou Nova talked about trying to outsmart Louis, “I wanted to sucker him, draw him out and then counter-punch him. He isn’t fooled easily. And you cannot make even one mistake in there. He is a great champion.”

Tommy Loughran who was a master boxer and very crafty, shared the ring with a mutual sparring partner of Joe Louis, a man named Frank Wotanski who spoke highly of Louis’ underrated boxing and blocking abilities. Wotanski said, “I worked out against Tommy for three weeks and used to land my best punches on him in spite of the fact he is known as a boxing master. I can’t lay a decent punch on Louis and I’ve tried my best. He blocks beautifully. People can’t see half of his inside blocking. He actually can catch punches with his glove.” If there was a great compliment for Louis’ blocking abilities it was in this comparison to Loughran.

Like any craftsman, Louis was only as good as the tools he used. Unfortunately for anyone that stepped into the ring with Joe, they found out he carried the greatest set of tools the heavyweight division has ever seen. His jab shot out with blinding speed and was the hardest in boxing history until Sonny Liston’s. Louis could shorten his jab on the inside or blast it out at long range and be equally effective. Many who felt his jab or saw it live thought it to be one of the best jabs boxing has seen. A man who got to see thousands of jabs up close, referee Arthur Donovan, remarked that, “Principally, he has the greatest left jab I’ve ever seen. Honestly, it’s terrific. The first time he reached out and stabbed Mann with it I heard Natt’s nose crack. He could knock some good men out with it in time and it would cut anyone to ribbons in 15 rounds.”

Mike Jacobs carried the same views as Donovan on Louis’ left jab, saying it was the greatest he had ever seen. Billy Conn, who Louis said possessed the best jab he ever faced, shared the same respect for Joe’s left hand. After their exhibition match in Chicago, a match that Conn was hoping would bring him back into the heavyweight title picture, Conn said, “He’s still the greatest puncher of them. He had me going with those 14-ounce gloves. His left hand is the hardest I’ve ever been hit with. When Louis hits you with that left, it’s like running into a telephone pole.” Louis had battered Conn in the exhibition with ease, even holding back when he had Conn on the verge of a knockout.

Another man who had felt Louis’ telephone pole jab was sparring partner Baby Dutch Culbertson, who insinuated that Louis’ left jab was as hard as most fighter’s right cross. After their sessions, he would be too sore to do anything for the rest of the day and would lay down for hours in agony. The jab is one of the best tools to have in boxing and Louis had one of the best. But it wasn’t his only tool—he was a master of every punch.

Damon Runyon once complimented Louis saying, “Louis’ arms are loose and limber, and they flash out like buggy whips. He is an extremely fast puncher. His right is probably as fast as George Carpentier’s and ‘the lily of France’ had the fastest right we ever saw until we clapped eyes on Louis.”

Such a strong statement brings up one of Louis’ other big weapons, his right hand. One man who was often stingy with compliments for fighters in eras following his own was Gene Tunney, a man who faced Carpentier when the Orchard Man had seen his better days. But even he couldn’t deny Louis’ greatness or how destructive his right hand was. Tunney was asked who the greatest fighter ever was and he simply replied, if Jack Dempsey isn’t, then Joe Louis is. Tunney also remarked, “Joe is the greatest right-hand hitter who ever lived. There never was anyone who threw a right-hand punch with the devastating power that Louis does. Not only is it a tremendous punch, but he throws it so fast. That is the real reason for Joe’s greatness. His speed with his hands. Dempsey’s left hook was a bit faster than Joe’s, but when you take both hands into consideration, Louis is the fastest puncher the game has had.” This coming from a man that often had a bit of nostalgia in his viewpoints.

The blow Louis landed to knockout Paulino Uzcudun, the George Chuvalo of his day, was thought to be the hardest blow that most had seen, including veteran trainer Ray Arcel. It was one thing to see the destruction of Louis’ right-hand smashes and brag on its effectiveness, but no better praise could come from a man that took one of those shots to the chin. Tony Galento was as tough as any man that fought in the ring or out of it and he never received such a blow. Galento described it as such: “It’s like being hit with a five-pound rock studded with razor blades.” 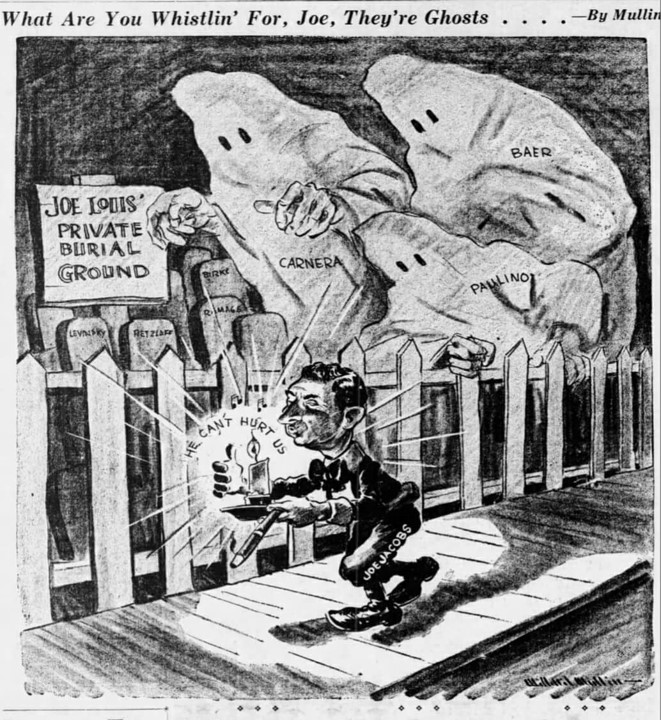 Louis mastered every punch in the book, from the jab to the uppercut, and executed them all with precision, power, and speed. He was consistent enough to rack up 25 world heavyweight title defenses over 11 years, 8 months and one week—two records that still stand today. Even most of the fighters that Louis didn’t get to in regularly scheduled bouts, he met in exhibitions. Even Louis’ exhibition resume is amazing with such names as Jimmy Bivins, Rex Layne, Tiger Jack Fox, Nino Valdes, Bob Foxworth, Billy Conn, Elmer Ray, Al Hoosman, Pat Valentino, Curtis Sheppard, Johnny Shkor and many more.

Louis was a destructive force anytime he stepped into the ring, whether it be his first pro fight or even his last—he was always a threat. Georgie Abrams called him the “greatest fighter boxing has ever seen.”

Otis Thomas, who was a promising fighter in the 1930’s, shared the same views on Louis, calling him the greatest boxer that ever lived. The biggest compliment of all, in my opinion, came from the most feared fighter in history, Sam Langford. “Joe Louis is the greatest heavyweight champion that ever lived. He’s fought anyone the promoters have asked him to fight and all he asks is a referee that can count to ten.”

After watching all the footage available on Louis and other heavyweights from the past and present, as well as hearing the views of so many experts of the sport, I’m inclined to agree with them. Louis is the greatest heavyweight in boxing history.

Requiem for a Welterweight: Who Killed Jeanette Zacarias Zapata?

9 Grueling Truth’s we learned during week 3 of the College...

The Bengals are lifeless in a loss to the Bears, the...

The Dream Team of Super Flyweights