The Grueling Truth - Where Legends Speak / Fight of the Century: Johnson/Jeffries (7/4/1910) Jeffries and a medicine ball

For those that attended the Johnson training camp today the highlight was an unplanned sparring exhibition. Jeffries spent his morning training session fishing. Johnson spent his morning training session punching a large bag, followed by shadow boxing alone, followed by a rigorous workout with a medicine ball. Jeffries spent his afternoon training session involved in a sit down talk with John L. Sullivan and then a baseball game. Johnson spent his afternoon training session by sparring 7 rounds with Al Kaufman and Walter Donohan. Taxi driven spectators paid $5 to watch the back of James Jeffries as he sat on the lawn and spoke with a legend. Taxi driven spectators paid $5 to hear the Champion Johnson announce that a crowd should be entertained as he spontaneously announced for two of his sparring partners to lace their gloves. The 3 rounds with Kaufman has him clinching, wrestling, body punching mimicking the sort of tactics that they believe Jeffries would utilize. The 4 rounds with Donahan feature much of the same, but as the sparring exhibition nears end, for both the sake of spectators and himself, Johnson cuts loose and encourages his sparring partner to throw harder punches.
June 28th…. James Jeffries’ training day was filled with rigorous exercise. Jeffries jogged approximately four miles. There was a limp to his step upon completion. He received a 25 minute massage. Then he began a sparring exhibition with Governor Dickenson in attendance. John L. Sullivan: “(Jeffries) went through some boxing and wrestling stunts, more to please the Governor than for any real exercise.” Jeffries then went fishing to relax his mind and muscles.
Jack Johnson held a more vigorous sparring session. Johnson sparred with Al Kaufman for 4 rounds. Johnson sparred with Dave Mills for 2 rounds. Johnson sparred with Walter Donohan for 2 rounds. Johnson scored a knockout of George Cotton in the 4th round of their exhibition. John L. Sullivan: “Cotton and Johnson went at it for keeps right at the start. Cotton caught the Champion a peach on the side of the head in the 2nd round. Then they tore all through each other in the 3rd round. In the 4th Johnson let up a bit and Cotton kept boring in. He came with a rush once and Johnson let him into a clinch. The Champion’s right hand shot upward, in close, and Cotton went down. He hung to the ropes, and then wilted completely.”
June 29th…. James Jeffries: “I have trained for a long fight, but just the same I am going to try and finish it up quickly. I think that I can get Johnson in one of the very early rounds, and the sooner I see the opportunity the quicker I am going to take it.” Sullivan is noticing a stark difference between the two camps. He remembers his own tenseness before an important bout. He sees this with the Jeffries camp. They are not only tense, but downright rude and inhospitable. The contrast could not be greater with the Johnson camp. Everyone is relaxed and friendly.
June 30th…. Jack Johnson spends an hour exercising before another 8 grueling rounds of sparring. Johnson spars Al Kaufman for 4 rounds. Johnson spars George Cotton for 4 rounds. During the 4th round Cotton accidentally head butts Johnson. The Champion has a split lip which bleeds profusely. Whether enraged or engaged Johnson attacks Cotton with aggressive punches. Professor Burns steps in and halts the exhibition….. Jeffries appears overweight and unconcerned about losing more pounds. He gives himself the day off without further training. He spends the day fishing.
July 1st…. Jack Johnson speaks to his friend, Billy McCarney: “I might as well be a dead nigger as a defeated one. I have gone along pretty well in the past few years, and I have about $100,000 cleaned up. I have a good insurance policy, and I have looked out for my Mother pretty good. She is the only one that I care for in this world, anyhow. I know there are lots of people who are jealous of me, owing to the way I have come up, and I have raised as much rumpus as anybody doing it.”
July 2nd…. A brief interview between a legendary Champion and the current title holder. Sullivan: “How do you feel, Jack?” Johnson: “Captain John, I never felt better in my life. If I felt any better I would be afraid of myself.” Sullivan: “Jack, don’t you feel just the least bit anxious and nervous hearing all this talk about Jeff’s wonderful condition and how they are going to dig his fists out of you when he lands those awful wallops?” Johnson: “Do you know that I don’t feel as much anxiety over this fight as I did just before the Burns fight in Australia. Understand, I wasn’t a bit afraid of Burns, but I wasn’t treated very well over there by the general public…. I was not among my friends and I tell you that I felt a bit lonesome. But this fight is different. I have got lots of friends here and people whom I really know want to see me win.” 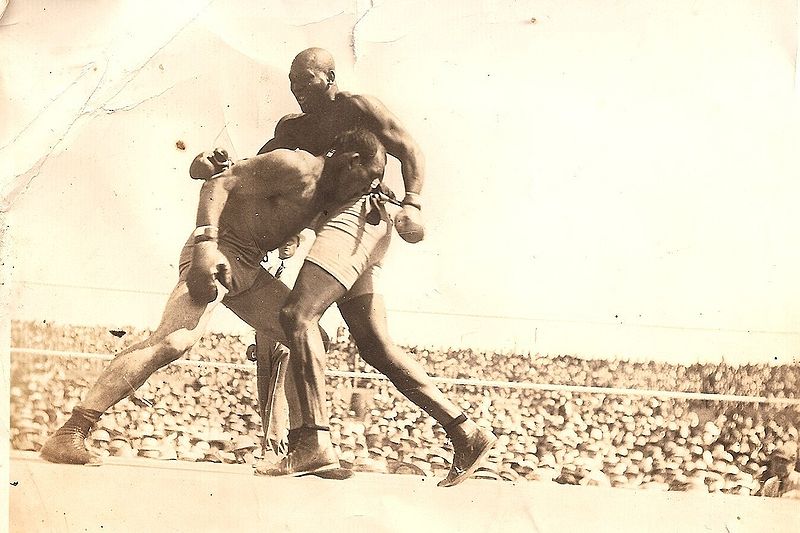