Folks, there is no great milestone imperative here, but in 6 days we are coming up on the 36th year anniversary of Larry Holmes vs Gerry Cooney on June 11th, 1982, so why am I bothering with this article you might ask?

Well, to cut to the chase, I was challenged to provide my scoring on a boxing forum after I noted the official scores at the time of the Holmes stoppage of Cooney showed that Holmes had been out boxed on the cards, only saved by the late low blow histrionics of Cooney as he fatigued in a grueling fight far beyond his previous experience.

Yeah, I know. Heresy to the usual non-engaged, historically uninformed suspects, so I took up the challenge to further the development my scoring improvements of the regrettable 10-point must system that was birthed in the complete non-transparency of the crooked fight biz.

I must also confess to being game to review what I remembered had been a good fight of natural rivals back in the day, only this time score it according to modern updated rules massaged with my own little changes that allows me to see the source of most every controversial scoring decision in boxing, and I was not disappointed. The fight was a great one of traditional boxing give and take of two game fighters, and my scoring uncovered the perception I had ascertained from the official scores. Boxing is the only of what used to be a major sport with incomprehensible officiating, so if it is to survive without going underground in today’s market, which is how the various MMA franchises started, it has to become transparently removed from the incoherency of smoke and mirrors and various fogs of current deceptions that have driven away boxing’s loyal aficionados. And since boxing’s demographic is aging, boxing simply ain’t replacing the dying numbers with a new young cadre of fans.

Because of the racist Great White Hope promotional overtones of Don King, a convicted murderous felon who was the primary instigator of this fight, that and too many other crooked hijinks eventually led mainstream TV to abandon their weekly boxing format. The FBI had snipers stationed on every surrounding rooftop in case of trouble between black and white nationalists bolstered by what,  triple  or quadruple security? Never a good thing for a fighter to be backed by the KKK, so Cooney had a lot of strikes against him before ever entering the ring, not the least of which was over two years of virtual inactivity as many have noted in a still budding career.

A still young Larry Merchant intones the fight is racial, not racist, and uses his cohost, the then still shiny, blemish free, Olympic Gold Medalist Sugar Ray Leonard as his fulcrum to that point. Youngish Mills Lane is the ref looking teensy, but hey ho, years later he thumped Bernard Popkins out of the ring to bust his ankle to make him squall like a slapped schoolgirl, so Mills had some gravitas.

Note: I score fights using modern scoring of the highly belabored 10-point must system of padded out nonsensical points making fights look like basketball scores instead of the single point, round by round deductions that they really are. Since every other big fight is disputed results because of the lack of transparency and integrity of boxing, I mean sometimes these clowns can’t even add up their own scores, I add my own modification of scoring really close rounds EVEN. All other sports record “Even” periods of non-scoring  of the competition, and I have found that in most all disputed fight scoring, the disputed winner is usually the hometown/money fighter winning by the even rounds I score. That explains the perception that the other fighter actually won because he won most of the “big” obvious rounds, whereas the actual winner won all the dinky “even” rounds for a dinky disputed win…only in boxing!

RD1- 10-10 Even/ Spar to start. Lar busy with nonthreatening jab as Cooney feints and stalks. A booming right to the body knocks Lar into the ropes, the first KnockDown under modern rules, but I’m not scoring KDs into the ropes because modern refs are so subjective about it, and back in the day it wasn’t a rule. Cooney some thudding Left hooks to the body as Holmes sharpens his jab, a typical feeling out round on the way to a great fight that we hope for.

RD2- 10-8 for Lar/ Lar dance and jab. A Cooney LHK to body and some 1-2s with booming Left to finish. Lar still busy with jab, but a flashing Right KDs Cooney in a sorta of Ali’s KD of the spiraling Foreman in Zaire. Cooney quickly up but soon reeling into ropes as the round ends. Certainly not the early finish Cooney is used to. 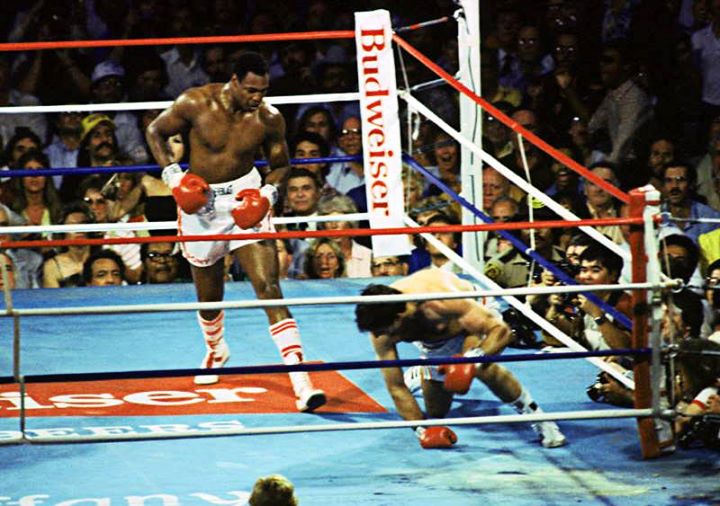 Note: They didn’t score 10-8 automatic KD rds back in the day. This my modern addition to better understand outcomes of classic fights since knockdowns have always influenced judging that might include bleed over to subsequent rounds.

RD4- 10-9 Cooney/ Lar still in reverse as Cooney pics. Lar Left and big Cooney LHK to body and then jabs with combo at bell 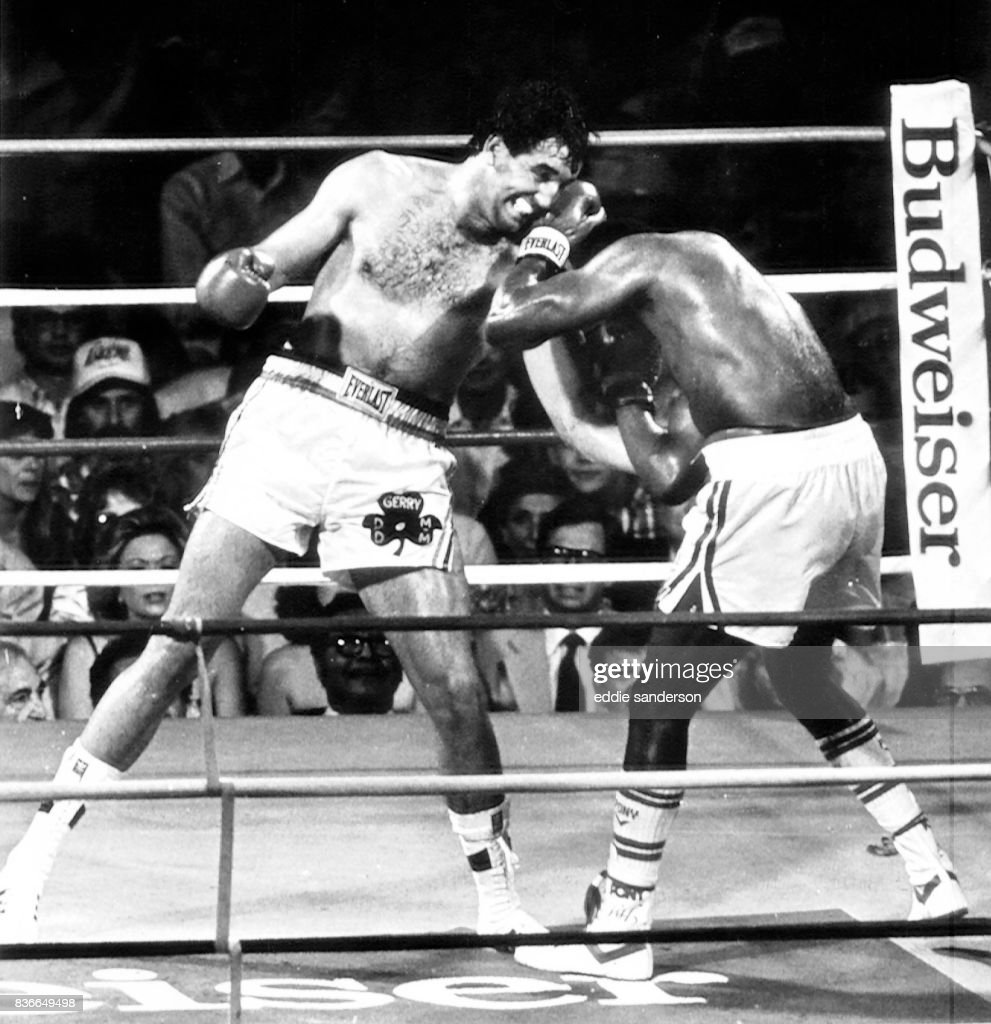 RD5-10-9 Cooney/ Lar flicker jab in reverse as Cooney drives him further back and busy. Cooney R to body before exchanging with Cooney L to body as Lar dance and jab.

RD8- 10-9 Cooney/ Exchange jabs. Cooney LHK body as Lar in reverse. Cooney L body and then combo, but then Lar combo in the back and forth. Cooney Rights and then Lar attack causes Cooney to spit his gumshield, I’d guess to breath better. Exchange ends with Lar in reverse gear. It was speculated in advance that Cooney didn’t really know how to fight or box, but he seemed to relish the action of his first true professional fight he was in after notching all those blowouts. 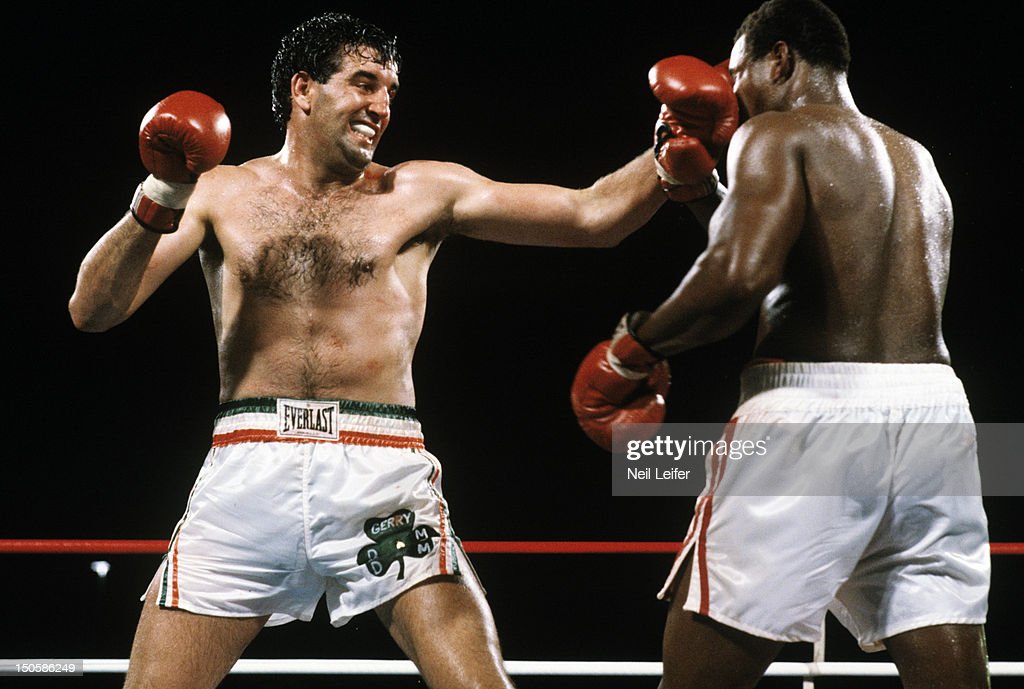 RD9- 10-9 Cooney/ Cooney stalks Lar who jabs in reverse. Cooney Left to body and Lar Right. Cooney combo then Right/Left to body. Lar Right and another Cooney Combo. Cooney deliberate low Left uppercut and time called. I found out later Mills may have deducted a point, but it wasn’t obvious and none of the announcers mentioned it in the moment, so I end up deducting those low blows at the end of the fight. At least one replay shows Lar pulling Cooney’s head down which might explain at least one of the final tally of 3 low blow deductions. A fighter should not be deducted when his opponent deliberately pulls him down to result in a low blow, that’s bad defense any way you cut it, but it happens all the time in boxing who can never keep their rules straight but for the odd cleanly fought bout which this mostly saved for the low blows.

Rd10- 10-9 Cooney/ Lar jab and 1-2. Cooney Left at beltline, then a Right. Whoever said Cooney was one-handed? They lied big time! Now Lar hurt and tired as Cooney pics shots. Big Exchange and Lar in reverse at the bell as usual.

RD11- 9-9 Even/ Cooney deducted for a low blow, the only obvious deduction by Mills. Lar in reverse recovery as Cooney drives him back. Lar Right but then Ref warns Cooney for low blow seemingly on the beltline, another deduction? Hard to say. Both pic at each other to finish, but Cooney shots more telling and booming.

Rd12- 10-10 Even/ Lar dance and attack. Cooney with Left as both pic at each other. Lar gets busy to mix up some punches. but big Cooney L and then body combo to close.

RD13- Cooney trainer Vic Valle says rough Lar up when the round starts. Outside temperature has dropped from 100F to 89F, and surprisingly Cooney has thus far remained fresh well past where he has ever been before. Exchange and then Cooney Left knocks Lar off and then body combo. Good stuff, but then Lar Right and then more Rights before opening up on Cooney who is trying to exchange, but is now hitting the legendary “Wall” dreaded in long-distance track events when your body starts to fail in fatigue. He falls clumsily back, sagging into the ropes as Mills stops the fight to mixed cheers.

Both give kudos to the other in a seeming acknowledgment of their great fight waged. Amazingly there is no apparent racial animosity within the arena that I could detect, but of course, if a fight breaks out in the seats the networks aren’t going to cover it because they are usually quickly broken up. It was a proud night for the common folks in America to witness such a polarizing event so successfully pulled off with no ill feelings afterwards. 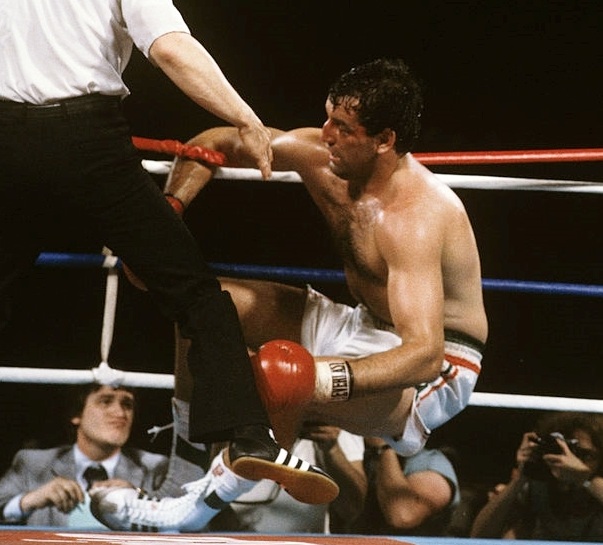 My tallied score by rounds with only the one point deduction is Cooney 7-Lar 2 with Even 3. That translates to 116-112 for Cooney at the stoppage. Now if I deduct the two low blows I missed, it’s 114-112 for Cooney. Now, if I give Holmes the 2 of my hometown even rounds, remember my 3rd even round Cooney would have won but for a low blow deduction that was easily apparent, OK, it gets a little complicated here, but I believe my math sound, it’s 112-112 for a draw, only needing to move a single point on the abacus of their ledger to match the two of the official cards of 111-113.

Viola! I’ll take no stick whatsoever for my scoring and my observation that Holmes needed those legitimate low blow deductions to win the fight if it went to a decision. In regards to the low blow strategy of Cooney, I would think the first and most obviously deliberate low blow was probably an instruction to Cooney by Valle in what was turning into the toughest fight Cooney ever fought. The later low blows seemed more beltline subjective ref calls. Big George later finished Cooney off post-haste as a point of comparison…just rubbin’ it Lar, just rubbin’ it in for some good sport!!

Read More Like This on Bobby Mac’s Boxing Blog