The worst robbery in boxing history?

It was a little over forty-three years ago when Armando Muniz was denied his dream of winning a world championship. The scene was the convention center in Acapulco, Mexico. Muniz was taking on the legendary Jose “Mantequilla” Napoles.

Go to this site for the best place to bet boxing on the internet!

He entered the ring a 6-1 underdog. Napoles seemed to agree as he didn’t look particularly concerned before the opening bell rang.

He should have been.

Muniz was ready that night. He had recently won a decision over talented Hedgemon Lewis to earn his shot. He was in the best shape of his life – and he could see that  Napoles, who entered the fight with 12 successful defenses of his crown, was not.

As was his style, Muniz stayed close to the champion and pounded him. Napoles fired back but by the middle rounds he was feeling his oats. Muniz grew stronger; he was quicker than Napoles and repeatedly beating him to the punch. Napoles grew more desperate, connecting with 12 low blows in the 11th round. 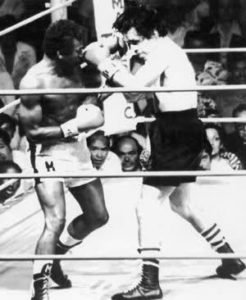 The referee that night, one Ramom Berumen, did nothing. No warning, no words, nothing.

“The eleventh round?  He must have thrown twelve to fourteen intentional low blows and the ref never saw one of them,” Muniz said during an interview a few years ago. “This was never, ever brought up. Boxers have been disqualified for less.”

By the 12th round, the champion was reeling. Referee Berumen was helping every way he could. He engaged in a conversation with a ringside official as Muniz and Napoles swapped punches. Napoles was beaten. Both eyes were swelled up and badly cut.

He needed to be saved, and as Berumen ended his conversation, that’s exactly what happened. Berumen stopped the fight. The ring physician had advised him that Napoles could not continue.

Muniz had done it. He was the world champion. All the years of toil, and time away from his family, had finally paid off. The small paychecks and the bad decisions, none of that mattered anymore. His dream of winning the championship had finally happened.

But no, things are sometimes not what they seem in the shady world of professional boxing. In an amazing scene that must have been shocking to all, referee Berumen grabbed the ringside microphone and declared that Napoles was the winner by “technical decision.”

His cuts had been caused by Muniz butting him.

“Although both of us lowered our heads to avoid punches, the ref only warned me,”Muniz said. At one time even when I lowered my head, after Napoles threw an intentional low blow. When he did this, it dawned on me. ‘Wow, it looks like I have to ‘fight’ against Napoles and the ref’s bias.’ Anyway, he never took points away or declared that his cuts were due to an illegal head butt.”

Look up the word “travesty” in the dictionary and you’ll see: ’make a mockery of…pervert…distortion.”

A word that describes that night in Acapulco perfectly. 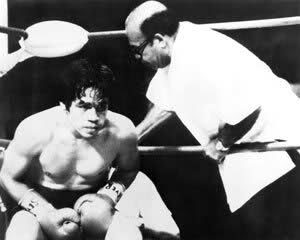 “Without a doubt, I was robbed,” said Muniz. “If you see that fight, the only question one can ask is, were the judges looking for this fight?  When the doctor finally came on the ring, I could read his lips, “ya no puede seguir!”  (he can’t continue).

“Now keep this in mind.The ref never stopped and penalized me for butting. In the rule book, this is automatically a TKO.

Muniz was the 1968 AAU golden gloves champion while serving in the U.S. army. He turned professional in 1970, and quickly worked his way up the ratings. He won the NABF championship from Clyde Gray in 1971 (in what was considered an upset) and held the title for two years. He defeated many fighters that the experts said he shouldn’t have.

The “loss” to Napoles was hard for Muniz to overcome. He drew strength from his family, especially his wife.

“I know she hurt inside for me, because she knew what it meant to me and she saw the sacrifices I made to reach that point in my career as a pugilist,” Muniz said. “The look on her face told me everything, but she did so much to make me feel OK. The fact is, everyone knew what had happened that night.  And actually, I never broke down, because I wanted to show her that I did not lose that fight.  She was my biggest and closest fan.”

“Well, I am proud of the fact that Carlos and I were the first (and maybe the last for a while) boxers to ever fight for a world title and both of us being college graduates, said the classy Muniz.

But it’s his fight in Acapalco that defines him. Muniz fought under the nickname of,”The Man.” That’s what he was that night in Mexico.

And that’s why, when fans greet him, they call him “Champ.”

Previous article
« The Most Unstoppable Shots in NBA History
Next article
Harold Carmichael: The Original Megatron »