I thought about making a list like this for the University of Cincinnati, but half of their top-10 happened like 50 years ago! So I figured that since Xavier was now the big brother in the city of Cincinnati when it comes to college basketball, I might as well just make a Xavier list. I tried to limit the number of wins over Cincinnati because there are so many. Check out the best new sports betting sites out!

Xavier got possession with seven seconds left after the ball came loose in a crash between Xavier’s Michael Davenport and Cincinnati’s Lou Banks. Referees said the ball came off Banks.

The Bearcats were up by six with a minute left in overtime; Bearcats fans and Bob Huggins always seem to forget this and the final score was 90-88, Xavier. The game was UC coach Bob Huggins’ Shootout debut. The animated Huggins chased the referees off the court because he was just a loud-mouthed blowhard who liked to drink and lose in the first weekend of the NCAA Tournament!

Check out the top sportsbook for betting on college basketball

St. Joe’s entered this game undefeated, and the Musketeers shut that down in a big way by blowing out the Hawks and putting themselves in the tournament. In the upset, XU senior guards Lionel Chalmers (23 points) and Romain Sato (24) shot a combined 19-of-25 from the field. The Muskies actually led this game by as much as 37 points.

This had to make the list because Xavier owned Bob Huggins even when he moved over to West Virginia.

The third-seeded Musketeers jumped out to an 18-point first-half lead over West Virginia, lost a 2-point lead in the last 14.5 seconds of regulation, trailed by 6 points in overtime but finally outlasted the seventh-seeded Mountaineers, 79-75, in the West Region semifinals. The backup forward B. J. Raymond hit two 3-point shots in the final 1 minute 22 seconds to seal the victory. All 8 of his points were scored in overtime.

I know your thinking how did an NIT game make this list? It’s simple, Xavier was hosting Ohio state, and it was a home game for the Muskies. In 1984 the NIT was still a big deal, especially for mid-major teams. This game ended up being an absolute classic in front of a packed house at the Cincinnati Gardens. A nail-biter to the bitter end, Xavier won 60-57 in overtime.

Legendary Xavier Play by-Play man Andy MacWilliams had the iconic call as the Muskies upset the number one ranked team in the country: “The Cincinnati Bearcats number one in the country and number two in their own city!”

How good was this UC team? I will tell you; they had Ruben Patterson, Danny Fortson, Damon Flint, Darnell Burton. Bob Huggins led the Bearcats to a 26-8 overall record, 14-2 in Conference USA. This game was played early in the season, with both teams coming into the game with 1-0 records. The Muskie’s defense was the difference in this game as they caused 21 turnovers from the Bearcats as once again Bob Huggins was out-coached as Lenny brown hit a buzzer-beater for the Muskies to win the shootout. 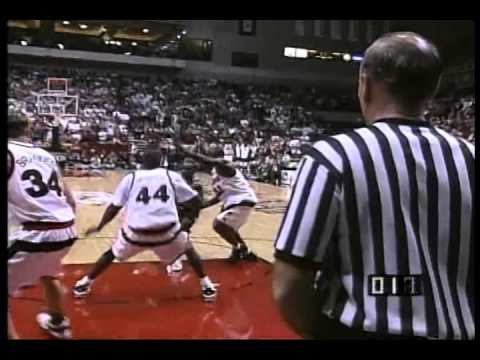 This was the Musketeer’s first NCAA Tournament win. Xavier was seeded fourteenth, and Missouri was the three seed. Xavier, led by Byron Larkin’s 29 points, pulled the first upset of the NCAA Tournament on that fateful Thursday by eliminating No. 14 Missouri 70-69. The taller Tigers were out-rebounded 44-29, and Xavier used its outside shooting and quickness to contain Missouri in the second half. Larkin made two free throws with 31 seconds to play to give the Musketeers a 70-66 lead. Missouri’s Lynn Hardy made a 3-point shot with 14 seconds to go, but Xavier ran out the final frantic seconds. The Musketeers almost played giant-killer again in the second-round game against heavily favored Duke but came up 5 points short.

Check out the top sportsbook providers for betting on college basketball

In 2004 the Xavier Musketeers got hot at the start of the A 10 Tournament and went on run Musketeer fans will never forget, beating an undefeated St. Joes. They were even better in the second round of the NCAA tourney when they blew the doors off a shell-shocked number 2 seed in the Mississippi State Bulldogs. Lionel Chalmers epitomized the fall and rise of Xavier that season, scoring a career-high 31 points and rallying the Musketeers from a 10-point first-half deficit. Chalmers sank 11 of 13 shots, Dedrick Finn scored 22 points, and the freshman Justin Doellman added 13 as Xavier, seeded seventh, defeated Mississippi State by hitting 68 per cent of its 3-point attempts (13 of 19). The Muskies shot better from three-point range than they did from two-point range.

The Musketeers, who lost starting point guard Edmond Sumner in January and slumped into the tournament as an 11 seed, were headed to the Elite Eight after a 73-71 upset of the No. 2 Wildcats at SAP Arena, scoring the game’s final nine points over the final 2 minutes, 37 seconds. Xavier got 25 points from Trevon Bluiett and 14 from J.P. Macura, who sliced up Arizona’s defense all game long, creating good looks for himself and his teammates. Xavier shot 53% for the game, getting an easy layup with 40 seconds left on a feed from Bluiett to big man Sean O’Mara rolling to the rim. That play completed the comeback for Xavier, which fell behind 69-61 with 3:44 left. Xavier took over from there, scoring every point during the last few minutes to pull an upset and comeback of epic proportions! The 1957-58 Musketeers actually became the first school from Ohio to win a national championship in basketball by winning the 1958 National Invitation Tournament. The NIT at this time was still considered a huge deal as very few teams made the NCAA Tournament and there was a time when the NIT was considered the bigger of the two titles. Led by first-year head coach Jim McCafferty, the Musketeers defeated Niagara, Bradley and St. Bonaventure to reach the NIT championship game at Madison Square Garden in New York. In the final, Xavier defeated rival #11 Dayton 78-74 in a classic overtime game. Sport Magazine called Xavier’s Cinderella run “one of the greatest upsets in basketball history.”

Xavier in 1990 had Tyrone Hill and an experienced team that had lost in the previous two NCAA Tournaments to the eventual National Champions. Entering this second-round matchup they were coming off a first-round victory over Kansas State and not many gave the Musketeers much of a shot against the highly-ranked Hoyas led by Mutombo and Mourning. Somebody forgot to inform the Musketeers they couldn’t win as Xavier squeaked by the Hoyas in front of a large crowd in Indianapolis. The Muskies would come up short in the Sweet 16 to the Texas Longhorns, but this game informed people that Xavier was more than just a tiny mid-major program.

NFL Prediction Show: Week 9 Picking all games against the spread
Our Reader`s All Time Favs