The Miracle in Wingate

Everybody knows the story of the Milan Indians – or at least the fictionalized version, the Hickory Huskers, dramatized in the movie Hoosiers. However, barely anyone has heard of the  1912-13 Wingate basketball team. Check out the top basketball odds.

Their season was even more remarkable than the 1954 Milan Indians.

Where is Wingate High School, and what makes the story unique?

Tucked away in the Northwest part of Montgomery County, the 1910 census showed 440 people. Wingate High School boasted only 67 students in the entire school and just 22 boys. Quite a bit more girls than boys, but 22 is insufficient to pick from if you are fielding a basketball team.

Low numbers were not the only problem Coach Wood faced. The Wingate team had no gym. To practice, the team would go to the basement of the school. When the weather was nice, they would go outside to practice, but if you grew up in Indiana, you know that little Wingate didn’t get out much(It gets cold). Wingate played their home games at nearby New Richmond high school. Most of their games were on the road. The team logged 576 miles during the 1912-13 season and 1,675 miles of travel during the 1913-14 season. They made most of their journey via trains and interurbans. It wasn’t just the size of their school that Wingate had to overcome. More obstacles popped up all the time.

How did Wingate overcome these obstacles?

Coach Wood had been an outstanding player himself at Indiana State University. So when he arrived at Wingate, he immediately began changing how things were done. First, he started scheduling games with more prominent schools. This wasn’t a common practice before Wood became the coach. He also unlocked the potential of a lanky sophomore with no playing experience. The kid had a great name, Homer Stonebreaker!. He molded Stonebreaker into the best big man in the state. Newspaper reports at the time called Stonebreaker unstoppable.

Wingate went 16-4 in the regular season and even registered a win by 100 points. Wingates best season came at a great time. The year 1913 was the first time Indiana would have a wide-open state tournament. Thirty-seven teams entered the tournament. Wingate was one of them.  Reporters for the Indianapolis papers didn’t even know where Wingate was located.

The tournament’s first game featured a crowd of just 50 people watching Wingate battle Whiting. The group was small because everybody assumed Whiting would win easily. However, the boys from Wingate had different ideas and handled Whiting with relative ease 24-12.  That same night Wingate made everyone take notice. They took on and defeated one of the tournament favorites Rochester, in overtime, on a basket by Stonebreaker.

The magical run seemed over in the next round as they fell behind Indianapolis’ Manual Training High School 11-2 at halftime. It looked like the city boys from Indy would send the country boys from Montgomery county packing. But, the determined boys from Montgomery county bounced back and outscored Manual 14-0 for a 16-11 upset in the second half. Wingate had advanced to the semi-finals and Crawfordsville, Lafayette Jefferson, and South Bend – all big schools. Nobody thought Wingate had a prayer of going any further.

The first semi-finals game found Wingate playing Lafayette Jefferson as usual; Wingate was a big-time underdog. The minor team that could end up winning convincingly 14-3. The win sent them to the state championship game.

The championship game was a classic David vs. Goliath match-up. Wingate’s opponent, South Bend, was favored by a crowd of nearly 3,000. Modest applause welcomed Wingate when they took the court. The game was expected to be a blowout. Most figured that Little Wingate would be lucky even to be competitive against powerhouse South Bend. The game was a slow-paced defensive battle. Again defying all the odds, Wingate clung to a 13-12 lead in the final minute. South Bend got fouled on their final position and made a free throw which sent the game to sudden-death overtime.  Overtime back then was different than today. The first team to score two points in overtime was the winner. South Bend scored immediately with a free throw. The teams battled for the next eight minutes. Nobody could score. Then something miraculous happened. Wingate forward Forest Crane broke free from his defender and nailed the winning shot. Wingate had done it.

Check out some great sportsbooks for betting on basketball

A lot of people believe “Hoosier Hysteria” was born the day Wingate upset South Bend. I don’t know if that’s true. But I think it’s safe to say that Wingate played a large part in making the Indiana High School basketball tournament the biggest of its kind in this country.

The following year saw the Milan Indians’ first-ever tournament game. Who did they play, you ask? You guessed it, Wingate High School. Wingate destroyed Milan 42-14 and proceeded to win the 1914 stage championship final by defeating Anderson High School. Anderson’s population was 22,467 – which was 22,000 more than little Wingate. Unfortunately, the championship game wasn’t even close as Wingate embarrassed Anderson 32-8.

The team that most people think of, in regards to the IHSAA Basketball Tournament, is Milan. Don’t get me wrong, the Indians are a great story, but it’s not the only one that should be told.

Over the next few months, we will bring you stories of the IHSAA basketball tournament that you may not be familiar with. 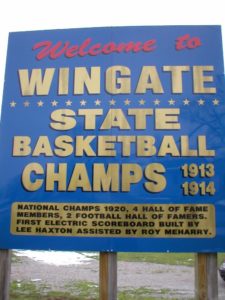