Everybody should know the story by now of how the all black Texas Western team beat the all-white Kentucky Wildcats to win the national championship in 1966. It was a great achievement at that time, and would go on to be one of the biggest athletic accompishments of the civil rights era. But it wasn’t neccarsally a precedent. In 1963, an upstart team from Loyola-Chicago took the college basketball world by storm by defeating defending two-time NCAA champions Cincinnati Bearcats in an overtime classic.  What was special about that game? Four of Loyola’s starters where African-American.

The Legacy of coach George Ireland

Coach Ireland doesn’t get the respect that he deserves as a coach, or a man. Loyola and Ireland where verbally abused during many games because of the racial makeup of the team. But it had no affect on him. Ireland was a loner-coach who just wanted to win and didn’t care what color his players were. The team was most notable for breaking the so-called “gentlemen’s agreement” among coaches, in which no more than two black players would be on the floor at one time (and in some road games, black players would have to rotate so that only one of them was playing at any given moment) The Ramblers would regularly have three or four black starters. Ireland didn’t care about this rule and basically thumbed his nose at the so-called and racist, gentleman’s agreement.

This was the handshake that shook up the college basketball world. Jerry Harkness met Mississippi State player Joe Dan Gold at center court and shook hands. 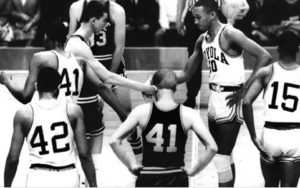 What made the handshake so memorable? A few months before the two shook hands, U.S.Marshal’s and Federal troops were brought in to quell rioting as African-American James Meredith integrated to Ole MIss, which is located just 90 miles from Mississippi State University. A month after the Mississippi State-Loyola game, Reverand Martin Luther King Jr. penned his famous “Letter from a Birmingham jail.” On top of all of this was the fact that the Mississippi State team had snuck out of Starkville to even play in the game. Why did they have to sneak out? The reason now seems almost unimaginable. A state injunction had been imposed to stop the team from playing against a predominately black basketball team. The thing that really amazes me is that this went down only 54 years ago. Stunning.

Was Loyola really a Cinderella team?

Not really. Loyola actually entered the tournament ranked number three in the country and had compiled a record of 24-2. The Ramblers began their title run with a convincing blow out of Tennessee Tech. They defeated Mississippi State 61-51 in the regional semi-final. Then in an all-Illinois showdown, the Ramblers dominated Illinois 79-64 – sending them to the Final Four. This group was to dominant to be a Cinderella team.

Loyola was matched up with Duke in the national semi-finals. They made quick work of the Blue Devils, beating them by 20 points. Defending back-to-back national champs, the Cincinnati Bearcats, waited for Loyola in the championship game. While Loyola was not a Cinderella, they were a fairly large underdog entering this title tilt.

Loyola and Cincinnati played entirely different styles of basketball. Loyola played very agressively on offense, and their defense frequently pressed the opposition. With an average point output of 93.9 per game, Loyola led the country in scoring. Jerry Harkness posted a team-high 21.4 points per game, and four other regulars—Les Hunter, John Egan, Vic Rouse, and Ron Miller—each averaged more than 13.0 points. Rouse was the Ramblers’ leading rebounder, averaging 12.1 rebounds per game.

Cincinnati was more methodical on both sides of the floor. Egan, Harkness, Hunter, Miller, and Rouse started and played the entire game for Loyola. This marked the first time in NCAA championship history, that the finals featured over half of the starters as African-Americans(7).

The Bearcats dominated most of the game. With 14 minutes left in the second half, and up 45-30, Bearcats star George Wilson picked up his fourth foul. With Wilson on the bench, the entire complexion of the game changed. With eight minutes left, the situation got worse for Cincinnati as Tony Yates and Tom Thacker both picked up their fourth fouls. Th Bearcats still led 48-36, but Loyola now had all the momentum.

There was no shot clock back then, so Bearcats coach Ed Jucker decided to play stall ball. But the move backfired. It took the Bearcats out of any offensive rhythm. Loyola closed to within three points  after an 18-3 run. With 12 seconds left, and the Ramblers trailing by a point, Loyola star Jerry Harkness fouled Larry Shingelton – who made one out of two free throws, extending the Cincinnati lead to 54-52. With time about to expire, Harkness saved the day by hitting a clutch 12-footer – sending the game to overtime.

In overtime, both teams were cautious basically playing a high stakes game of cat and mouse. The score stood at 58-58 with seven seconds left. Loyala had the ball. Harkness drove to the basket but elected to pass to Hunter, who attempted a shot. His  effort bounced off the rim, but Rouse rebounded the ball and scored with one second left on the clock. Time expired before Cincinnati could inbound the ball.

The Loyala Ramblers had won their first national championship in men’s basketball by the score of 60–58.

So this week as Loyola tries to win another national title, and they show images of Jerry Harkness and his 1963 championship team, remember that Harkness and his teammates were more than just a national champions. They kicked down the door of racism. If they win, the 2018 Ramblers might be a Cinderella team, but their story won’t compare to what the 1963 Ramblers achieved.