John Wooden: “The Wizard of Dishonesty”

The Wizard of Dishonesty!

John Wooden brought a squeaky-clean image to college basketball. He’s looked upon as the kindly old grandfather of the college game.  Wooden brought the pyramid of success to the coaching world. If you look at it closely, you will find that it is indeed a very useful tool for young coaches. Wooden used it with great success. Unfortunately, his pyramid, when taking a closer look, is nothing but a sham. I know, I know, “The Wizard of Westwood” a fraud? Bare with me, and I’ll explain exactly my reasons for writing this. 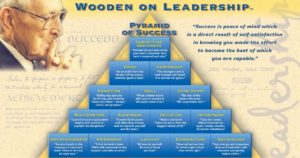 I’ll get to why I split Wooden’s career into two periods in a minute. In John Wooden’s first 19 seasons, he lost a total of 137 games, qualified for seven NCAA Tournaments, three Final Fours, and won two National Championships. That’s the record of a Hall of Fame coach, but not of the greatest coach of all-time. From 1966-67 until he coached his last game in 1975, Wooden made it to nine Final Fours and won eight National Championships. Why was Wooden’s success so drastically different over the last nine years of his career? Check out our top basketball betting strategies.

Who was Sam Gilbert?

Sam Gilbert owned Sam Gilbert and Associates, a construction company that built homes and commercial buildings in the West Los Angeles area. He developed inventions, including metal studs and door locks that made him wealthy. Gilbert had attended UCLA in the 1930’s but had never received his degree. Gilbert became involved in UCLA basketball sometime around the 1966-1967 season when UCLA player Willie Naulls brought Lew Alcindor (famously known as Kareem Abdul-Jabbar) and Lucius Allen to him for counseling. He opened up his Bel Air, Los Angeles home (near Beverly Hills) to the players, and became an adviser to many.

What did Gilbert do to help the program become dominant?

Gilbert held dinners at his home and provided UCLA players with advice, counsel, and much more. He was known as “Papa Sam” to UCLA’s collection of All-Americans — he even negotiated NBA contracts for the players.

“There were two people I listened to,” former UCLA star Lucius Allen once told The Times. “Coach Wooden as long as we were between the lines. Outside the court,  Sam Gilbert.”

Wooden was wary of Gilbert but generally turned a blind eye. He later admitted that he had what he called “tunnel” vision. Do you really believe that a man who was so seemingly in control of his team did not know what was going on?

A 1981 Los Angeles Times investigative series, which interviewed 45 people connected with the UCLA basketball program, established Gilbert as, “a one-man clearinghouse who has enabled players and their families to receive goods and services usually at big discounts and usually at no cost.”

The paper quoted Brent Clark, an NCAA field investigator who said that, in 1977, he was told to drop his case in Westwood. “If I had spent a month in Los Angeles, I could have put them on indefinite suspension,” he said of UCLA. An NCAA spokesman disputed this claim, saying that Clark was living in a “fantasy world.”

Of course, the NCAA didn’t want the black eye that would have come with taking away nine NCAA Championship banners from UCLA. So nothing was done and the NCAA made the problem go away. As a consolation, likely because of the Time’s investigation, the NCAA decided to strip UCLA of its 1980 NCAA Championship game appearance.. But they did nothing about the rampant cheating when coach Wooden was in charge.

Did Gilbert really help UCLA that much?

The people that do know about Gilbert will usually say Gilbert was never found to have helped Wooden with recruiting. While that’s true, do you really expect me to believe that word didn’t get around the entire country that a player will be taken care of if you choose to go play for UCLA? Remember the Bruins record before Gilbert got on campus and started providing perks for the players. When you compare Wooden’s record before Gilbert arrived, to his record after Gilbert got on campus, I would think it would be hard to believe that Gilbert did not help Wooden’s winning percentage.

Check out the top sportsbook sites

Should Wooden’s legacy be tarnished?

No doubt that it should be tarnished, but it hasn’t been and it won’t. When you look up this issue up on the internet, very few have chosen to write about it. I find that hard to believe. It’s one of the biggest scandals in the history of college sports. Let’s face it, Wooden has a lot of competition there. Too bad that the NCAA is one of the most corrupt organizations the world has ever known. Until its put out to pasture, college sports will always have a black eye. Check out and compare the top basketball odds!

As for Wooden, I have no doubt he is one of the greatest coaches ever, but when looking at the evidence, it is hard for me to believe that he is the greatest.

In 1981, Wooden told The Times, “There’s as much crookedness as you want to find. There was something Abraham Lincoln said — he’d rather trust and be disappointed than distrust and be miserable all the time. Maybe I trusted too much.” To this, I call absolute bull shit! Wooden carried himself as a man of integrity and to see him not own up to what he allowed to happen is sickening. There is NO doubt he knew what was happening and he allowed it. I say the same with NCAA. They knew what was happening and choose to do nothing.

What I take away from this whole episode is that all men are fallible. No man should be put upon a pedestal, especially when he’s just a basketball coach.