5 Takeaways as Indiana gets dominated by Penn State 85-66

The three-point defense was non-existent

Indiana didn’t know that the Nittany Lions had attempted 27.9 3s per matchup, at least it didn’t look like they knew. Penn State was successful in 18 of its 31 attempts at 3-point shooting against Indiana.

Indiana was constantly over playingthe gaps, giving Penn State comfortable looks beyond the arc. The Hoosiers treated Penn State like an athletic team with powerful guards rather than a team that makes 38.3% of its 3s. IU was too helpful, went under screens at inappropriate times and didn’t rotate well enough for the Nittany Lions.

Sometimes it seems like the Hoosiers don’t know who they’re playing. Adam Funk and Seth Lundy combined, hitting more than 40% of their 3s against IU, for 48 points and 14 made 3 point shots. Mike Woodson has not done enough to prepare his team for their opponents. Indiana was shocked at the number of 3s Penn State shot. How can you defend a team like Penn State in this way?

This is not a new trend for Indiana. In IU’s seven previous games, the Hoosiers have given up 69 of 159 (43.3%) by opponents from deep. There is something wrong with Indiana’s perimeter defense.

They help at inappropriate times, get caught under screens, double when they shouldn’t, and give up open looks. In all actuality, the Hoosiers defense has regressed from last season. 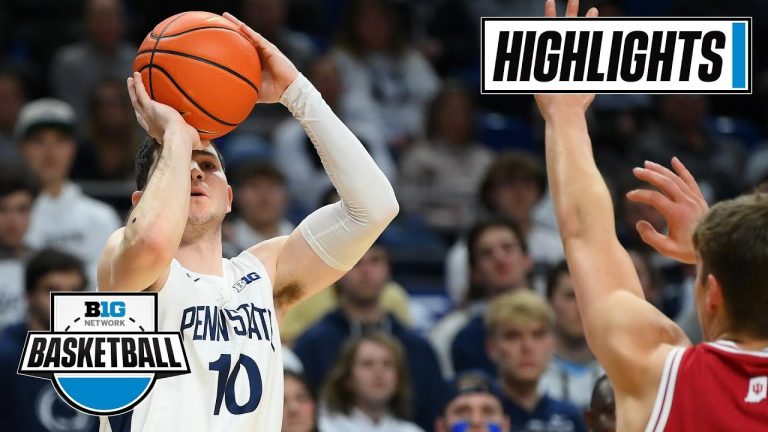 Threes and frees a problem once again

Indiana was just 4-of-14 behind the 3-point line and only 10-of-18 at free throws. Penn State was able to make more threes than IU attempted. The Nittany Lions were able to outscore the Hoosiers 54-12 beyond the arc. IU had 14 more free throw attempts than PSU, but Indiana couldn’t capitalize on that advantage.

If you can’t defend you better be able to shoot and the Hoosiers did neither in this game.

The Hoosiers are a two-man show

The Indiana role players and bench have been nonexistent as of late, and the offense is a two-man show with Davis and Schifino.

Against Penn State, Jackson-Davis scored 14 points on 4-for-10 shooting, while Hood-Schifino had 11 points and was 5-for-15.

IU’s role players have not been involved enough offensively. When opposing defenses can gameplan for two players, defending becomes a much easier task.

With Race and Xavier out of action, the Hoosiers have not found anyone that can lighten the load on Schifion and Davis. It is very easy to coach against a team when you only have to defend two players.

Officially, the Hoosiers have returned to bubble watch

The bubble: Indiana fans have known this place well for the past half-decade. In less than one week, Indiana went from being ranked to being a bubble team.

The Hoosiers currently have two wins against predicted NCAA Tournament teams (Xavier and North Carolina). They are currently 1-4 in Big Ten play and have lost six of nine Power 6 matchups. This is the resume of a team who should be crossing its fingers that it makes the NCAA Tournament in mid-January. The Xavier win was great but how much weight will it hold in March as the game was played in November? Does anybody think Indiana could go to Xavier and win right now? The Musketeers have improved a lot since that November meeting as they Hoosiers have regressed. I know the Hoosiers have two important injuries, but the narrative was that this team was so deep it could field two starting fives.

IU fans need to be prepared for two months’ worth of grueling discussions and resumé arguments. This team is not a “tournament-locked” team, so the Hoosiers better get this figured out quickly.

On Saturday, Indiana will face Wisconsin. While I won’t call it a must-win game, I would advise the Hoosiers not to lose to the Badgers on their home court if they want to be back in the field of 68 in March.

Does this Woodson team look any different than the Archie Miller teams we saw play for a few years? Intensity is not there for the Hoosiers; they can’t shoot, they turn the ball over too much, stop me when I am wrong. At some point, accountability has to fall at Woodson’s feet, and so far, he has been treated differently than Archie Miller or Tom Crean were.

I’m sorry, but a team’s effort is directly correlated with coaching, and the effort has not been there for these Hoosiers.

Maybe as a fan base, Hoosiers have to realize that it is not thirty years ago, and those times are passed. I know that’s something none of us wants to admit, but…..

Is this season saveable? Sure it is but that turnaround would start with effort, and I am sorry I know I am being negative. In the past week, the Hoosiers have lost at home to Northwestern and been blown out and manhandled by Penn State. I know two of the Hoosiers’ best players are hurt, but that’s just an excuse; those players being hurt should not affect your effort.

Woodson was supposed to be a defensive expert, but that has not come to fruition. Have I given up on Woodson? No, I think a lack of experience hurts here, as he had never coached college basketball until last year, but by now, this should have been figured out. Woodson was a solid NBA coach, but this is not the NBA. In the NBA, the best coaches, for the most part, are babysitters that learn how to deal with spoiled players being paid a ton of money. In college, you actually have to coach. It’s time for Coach Woodson to get this figured out. I don’t mind the Hoosiers losing; I hate to watch the general lack of effort.