The Grueling Truth - Where Legends Speak / The Nasty Boys: The Heart of the 1990 Reds

The decade of the 1970s was a great time to be a Cincinnati Reds fan, with four world series appearances, winning two. The ’80s were not kind to the Reds, however. They had the best baseball record in 1981 but were left out of the playoffs because of the split season during the player’s strike. In 1982, the Reds lost over 100 games for the first time in the team’s history. Pete Rose returns to “save” the day in 1984, which led to multiple second places near-misses and, of course, ended in a gambling scandal.

Enter Lou Pinella in 1990; the Reds came from nowhere to become the first team in National League history to lead from day one to the season’s final day. Of course, the Reds had multiple talented players like Barry Larkin, Billy Hatcher, Eric Davis, Paul O’Neil, etc… But, when you talk about the 1990 Reds, the players that first pop into fans’ minds was the “Nasty Boys,” three wild and crazy relievers who could do no wrong for one magical season.

The three guys I am talking about were: Randy Myers, Rob Dibble, and Norm Charlton. They were all relatively young — Myers and Charlton were 27 years old, Dibble 26 — and Lou Piniella went to them constantly to end games after the sixth inning. Charlton was moved into the Cincinnati rotation midway through the season before switching back for the postseason, and that year, he threw 154 1/3 innings in 56 games, striking out 117. Dibble threw 98 innings in 68 appearances, striking out 136, and Myers had a 2.08 ERA in 66 appearances, accumulating 31 saves.
But their reputation was entirely made in the postseason when the trio allowed one earned run in the National League Championship Series (against the Pirates) before shutting out Oakland for 8 2/3 innings. So all told, the Nasty Boys allowed one earned run in 24 innings in October. So let’s look at each of the Nasty Boys from the 1990 season. Check out the top sportsbooks for betting on baseball.

Charlton was a fearless baseball player best known for running over Mike Scioscia, the Dodgers catcher, in a Sunday night ESPN nationally televised game. He was both a reliever and starting pitcher. He was moved to the rotation mid-season and then back to a reliever role for the playoffs.

After pitching with the Reds, Charlton was also a vital member of the two most beloved Mariner teams. First, during the 1995 “Refuse to Lose” team, the first Mariner team to reach the playoffs, he was the team’s closer after a midseason trade. Then, as a member of the 2001 team that won an MLB record 116 games, he was a lefty specialist, fleshing out a bullpen that also featured Japanese closer Kazuhiro Sasaki, Jeff Nelson, and fellow lefty Arthur Rhodes. Dibble possessed a blazing fastball and was not afraid to brush back a batter with it or even hit him, for that matter. He was an MLB All-Star in 1990 and 1991 and was the 1990 NLCS Most Valuable Player (along with fellow “Nasty Boy” Randy Myers).

During his career, Dibble was known for his temper. In July 1989, he hit Mets second basemen Tim Teufel in the back with a pitch; Teufel then charged Dibble, causing a bench-clearing brawl. After saving a game in April 1991 despite giving up two runs in relief, Dibble threw a baseball 400 feet into the center-field seats at Cincinnati, inadvertently striking a woman. He was also involved in a brawl in 1991 with Astros shortstop Eric Yelding. Later in the 1991 season, he was caught attempting to throw a baseball into the back of Cubs outfielder Doug Dascenzo as he ran down the first base line and was subsequently ejected from the game. Dibble also was involved in a brawl with manager Lou Piniella in the Reds clubhouse after a game in 1992. Let’s say Dibble was high-strung! But, let’s face it, that’s part of what made him so effective; he threw hard and with bad intentions. Myers was traded to the Reds in 1990 for closer John Franco and became one of the league’s elite closers and the most successful member of the Nasty Boys trio. Myers was selected as an All-Star in 1990. In addition, he was named co-MVP of the 1990 NLCS with teammate Rob Dibble. Myers also recorded the save in game 4 in Oakland, clinching the World Series for the Reds. The Reds, for some reason, experimented with Myers as a starter in 1991, a move that proved highly unsuccessful as he posted a record of 6 wins and 13 losses.

Myers had the most successful career of all the “Nasty Boys,” winning two Rolaids Relief Man of the year awards and being selected to 4 all-star teams. 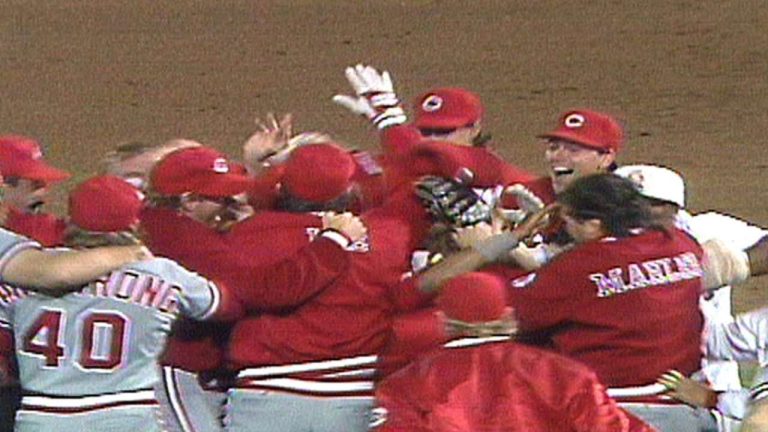 Check out the top sportsbook bonuses for betting on baseball!