The Grueling Truth - Where Legends Speak / Baseball / Pete Gray: The one armed wonder!

Pete Gray: The one armed wonder!

Pete Gray was born in the mining town of Nanticoke, Pennsylvania on March 6, 1915. He was one of five children born to Lithuanian immigrants, Antoinette and Peter Wyshner. Pete’s father worked in the harsh coal mines of northeastern Pennsylvania to support his large family. Pete was right-handed until he lost his right arm at the age of six when he got into a truck accident in 1923. The arm had to be amputated above the elbow. He never could remember exactly how it happened and several versions of the story have emerged throughout the years. One of the final versions had it that Peter was sitting in a truck with friends and fell off. His arm got stuck in the spokes of the old fashion wheels. After the accident, the driver dropped him on his family’s porch and ran off. Gray’s enthusiasm for baseball led him to learn to bat and field one-handed, catching the ball in his glove and then quickly removing his glove and transferring the ball to his hand in one motion.

Seven years after his accident he completed his formal education and began working as a water boy at the Truesdale Colliery at the age of 13. Life would not be easy for him, and he would not take being treated with sympathy or being treated differently than others. One story that was told about his frustration with being treated differently was while a young man playing in a sandlot. He ran home and crashed into the catcher, which helped knock the baseball out of the catcher’s glove. This resulted in Peter being safe at home plate. The catcher was very upset and told Peter that he would hit him, if only he had two arms. Peter didn’t take this well and got into the face of the catcher and told him to go ahead and try.

By 19 years of age, he was playing outfield for the Hanover Lits Baseball Club of the Wyoming Valley Anthracite League. Later he went on and played semi-professional ball with Pine Grove in Pennsylvania and Scranton in Brooklyn, New York. He had tryouts with the St. Louis Browns and Philadelphia Athletics but was never called up by either team. He continued to play semi-pro and minor league baseball.

In 1941, after the attack of Pearl Harbor, Gray attempted to join the Army. Unfortunately, he was denied on the basis that he was an amputee. Gray was quoted about being denied entrance into the Army that, “If I could teach myself how to play baseball with one arm, I sure as hell could handle a rifle.”

His speed and place hitting ability made him a successful minor league outfielder. Gray attained a batting average of .333 and a stolen-base record of 63; as a result, he was named the 1944 Southern Association’s Most Valuable Player.

During his career, Gray played for teams including the Trois-Rivières Renards of the Canadian–American League, the Memphis Chicks of the Southern Association and the Brooklyn Bushwicks.

When Peter joined semi-professional ball he changed his name, to Pete Gray. He did this to avoid ethnic prejudices from other players, coaches, fans, and front offices at the time. In 1942 he signed with the minor league team called the Three Rivers Club of the Canadian–American League. At his first game the crowd poured out to see him. His chance to shine came in the bottom of the ninth. There were already two outs and the bases were loaded. As he approached the plate the crowd went crazy. He hit a line drive to the right field, which drove in both the tying and winning runs. The fans were so happy and excited that they threw money onto the field, roughly about $700 total. While with the team that season he hit .381, but also broke his collarbone and tore ligament which allowed only 42 games that he was able to play. His success and ability to draw a crowd helped get the Memphis Chicks, another minor league team, to notice him and then signed him. While climbing the ladder of the minors, sportswriters nicknamed him the “One-Armed Wonder.” Pete had about 6 successful seasons in the minors before joining the majors for one season, and then returned to the minors for about another 4 seasons as a journeyman. In 1944, while still with the Chicks, he batted .333 and had a league leading 68 stolen bases. That same year he was awarded the Most Valuable Player of the Southern Association and that year the Philadelphia Sports Writers recognized Pete Gray as the “Most Courageous Athlete.” Pete quickly responded with, “Boys, I can’t fight, and so there is no courage about me. Courage belongs on the battlefield, not on the baseball diamond.”

The St. Louis Browns of the American League purchased his contract in 1945 from the Chicks for $20,000, and Pete signed for $4,000. Wearing uniform number 14, Gray played left and center field for the Browns. He appeared in 77 games, batting .218 with a .958 fielding percentage in center field. He played competently in the outfield, transferring the ball from glove to hand with remarkable speed.

He collected his first major league hit (a single) against the Detroit Tigers on April 17, 1945. On May 19, he fulfilled his lifelong dream and played a doubleheader in Yankee Stadium, collecting five hits and two RBI as the Browns swept the Yankees. The first game ended 10-1 and the second ended 5-1. Gray also proved himself an accomplished bunter. In order to bunt, he planted the knob of the bat against his side, and then slid his hand about one-third of the way up the shaft of the bat.

As the season progressed, it became apparent that Gray could not hit breaking pitches. Once he started his swing, he could not change his timing because he had no second hand to check the swing. Opposing pitchers discovered that fact and threw curve balls. His last big league appearance was on September 30, 1945.

Pete would say in 1945, “I’ve been turned down by more big-league managers than any other man in history. I’ve spent more money trying to get into baseball than I’ve earned on the game.”.

His relationship with his teammates was not great, and many were disgruntled because they were in the race to repeat as American League champions and they felt Pete slowed down their success. They also felt, and knew, he was really only there for ticket sells and to boost fan attendance. The previous year they had won the pennant but only had about 508,644 fans attend Sportsman’s Park all season. Infielder Don Gutteridge later said in 1994, “Some of the guys thought Pete was being used to draw fans late in the season when the club was still in the pennant race and he wasn’t hitting well.” These complaints do not hold up under statistical scrutiny which show that the team had a win percentage of .600 when he was on the field, and only .425 when he sat on the bench. That season they finished third and the next season without Gray they fell to seventh. That year with Gray would be the Browns’ last winning season before moving to Baltimore in 1954. Pete later said of his teammates, “If they insulted me, I didn’t pay attention. I mostly kept to myself. That’s why I got the reputation of being tough to get along with. But, I’ve mellowed.”

While playing the field, Pete Gray wore a glove without padding. When the ball was hit in his direction he would place the glove directly in front of himself; roughly about shoulder height. When the ball hit the glove he would roll the ball across his chest from left to right. During this motion he learned to rest the glove under his right stump and the ball would roll into his left hand.

When ground balls were hit his way he would let it bounce off his glove at knee height and drop the glove completely to grab the ball while it was still in the air. He was faster in these motions and techniques than some players who had the use of both hands. When backup for another outfielder during a play, he would drop the glove completely and was ready to take the ball with his bare hand.

While at bat he used a full weight bat. His position and stance at the plate were just like any other player. He placed his hand about six inches up on the handle. In order to bunt, he planted the knob of the bat against his side and then slid his hand about one-third of the way up the shaft of the bat. He was described by sportswriters and players as a pure pull hitter.

Gray’s on-field exploits set an inspirational example for disabled servicemen returning from World War II, as was portrayed in newsreels of the period. He visited army hospitals and rehabilitation centers, speaking with amputees and reassuring them that they too could lead a productive life.

Gray’s major league career ended that same year when many of baseball’s stars returned from the battlefront and assumed their previous positions on the diamond. From 1946 to 1949, he played on as a journeyman minor leaguer with the Toledo Mud Hens, Elmira Pioneers and Dallas Stars. Gray returned home to Nanticoke where, although a local hero/celebrity, he struggled with gambling and alcohol, and lived in near poverty.

He also played in barnstorming games with exhibition teams up until the early 1950s. Having only accomplished one year in the majors, he spent the rest of his life wondering if he was ever really good enough to have been there or if he was just an entertainment attraction for the owners to make money. This personal struggle was one of the possible reasons for his struggle with gambling and alcohol after he left baseball. Before his death, however, he regained a sense of integrity about his accomplishments with the success of both the TV movie and the biography about his life.

He died on June 30, 2002, at the age of 87. He was buried at St. Mary Cemetery in Wilkes-Barre, Pennsylvania. He may not have been a hall of Famer, but his story is one of the most remarkable stories in baseball history, 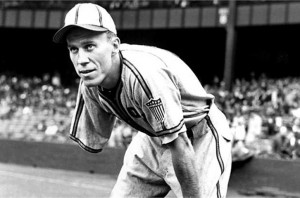 The 20 Greatest Athletes of All Time

20) Althea Gibson One of the greatest female tennis players of all ...

Does it get any better than this if you’re a baseball fan? ...