Oxford: After dropping game one 6-4 the Rebels battled back to win Friday night 5-4 before sealing the deal on Saturday 11-10 in front of a capacity crowd at Swayze Field in Oxford. Cole Zabowski homerun in the bottom half of the 5th inning was the spark Ole Miss was looking to gain momentum to close out the series. James McArthur was lights out on the mound striking out a mere 2 batters in 6 innings pitched. Kacey Murphy for the Razorbacks went 4 innings giving up five hits and four runs.

After a monster 5th inning for the Rebels with four huge runs scored the Rebels never looked back and kept the Razorbacks from coming back in the game. The Rebels also dominated on the mound with James McArthur leading the charge with 6 innings pitched, 3 strikeouts, only giving up three runs to help the Rebels improve to 25-4, and 6-3 in conference play.

Arkansas falls to 19-9 on the season and 5-6 in SEC play. The Razorbacks will return back home this week after having played thirteen straight games on the road. The Razorbacks will play host to Louisana Monroe on Tuesday and Wednesday before the Auburn Tigers come to town on Friday the 6th to play a pivotal three-game series in Fayetteville.

Ole Miss will improve to 25-5 overall and 6-3 in SEC play with this huge series win over Arkansas. The Rebels will hit the road the next two weeks starting with a game against rival Memphis at Autozone Park on Tuesday night, before traveling to arch-rival Mississippi State on Friday for a three skid with the struggling Bulldogs. Ole Miss will then close out the road swing with a game at Southern Miss on Tuesday, April 10th and to close out the road trip a three-game series in Nashville with Vanderbilt. The next home game for the Rebels will be Wednesday, April 18th as the Rebels will host Arkansas State at Swayze Field. 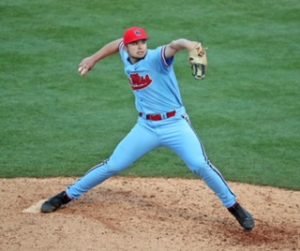 Previous article
« Jets Factor Podcast: Will the Media Hate for the Jets Ever Stop?
Next article
Inside Boxing Weekly Live: Joshua-Parker Recap, Is Joshua Afraid of Wilder? »