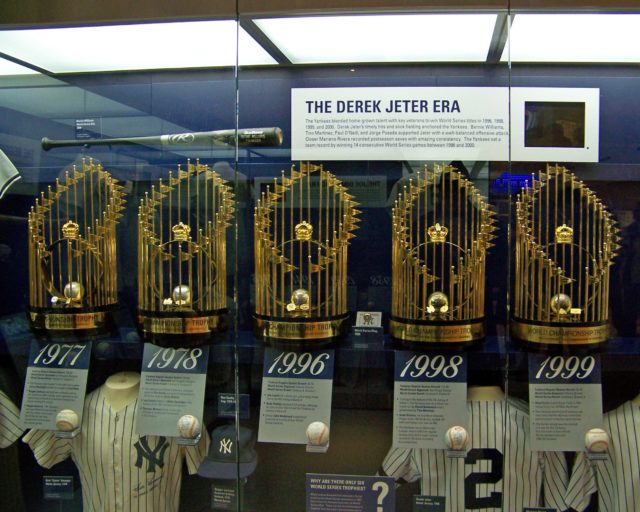 The NBA playoffs ended this past Monday with a Golden State Warriors victory, and with everybody from the Las Vegas super books to NBA analysts expecting the same result for the next several seasons, it begs the question: will Major League Baseball ever have another dynastic team?

When we think about a dynasty, what teams come to mind? The New York Yankees of the 1950s (granted, you could argue from 1920 to the mid-60s), The Big Red Machine and Oakland Athletics of the 1970s, maybe even the New York Yankees of the late 1990s. Yet, since the dominant decade-long run of the Yankees, in the last twenty years what team has stood out like that? Sure, the Atlanta Braves won fourteen straight division titles from 1991 to 2005 (not counting the strike-shortened 1994 season), but only brought one World Series title back to Atlanta. Even as a lifelong Braves fan, I can’t look at that team as a dynasty. It was always an expectation between my Dad and I that somehow the Braves would find a way to ruin their October and prove that division dominance does not dictate postseason dominance.

As we moved into a new millennium, two other teams opened the door for the dynasty discussion: the Boston Red Sox and San Francisco Giants. Out of the seventeen Fall Classics that have been played since 2000, these two teams have secured six of them equally splitting the wealth. While the Boston Red Sox’s historic comeback in the 2004 American League Championship Series led them to their first world title in eighty-six years, and a second in 2007, it took another six years for the third title in 2013. Two titles in four seasons may have had the Red Sox faithful yelling from the Green Monster a dynasty was born, but three titles in ten seasons and only two division crowns put the dynasty talk to bed. The San Francisco Giants, on the other hand, present a different argument and while you may expect this to be the portion of the article where Chris chimes in, you’re only getting me for this one. The Giants appeared, seemingly out of nowhere, in 2010 defeating the Texas Rangers in the World Series. They then swept the Detroit Tigers in 2012 and won an epic seven-game series against Kansas City in 2014, becoming the 1st team since the Cardinals back in the 1940s to win three World Series titles in a five-year span. A team that was built largely from within and made the necessary moves to acquire pieces such as Brandon Belt and Hunter Pence, the Giants were able to keep a core intact with the bulk of starters winning at least two rings throughout that span. As you have heard on the show multiple times, that window seems to have shut and while no dynasty lasts forever, fans of the Giants can enjoy the fact that they did have a dynasty in the City by the Bay.

So that means that dynasties can still exist in baseball, right? Sure, you can’t just close the door on the possibility that a team may have all the right pieces fall into place for a small span of time and leave a large fingerprint on the fabric of baseball, however, the construct of Major League Baseball allows for more parity than any other sport. The longest regular season of any of the four major sports, the 162-game grind that players endure is bound to cause trips, sometimes multiple trips, to the Disabled List over the course of time between February and September, and a slump at the wrong time can turn the tide of an entire season. Every season we in the media give our picks on who will be worst, who will be first, and who floats in the middle. Even after Chris and I broke down all thirty teams over the course of the off-season and gave our early picks on division champs, we are barely hitting .500 on those selections. Sure, nothing is for sure in the sports world, but while the NFL and NBA have felt like foregone conclusions for much of the past decade or more, baseball keeps the drama alive for so many teams until the last day of the season. Players good today may be in the minor leagues next month if they hit a slump and cannot recover. The dynasty is dead in baseball but do not mourn its loss, for the death of the dynasty brings new life to the game and an eagerness to see the elation and heartbreak that teams may feel, and the roller coaster of emotion the game provides to all thirty ball clubs and fan bases.

The Inspiring Life and Tragic Death of Lyman Bostock