The 2003 Florida Marlins made a move that very rarely works in the middle of a season. They fired their manager (Jeff Torborg) and replaced him with 72-year-old Jack McKeon which was a refreshing change of pace for the players. They were 16-22 at the time of the change and still took a while to adjust to the new manager, but they clearly started feeling comfortable. While Torborg brought a micromanaging approach, McKeon adopted a more laid-back, hands-off approach. Check out the best bookmakers for betting on baseball!

The team already had the talent to start the season, with Josh Beckett as their ace, as well as Ivan Rodriguez, Derek Lee, Mike Lowell and Luis Castillo. They eventually called up Miguel Cabrera and acquired Ugueth Urbina from the Texas Rangers. Still, the Marlins couldn’t catch the dominant Atlanta Braves for the NL East, but they remained in wildcard contention and outlasted the Astros, Cardinals, Phillies and Dodgers for the last playoff spot.

No one gave the Marlins much of a chance in their NLDS series with the defending National League champions, the San Francisco Giants. After dropping the opener 2-0, the Marlins came back with three straight wins, winning the series in four to meet the Chicago Cubs who had just upset the Atlanta Braves.

Then came the memorable series with the Cubs. The Marlins fell behind in the series 3 games to one and the cinderella run looked to be done. Until Josh Beckett stepped up to shut the Cubs out in game 5 forcing the series back to Chicago.  Game 6 saw the Marlins overcome a 3-0 deficit, and is also known as the Bartman game. The Marlins took game 7 and it was on to New York.

The Marlins were the underdog as always, and yet again behind the masterful pitching of Josh Beckett would down the Yankees in 6 games. Has any team ever had a better month of baseball than the Colorado Rockies did in September of 2007?

The Rockies were all but out of it,  yet their month of September ended with a run of 13 wins in their final 14 games. That forced a one-game playoff with the San Diego Padres to determine the National League’s wildcard team.The Rockies didn’t shy away from any drama. Deadlocked at six after nine innings, the two teams went to extras. The Padres seemed set to end the Rockies’ miracle run, going ahead 8-6 in the 13th inning. Colorado was dubbed a team of destiny for a reason; Matt Holliday’s triple tied the game at eight and put the winning run on third. Jamey Carroll hit a fly ball to left field, setting up the sac-fly. There is still debate as to whether Holliday actually touched home plate.

The Rockies continued their tear through the playoffs, sweeping the Philadelphia Phillies and then their division rivals the Arizona Diamondbacks. They looked unstoppable, but they ran into the brick wall that was the Boston Red Sox, and their run ended quickly. They were swept in the World Series. Still, this run was the highest point in the franchise’s history. 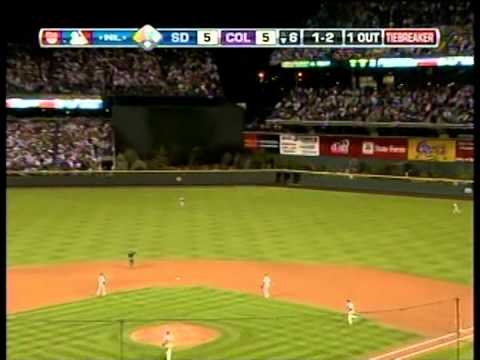 The Cardinals were 10.5 games behind the wild card leading Braves on August 24. On the final night of the season, they needed a win and an Atlanta loss to send them to the postseason. They did their part with an 8-0 win over Houston. The Braves then squandered their hopes, losing to Philadelphia in 13 innings. This marked both a huge comeback and collapse. While St. Louis went 23-9 to close the season, the Braves went 9-18, opening the door for the Cards to steal the NL’s final playoff spot.

St. Louis’s improbable run continued, as they took out the Phillies in five games, capped with a 1-0 shutout in the deciding game. The slugging Milwaukee Brewers were up next, but the Cardinals got by them in six games to reach the World Series.

The Texas Rangers would be the Cardinals opponent, the Rangers had lost the World Series the year before to the Giants and came into the series as the favorite. The first 5 games of the series were tough for both teams, but the Rangers led the series going into what would be a very dramatic game 6.

Game 6 saw the Rangers take a 7-4 lead and were six outs away from their first world series title. The Cardinals got one back in the eighth, but were still in tough against closer Neftali Feliz. Albert Pujols, in what would be his final stretch with the Cardinals, started the rally, hitting a double. The Cardinals added a man on but were forced to their last out.

Down 1-2 in the count and down to the team’s last strike, David Freese knocked one deep in right past Nelson Cruz to bring in the two runners.

Josh Hamilton, angry his team had blown an opportunity, blasted a two-run shot in the 10th to again put St. Louis behind the eight-ball. The Cardinals again rallied, again going down to one final strike. Lance Berkman brought in the tying run.

In the 11th, with the score tied at nine, David Freese hit a solo blast to centre to force a game 7. The Cardinals would close out game 7 with a anticlimactic 6-2 win to send manage Tony Larussa off into the sunset a champion. 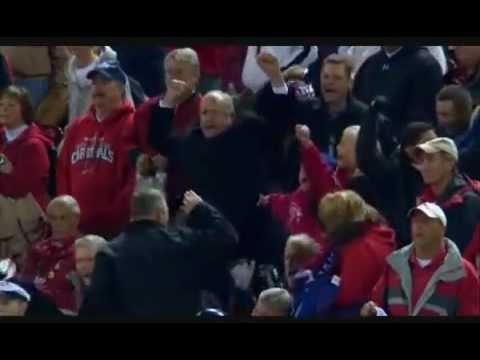 The Yankees were coming off a 1977 World Series title and manager Billy Martin was sure they could go back to back. 1978 got off to a slow start and Yankees owner George Steinbrenner would fire Martin around mid season and replace him with Bob Lemon.

Under Lemon, the rejuvenated Yankees finished in a 48-20 flourish that included their first four-game sweep at Fenway Park since 1949 that was so thorough it was dubbed the Boston Massacre. The Yankees had two, spectacular pitchers in Cy Young-to-be recipient Ron Guidry and Ed Figueroa. They also got a big boost from Catfish Hunter, who disproved reports of his early demise to win 10 of his last 13 decisions.

In July, the Yankees were 14 1⁄2 games behind the Boston Red Sox, but rallied in the second half of the season to finish tied for first place. The Yankees were victorious over the Red Sox in the one-game playoff for the AL East title. This game featured Bucky Dent’s famous 3-run go-ahead home run in the 7th inning.

The Yankees went on from there to beat the Los Angeles Dodgers for the second straight year in the World Series in 6 games.

In their first ten seasons, the Mets never had a winning record and never finished higher than ninth in the 10-team National League. In fact, in their inaugural 1962 season, they were 40-120.

They were 9.5 games behind the Chicago Cubs midway through August, but would win 14 of 17 to close out August and 24 of 32 through September and October, finishing eight games above Chicago. That’s a 17-game differential in under two months of baseball.

Their playoff run didn’t need much drama. They swept the Atlanta Braves and Hank Aaron in three games to reach the World Series against the high-powered Baltimore Orioles, whom many assumed would end the Mets’ dream season.

The Miracle Mets earned their name, stunning the Orioles. The Mets allowed just nine runs in five games. After splitting the first two games, the Mets put the hammer down and shocked the world.