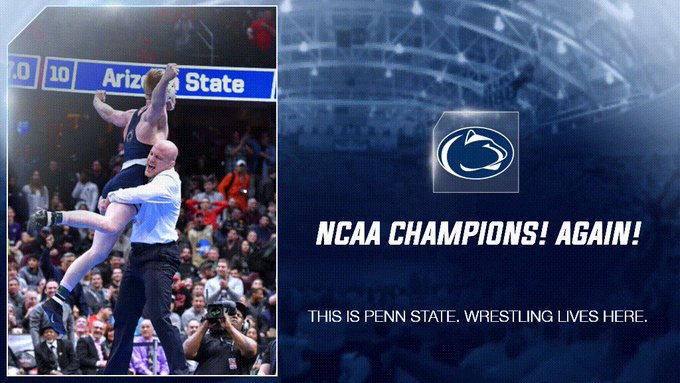 This last weekend Wrestling held their National Championships and Penn State continued their streak of dominance with a win over their BIG 10 rival Ohio State. Winning 141.5 to 137.5 it was their 7th National Championship in eight years. (For a better understanding of how wrestling is scored click here.)

In Penn States National Championship last year, they won 5 individual titles. All five of the 2017 Champions returned to the finals for the 2018 season. They went 4-1 in 2018.

The 165 match up pitted old rivals against each other. #3 seeded Vincenzo Joseph of Penn State wrestled Illinois’ Isaiah Martinez the #1 seed. Martinez and Joseph wrested in the 2017 NCAA championships and Joseph bested Martinez. But Martinez won just weeks ago in the BIG 10 Title. But Joseph stays perfect against him in their National Championship bouts after winning this weekend.

The only Penn State wrestler not to repeat his individual title from last year was Mark Hall in the 174-weight class. The 2018 championship bout repeated the 2017 match with the inverse results. Arizona State’s Zahid Valencia was the only one to exact revenge against a returning 2017 Penn State champion.

In other individual title stories, in the Heavy Weight class the Gold Medalist from the Rio Games Kyle Snyder was matched against Adam Coon’s of Michigan. Snyder, of Ohio State, lost to Coon in their duel meet during the season. Snyder won at the BIG 10 Conference match-up a matter of weeks ago. With the NCAA Championship they entered the Championship Match 1-1. Coons out weighs Snyder by about 55 lbs. Snyder moved the 2018 record to 2-1 with his 3-2 decision.

In the 125-weight class, a Freshman from Iowa won the National Championship. Spencer Lee was 22-2 on the season and came into the NCAA Tournament as the 3 seed. Another big win came in the 133-weight class, where Seth Gross defeated Michigan’s Stevan Micic to earn South Dakota State’s first ever national championship in D1 athletics.

The power and prestige in wrestling still rests in the center of the country. The BIG 10 still produces the premier wrestlers in the country. At the half way point, this is where the future United States Olympians are preparing for 2020.

For a more thorough look at how the NCAA wrestling tournament is scored check out this sight here. For complete results click here. Below is the bout that won Penn State the National Title.