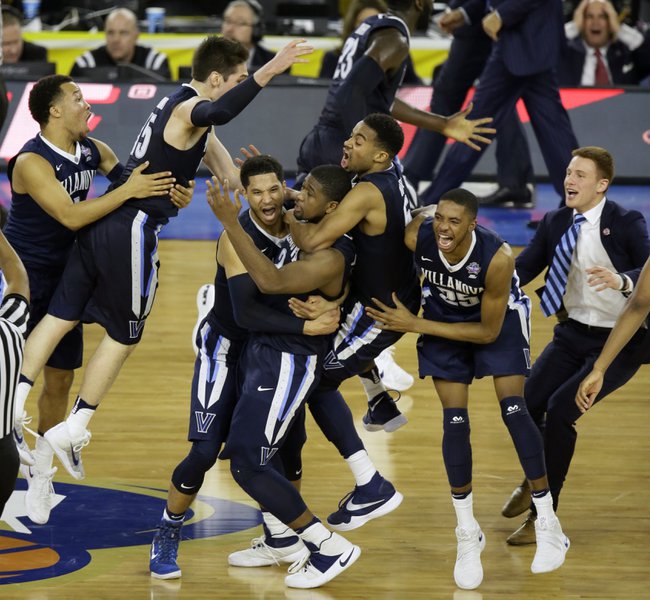 10). 1993 North Carolina over Michigan- North Carolina, coached by Dean Smith, won the national title with a 77–71 victory in the final game over Michigan, coached by Steve Fisher. Donald Williams of North Carolina was named the tournament’s Most Outstanding Player. The most memorable play in the championship game came in the last seconds as Michigan’s Chris Webber tried to call a timeout with his team down by 2 points when double-teamed by North Carolina. Michigan had already used all of its timeouts, so Webber’s gaffe resulted in a technical foul. Without the Weber mistake this game goes down to the last second and with the level of play in this game it would have finished no doubt in the top 5 all-time.

Loading...
9). 1957 North Carolina over Kansas- North Carolina, coached by Frank McGuire, won the national title with a 54-53 triple-overtime victory in the final game over Kansas, coached by Dick Harp. Wilt Chamberlain of Kansas was named the tournament’s Most Outstanding Player. When watching the film of this game today basketball looks darn near like a different sport, but through the first 40 years of tournament games it was considered the greatest game, so with triple over time supporting it and throw in the legendary Wilt Chamberlain, this game cracks the top 10.

8). 1989 Michigan over Seton Hall- Michigan, coached by Steve Fisher, won the national title with an 80–79 overtime victory in the final game over Seton Hall, coached by P.J. Carlesimo. Glen Rice of Michigan set an NCAA tournament record by scoring 184 points in six games and was named the tournament’s Most Outstanding Player.

Just prior to the start of this tournament, Michigan coach Bill Frieder had announced that he would accept the head coaching position at Arizona State University at the end of the season. Michigan athletic director Bo Schembechler promptly fired Frieder and appointed top assistant Fisher as interim coach, stating famously, that “a Michigan man is going to coach a Michigan team.” This game is highly overlooked by people that rate championship game, the pace of the game was very high and the level of play was even higher.

7). 1988 Kansas over Oklahoma- In another very underrated game Kansas, coached by Larry Brown, won the national title with an 83–79 victory in the final game over Big Eight Conference rival Oklahoma, coached by Billy Tubbs.  This was the last national championship game to feature two schools from the same conference. Danny Manning of Kansas was named the tournament’s Most Outstanding Player. Even though the Final Four was contested only 40 miles from its campus in Lawrence, Kansas, Kansas was considered a long shot against the top rated Sooners because Oklahoma had previously easily defeated the Jayhawks twice that season — at home in Norman, Oklahoma and on the road in Kansas’ Allen Fieldhouse. Kansas’s upset was the third biggest point-spread upset in Championship Game history. After this upset, the 1988 Kansas team was remembered as “Danny and the Miracles.”

6). 2008 Kansas over Memphis-  ,Memphis and Kansas advanced to the national championship game, with Memphis’s victory in the semifinals giving them a record-setting 38 for the season, beating the mark set by Duke in 1999 (Kentucky later matched this record in 2012 and 2015). Kansas, however, spoiled their national championship hopes by handing the Tigers their second loss of the season, winning the game in overtime, 75-68. Memphis’s entire season was later vacated by the NCAA due to eligibility concerns surrounding freshman guard Derrick Rose.

5). 1982 North Carolina over Georgetown- North Carolina, coached by Dean Smith, won the national title with a 63-62 victory in the final game over Georgetown, coached by John Thompson. James Worthy of North Carolina was named the tournament’s Most Outstanding Player. This is the game were the world was introduced to a freshman guard named Michael Jordan, Jordan hit what would end up being the game winning shot. What people forget is that Georgetown ended up with one more possession, in the closing seconds Fred Brown of Georgetown made one of the biggest mistakes in championship game history when he mistakenly throw a pass to James Worthy to seal the game for North Carolina.

4). 1987 Indiana over Syracuse- Indiana, coached by Bob Knight, won the national title with a 74-73 victory in the final game over Syracuse, coached by Jim Boeheim. Keith Smart of Indiana, who hit the game-winner in the final seconds, was named the tournament’s Most Outstanding Player. This was an outstanding back and forth battle between two teams that came down to the buzzer. The biggest difference in this game came down to the free throw line, which played into the hands of Indiana a great free throw shooting team.

3). 1983 North Carolina State over Houston-  North Carolina State, coached by Jim Valvano, won the national title with a 54–52 victory in the final game over Houston, coached by Guy Lewis. The ending of the final is one of the most famous in college basketball history, with a buzzer-beating dunk by Lorenzo Charles, off an air ball from 30 feet out by Dereck Whittenburg.

Both Charles’s dunk and Valvano’s running around the court in celebration immediately after the game have been staples of NCAA tournament coverage ever since. North Carolina State’s victory has often been considered one of the greatest upsets in college basketball history, and is the fourth biggest point-spread upset in Championship Game history.

2). 1985 Villanova over Georgetown- In my opinion, the greatest upset in a championship game was when eighth-seed Villanova, coached by Rollie Massimino, won their first national title with a 66–64 victory in the final game over Georgetown, coached by John Thompson. Ed Pinckney of Villanova was named the tournament’s Most Outstanding Player. The game is often cited among the greatest upsets in college basketball history, and is the second biggest point-spread upset in Championship Game history. This Villanova team remains the lowest-seeded team to win the tournament. The game is also notable as the last played without a shot clock. Villanova seemed like every shot they took went in and they still only won by two points, sub Harold Jensen came off the bench and did everything right.

Loading...
1). Villanova over North Carolina- Kris Jenkins’ three-pointer at the buzzer lifted the Wildcats in the most thrilling championship games in tournament history. The game had everything and this was the first game since the 83 championship to be won 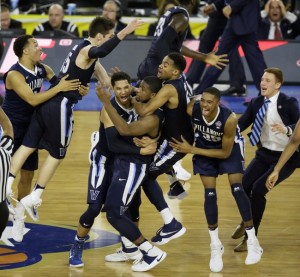 on a buzzer beater.The winning basket came after an almost-as-spectacular three-pointer from the Tar Heels’ Marcus Paige, who double-pumped, then fired, tying the game at 74 with 4.7 seconds left. A lot of times I think people overreact right after a great game, this is one time I agree with them, in my opinion the 2016 NCAA championship game is the greatest in history!

The 9 Greatest Monday Night Football Games of All Time

State Of The League: Philadelphia Eagles

This is the End: When Legends Die Hard

If you enjoy hearing from the legends of pro sports, then be sure to tune into “The Grueling Truth” sports shows, "Where the legends speak"
Contact us: thegruelingtruth@gmail.com

Top 10 Chicago Bulls of All Time!