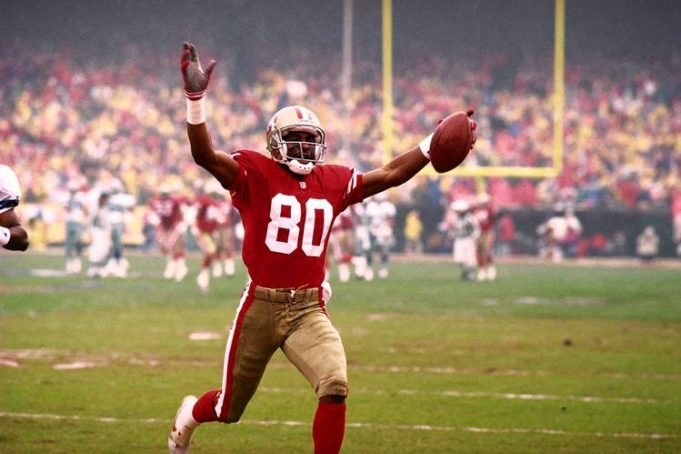 Moore is often forgotten about because of the shortness of his career. But in Moore’s case, no one was better from 1994-1997. In that span, he set the NFL record for receptions with 123 (since broken).

Swann was arguably the most graceful football player ever and made some seriously acrobatic catches (especially in big games.) Numbers don’t stack up to a lot of guys on the list, but then again he was remarkable in Super Bowl 10.

Pearson wasn’t the greatest touchdown scorer, but he was able to stretch defense vertically in a way that was invaluable for Tom Landry.

Known as “Mr. Clutch”, his famous reception of the “Hail Mary” pass from Staubach in the waning moments of a playoff game against the Vikings in 1975 (where Pearson caught a game-winning touchdown catch), like Swann he was great in big situations and his numbers were better than Swann’s.

He helped to forge the Cowboys’ winning tradition in the mid to late 1960s. Hayes scored double-digit touchdowns in five of his first six NFL seasons.

Sharpe’s career was unfortunately cut short by injury. In his time, though, few receivers achieved anything close to his production, including his final year in the league, where he had 18 touchdowns.

Reed was one of the most elusive underneath receivers in league history. As a member of the Bills’ “K-Gun Offense”, where they ran almost exclusively no-huddle, Reed compiled great numbers over his entire career.

He never played for a championship team, yet his body of work is very, very good. He developed into an elite receiver with the Rams and then enjoyed a resurgence with Washington during the mid-’90s. Not a go-to receiver, but one of the best deep threats of his era.

He was consistent and became a fixture in a Redskin team that won three Super Bowls during his tenure. If anything, his numbers were hurt by success, because the offense he played in had so many good players that they leaned on him less.

He had a longer and more productive career than Swann and was no less clutch when the pressure was on. If you don’t believe me check out Super Bowl’s 13 and 14.

Even in the modern era, where we can equate a receiver’s numbers fairly easily, Hines Ward ranks higher on this list than his pure numbers probably should. Ward’s overall toughness and general makeup put him in this position.

If you needed a huge catch on a fourth down and there was a guarantee that the receiver would get leveled by the defense but would have to hang on anyway, then I’d want Hines Ward for that exact situation.

Branch scorched NFL defenses for a decade. One of the only men who could rattle Steelers Hall of Famer Mel Blount (though it was an even battle to be sure). Branch was a nightmare matchup for any defensive back.

Not only was he part of a trend-setting Air Coryell attack, but his longevity as a player was a sign of things to come. He was more than just a good athlete; he was intelligent. Right up through his 17th year in the league, Joiner was hauling in almost 1,000 yards a year.

A forgotten GREAT receiver, who could blow by a DB as quick as anyone that ever played the game. As smooth as any receiver to ever play the game.

I think the best way to explain Warfield is the fact that he’s one of the only men in NFL history to average 20 yards a catch for his career. Yes, that’s right, every time he touched the ball, he was going the length of two first downs on average. As a member of the early 70’s Dolphins dynasty, he also has perfection on his resume, plus back to back Super Bowl titles.

No one would ever have accused him of having elite speed, but Biletnikoff was very clever, popping up between defensive backs to make clutch catches for the Raiders. One of the greatest route runners in NFL history.

He had unbelievable consistency, recording 1,000-plus yards and at least 80 receptions for eight straight seasons.

Both guys were consistently great for a long period of time.

He had great speed, great hands and great knowledge of the game, making big plays when called upon. Most notably, his 73-yard touchdown catch in the dying moments of Super Bowl XXXIV gave the Rams the lead in their sole Super Bowl win. Bruce had one of the best years a receiver has ever had in 1995 (only his second season), when he tallied 117 receptions for 1,781 yards and 13 touchdowns.

Berry was a relentless competitor and tireless worker who was a perfect complement to Johnny Unitas, delivering a Championship record 12 catches for 178 yards and a touchdown in the 1958 NFL Championship, which the Colts won in overtime over the Giants.

Alworth was an AFL Western Division All-Star in seven consecutive seasons, from 1963 through 1969, and was an AFL All-League flanker the same seven seasons.

Irvin has numbers that aren’t overly great compared to his contemporaries. And, he also played against defense that were consistently scared to death of the Cowboys running game (giving him a match-up advantage.)

Still, Irvin had the swagger that the Cowboys needed to be great. He simply willed them to play well in big games during their height in the early 1990’s.

Carter was truly a touchdown machine and the amazing fact is that he had consecutive seasons with 122 receptions in 1994 and 1995.

Harrison made it look easy, popping up to catch 10-15 yard passes like he was sleepwalking and then sit down to avoid being hit (a smart decision). Very intelligent player and great route runner, but also explosive.

He had great route-running skills and exceptional hands. Maynard came to symbolize the AFL’s desire to prove they were just as good as the NFL, since he had been cut by the NFL Giants early in his career. During the Jet’s famous Super Bowl season, he had 1,297 yards (22.8 yards per catch) and 10 touchdowns. Pretty solid, no matter the generation.

Owens was the play-making, abrasive superstar who relished the limelight (as well as contact with defensive backs).

The funny thing is his numbers are comparable to too. Yet when you remember that Owens has an extra two seasons in the league, then Moss starts to look slightly better.

Also, Moss in his prime was probably the single greatest deep threat in NFL history. He had unmatched speed, a hulking 6’4″ frame, and the strength to break from any coverage.

Johnson’s career was shortened by being a Detroit Lion, if he goes somewhere else and plays his career he may even be ranked higher than this.

You may have never heard of Don Hutson, but make no mistake, he was the best receiver of all time for nearly 50 years. There is no denying that Hutson was far ahead of his time. He led the league in receiving yards seven times, receptions eight times, and touchdown receptions nine times.

His record of career touchdown receptions (99) stood at the top until Steve Largent broke it…in 1989!

Never any question about this number one if you were lucky enough to be alive when he played.