An American Guide to the Rugby World Cup 2019

It’s fair to say that rugby union is not a big sport in America. It is way behind the big four of American football, basketball, baseball, and hockey. Which means that despite the presence of USA Rugby, the Rugby World Cup 2019 will hardly register with many sports fans in the US, despite the headline-making arrival of former England rugby star, Christian Wade, at the Buffalo Bills.

By contrast, confident fans Down Under have been backing the Australia and New Zealand sides heavily with a huge range of antipodean bookmakers as the tournament draws near. Yet rugby union is growing fast in the States and there are now around 125,000 players registered with USA Rugby. So could this be the year that the team makes their breakthrough? Let’s take a quick look at the game and the tournament to bring you up to speed on what could be a thrilling year for American rugby.

A quick guide to rugby union

Rugby union is a fifteen-a-side game played over two halves of 40 minutes each. The pitch measures 100 meters and there is a goal at each end resembling an American Football goal. There is also an area at either end of the pitch, beyond the goal, much like the end-zone.

Similar to American football, the aim of the game is to get the ball across the line and into the opponent’s ‘end-zone’. This is called a try and is worth five points, but the ball must be grounded to score – unlike a touchdown, which doesn’t actually have to be touched down. You can also score two extra points from a kick after a try and three points for a penalty kick through the posts or a ‘drop goal’ which is kicked over on the bounce.

Unlike American football, the ball can’t be passed forward, although it can be kicked forwards at any time. What’s more, if a player is tackled, the game continues, with support players piling in to secure the ball and get it back into play. If the ball goes out of play, then there is a ‘line out’ where the ball is thrown in between two lines of players.

America at the Rugby World Cup 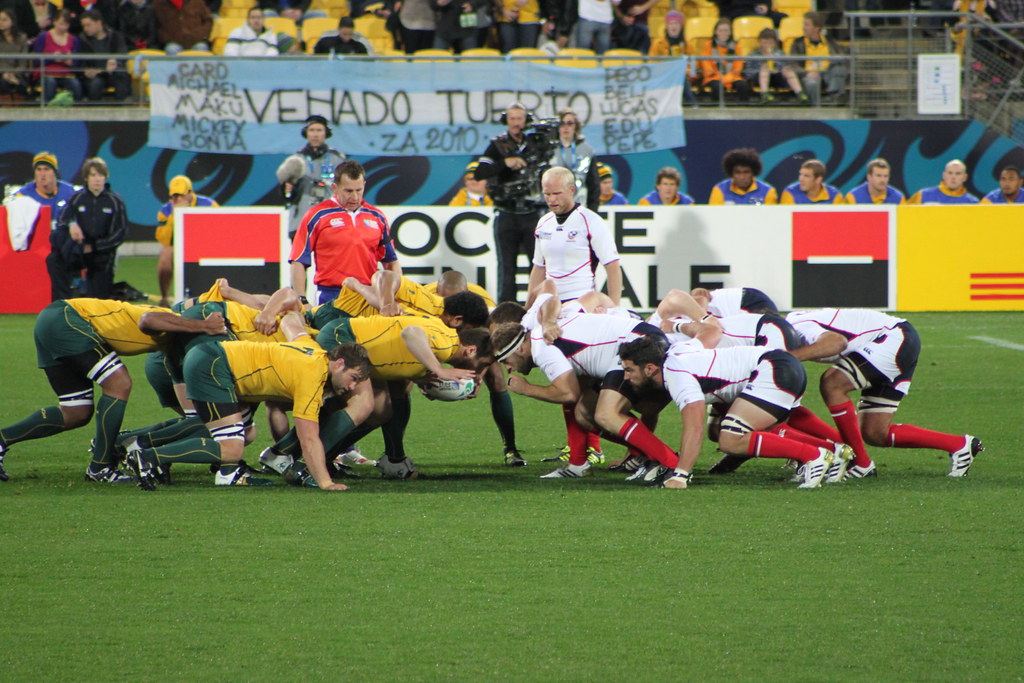 The American team, known as the Eagles, were at the first-ever Rugby World Cup in 1987 and won their first game, beating Japan 21-18 but did not progress beyond the group stage despite scoring tries against both Australia and England. They have since qualified for every tournament except 1995, and in 1999 were the only team to score a try against the ultimate winners, Australia. In 2011, they won their target game against Russia, 13-6, but still did not progress beyond the group stage.

Unfortunately, things do not look promising for 2019 either. The United States has been drawn in perhaps the toughest of the four pools, with England, France, Argentina, and Tonga. They have four matches to play, kicking off against England on Thursday 26th September before playing France on the 2nd October, Argentina on the 9th October and Tonga on the 13th October. Given that this group is already a worry for the major teams, with only two from England, France and Argentina able to go through, the chances for the US seem pretty slim.

While their prospects don’t look great for RWC 2019, The Eagles are certainly not just there to make up the numbers. They can draw inspiration from their host’s performance in the previous tournament, where lowly Japan, significantly smaller both in world rugby stature and physical stature on the pitch, set the 2015 tournament in England and Wales alight with an unexpected win against the mighty South Africa by 34 to 32. Given that the US then gave Japan a good game, only losing 18-28, it would seem that the gulf between the top teams and the rest is closing all the time. An upset against France or Argentina is very possible for the US and a close match against Tonga is guaranteed, so there is all to play for.