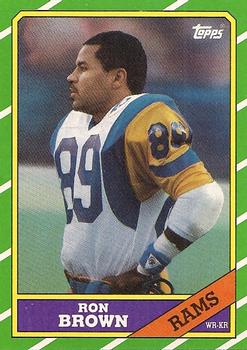 So often this season – so very, very often, as in blowing a two-touchdown lead on the league’s 30th- or 31st-best team with three minutes to play – Los Angeles Rams fans have had to seek solace in the past. The L.A. Rams 2.0 Show can’t do much about the Rams’ present, but we can bring the team’s 1980s heyday back via podcast!

This week, co-hosts Os Davis and former Notre Dame, Buffalo Bills and Los Angeles Rams great Tony Hunter welcome two-sport star/one of the coolest human beings on the planet, Ron Brown. Ron’s storied career grabbed him sports headlines from his high school days in California through to his days as a cornerback with Arizona State University and finally into the NFL as an All-Pro kick returner and wide receiver with the Rams and then-Los Angeles Raiders.

O, and the man was also a member of the gold medal-winning, world record-setting U.S. track and field relay team in the 1984 Olympic Games. Not too shabby.

But while Ron may realize how lucky he was to be one of the few to ever play pro football, to ever compete in the Olympics, he’s hardly a guy to live in the past. Ron tells Os and Tony about the veritable myriad of projects he’s involved in, including in combat veteran support and retired NFL player advocacy groups, and even the Rams’ Inglewood stadium project development.

Naturally, Ron has some thoughts on the current editon of the Los Angeles Rams, including a rather surprising take on taken-for-granted Todd Gurley.

In short, Ron Brown *is* Rams football of the good old days and the Rams 2.0 Show was pleased as proverbial punch to have had him join us.

Check out episode 13 of the L.A. Rams 2.0 Show with hosts Tony Hunter and Os Davis right here, download with Spreaker or Stitcher, and/or subscribe via iTunes.

(Theme music: “Rare Bird” by Tab & Anitek, remixed with sample from HBO’s “Hard Knocks” and a cameo appearance from our president-elect. Used with Attribution Noncommercial-ShareAlike 3.0 License.)

Get your Free Bet now!
Latest News
A case can be made for Joe Gibbs as the Greatest Coach in NFL history
The GOAT Many great coaches have played a ...
Carl Nassib signed by the Tampa Bay Buccaneers
After being released by the Raiders in March ...
Woodward out as the Manager of the Texas Rangers
On Monday, the Texas Rangers fired Chris Woodward ...
Top 5 Hardest Punchers in Light Heavyweight History
Top 5 Today we take a look at ...
Joey Votto talks about Playing At Field Of Dreams
Joey Votto has been one of the most ...
Sports Betting Deposit Methods
Best Sports Odds
Betting Tips
Betting Tip: Cleveland Guardians vs Detroit Tigers
Tip:
Total Hits
Odd:
1.86
Current Bonus:
Bet $1, Get $200