The Jacksonville Jaguars welcomed back their young quarterback Trevor Lawrence, who is looking forward to a great season in his second year with the team. For the first time since June, the Jaguars hit the practice fields Monday morning after reporting to training camp Sunday. Check out the best bookmakers for betting on the NFL.

During the first week of camp, Lawrence’s main goal is to observe how well-organized team activities progressed so far.

“We’re not starting over. We’re picking right back up where we left off from our time in June,” Lawrence said. “Our goal for day one is to continue the knowledge we’ve already instilled, and by next week we’ll be full speed.”

Kole Emplit
2022-11-30 18:39
Trevor Lawrence spoke with the media following day one of training camp. He said he’s grown into a leadership role this off-season going into his second year with the #Jaguars. https://t.co/0GyTjyLx5H 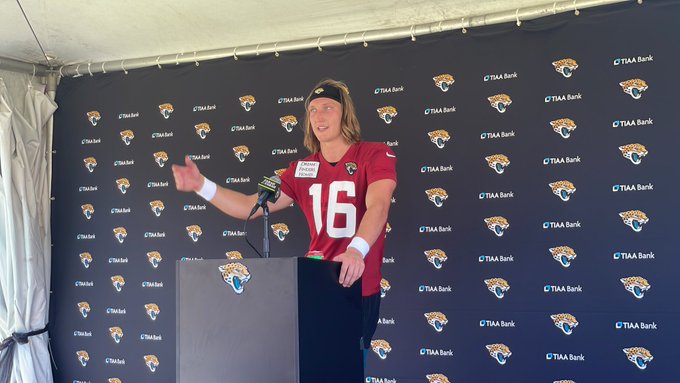 His rookie season was marked by more than 3,600 yards thrown, 12 touchdowns, and 17 interceptions. Although Lawrence’s interceptions number is high, he said he’s determined to improve in year two.

Check out the top sportsbook providers for betting on the NFL

“I have a lot of motivation entering the year. Personally, my goal this year is to prove that I belong here and that I’m the player I believe I am, and that team believes I am,” Lawrence said. “As a team, we have a new slate, and we got a good enough group to win, and we have a lot to prove.”

With Doug Pederson now leading the Jaguars, the team had to learn a different system. Lawrence, however, claimed that Pederson’s coaching style has become very comfortable with the team, as well as the playbook.

“It’s cool to see how he approaches practices, and he’s definitely a player’s coach,” Lawrence said. “He knows what it takes to win championships and has a standard everyone is trying to uphold.”

The 2017 Philadelphia Eagles clinched their first Super Bowl since 1960 NFL Championship under Pederson.

Pro Bowl quarterback Carson Wentz was an MVP candidate before he suffered an ACL injury in the final three games of the regular season and playoffs. His career total before the injury was more than 3,200 yards and 33 touchdown passes. The Eagles won the championship with Nick Foles as its backup.

With the way Pederson sees the play and jumps in, he has always been described as a highly intelligent coach. It is likely to have a significant impact on Lawrence’s game to have him in Jacksonville.

“He’s been in my shoes, and he knows what can help me elevate my game,” Lawrence said. “He totally understands every situation and is always guiding me when needed.”

In Pederson’s view, Lawrence having a full rookie season can only benefit him going forward.

“He’s going to build off his first year, but he’s got a sky’s-the-limit mentality in terms of taking that next step,” Pederson said. “I think he’ll take a big step not only becoming a better player but becoming a better leader for this football team.”

Compared to his rookie season, Lawrence felt much more prepared heading into the offseason.

“I know better how to prepare my body and make sure I’m much more prepared and comfortable going into a new year,” Lawrence said. “Last year, I had no idea how to prepare and, along with surgery, made for an uncomfortable offseason. I feel the best I have in a long time.”

Lawrence is thrilled to be back with the team and is unconcerned about what people might expect from him this year.

“I’m not worried about the talk around me,” Lawrence said. “I don’t plan on having a bad year.”