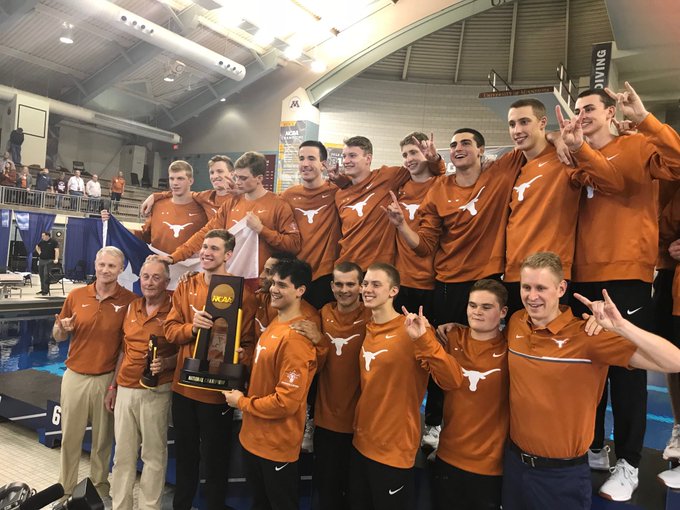 The University of Texas won their 4th straight NCAA title and the teams 14th total. This win was by one of the slimmest margins (11.5 points) and without a single relay victory (their highest placement in a relay was 3rd in the 800 Free Relay).

The individual achievement of the meet goes to the amazing performances by Caleb Dressel of the University of Florida. He won all three of his individual events but wowed the crowed with his results in the 50 and 100-yard freestyle. In the 50 Free he broke all his own records with an amazing 17.63. This is a second faster than the second-place finisher. In an only 50-yard event to win by that much is unheard of at this level. To put that in perspective the difference between 2nd place and 40th was one second.

In the 100 free it was the same story, Caleb Dressel won the event in record time of 39.9 seconds. Second place was 41.09. 2nd place thru seventh place were within .8 seconds of each other. In events that are usually won by fractions of a second Dressel was dominating.

Most NCAA meets are won and lost in the relays, but this Championship was unique. NCAA’s always starts off with the longest relay, the 800-freestyle relay (4×200). North Carolina State won the relay in 6:05.3. Indiana finished second, Texas third with Florida and Georgia rounding out the top 5. The Team results at the end of day would reflected exactly that finish.

The Second Day of competition includes the first individual events of the meet. The 200 Freestyle Relay (2×50) was won by Florida with Dressel leading off in 17.81 seconds. NC State would finish 2nd keeping their team points in the lead.

The first individual event had the first win by the eventual NCAA champion Texas by Junior Townley Hass. Florida’s Jan Switkowski won the 200 Individual Medley. The 50 Freestyle came next and Dressel dominated the field as above stated gaining more first place points for the University of Florida. The 2nd day of competition ended with the 400 Medley Relay (4×100) which Indiana won with NC State finishing second. Florida would finish 5th in the event. Texas finished in 9th, unable to qualify for Finals in the Prelims (For a better understanding of collegiate scoring click here).

Team Rankings after Day 2 had Indiana taking the lead from NC State by 4 points. Texas, with individual performances moved to 3rd, 10 points behind first and 5 points ahead of Florida.

Day 3 opens with the most grueling event of the meet, the 400 Individual Medley. Adam Devine the Junior from Stanford won the event in 3:35.29. It was the first win for the PAC-12 of the meet.

In the 100 Butterfly, Caleb Dressel beat all of his own records with a time of 49.69. Joseph Schooling, the reigning Olympic Gold Medalist in this event, came in 4th for Texas with a time of 44.68. (As a reminder, NCAA’s and all American collegiate swimming is swam in a 25-yard pool. Olympic and International Competition is swam in a 50-meter pool)

In the 200 freestyle again Texas’ Townley Haas got his team a win in record time of 1:29.5. The 100 breastroke was won by Indiana’s Ian Finnerty in record time of 49.69. (In international competition the breastroke events are historically the United States weakest events.) The 100 backstroke, the United States most dominate event internationally, was won by North Carolina States Coleman Stewart. He beat out Texas’ John Shebat by .01 of a second.

The Final event of Day 3 was the 200 Medley Relay which was won by USC in the time of 1:21.82. California finished second with Florida, Indiana and Texas filling in the Top 5.

The Team results going into the last day had Indiana 19 points ahead of Texas. Cal in third. North Carolina State fell to 4th place and Florida was in 5th.

The Final day of NCAA’s begins the Finals with the longest event in swimming, the 1650. Anton Ipsen of North Carolina State tried to relight the path to victory for the Wolfpack with a win.

But in the next event, the 200 backstroke, Texas finished first and second. Shebat who finished second in the 100-backstroke finished second again in the 200. Austin Katz, the freshman for Texas won the event with a time of 1:37.53. Texas finished 5th as well as 14th in that event, earning valuable points against their competition (for a better understanding of scoring click here).

After the backstroke the 100 freestyle was dominated by Caleb Dressell. Texas would place 6th and 7th in the event.

The 200 breastroke was again won by the 100 Champion, Ian Finnerty of Indiana (this means the Indiana swept all the breastroke events in both the women’s and men’s NCAA’s).

The 200 fly was won by Andreas Vazaios from North Carolina State.

The meet ended on the 400 Freestyle Relay (4×100). North Carolina State finished the meet how they started with a win. With a new American Record they swam the last event in 2:44.31. Florida finished second, California in 3rd and Texas in fourth.

The final results were Texas with the Championship with 449 points. California in second with a late charge in the meet. Indiana behind their breastroke dominance and strong medley relay performances finished 3rd. North Carolina State finished 4th. One hundred points behind Texas was Florida in 5th.