The Top-16 New York Giants of All Time

One of the storied-franchises in the history of the league, the New York Giants have many great players. As always, no active players in the all-time Top 15. Eli Manning will be there one day when he retires.

After an injury in his rookie season, Hampton would go on to rush for over 1,000 yards for the next five seasons.

When he retired, he was the Giants’ all-time leading rusher with 6,897 yards. He was a part of the Super Bowl 25 team and also got voted into two Pro Bowls.

After spending time serving our country in World War II, Conerly began playing with the Giants in 1948 where he was named the NFL’s Rookie of the Year. The Giants played in the 1956, 1958, and 1959 NFL Championship Games, winning the 1956 game against the Bears, 47-7. Unfortunately for him, the Giants had to play against Johnny Unitas’ Colts in 1958 and 1959 where the Colts won both games.

He was a three-time All-Pro, won the NFL’s MVP in 1956 and made the Pro Bowl twice. Though he didn’t make the Hall of Fame, he was one of the best Giants to ever play. While Barber may not be popular anymore amongst many Giants fans, he had a great career with New York.

He was a very consistent runner and was the bulk of the offense for a lot of his career. Barber retired as the team’s all-time leader in rushing with 10,449 yards. Bavaro was known for being a great receiver as well as a devastating blocker. He was a key piece to both Giants Super Bowl wins under Bill Parcells. One of the toughest players to ever play the game. 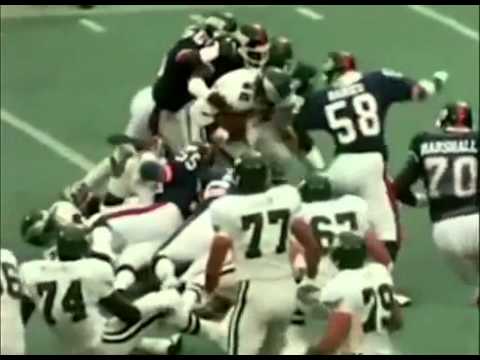 Simms doesn’t make Top 10 All-Time Quarterbacks lists, but he was very good when he played.

He was consistent and always had the Giants contending in the playoffs. In 1986, he posted one of his best seasons with about 3,500 yards and 21 touchdowns as the Giants had a 14-2 record on their way to a win in Super Bowl 21 over the Broncos. In that Super Bowl, Simms completed 22 of his 25 passes for 268 yards and 3 touchdowns. His 88% completion percentage is still a Super Bowl record and he was awarded the game’s MVP.

Toomer began his career as a return specialist, but eased his way into the passing game and became one of the most consistent receivers in the league.

After 13 seasons and five straight 1,000 yard seasons, Toomer became the team’s all-time leading receiver with 9,497 receiving yards on 668 receptions and 54 touchdowns. He also had 1,060 yards and three touchdowns on 109 punts. 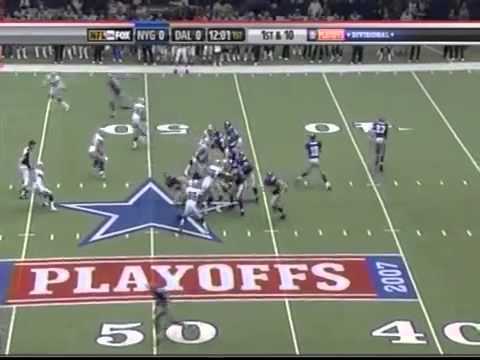 Though he started with the Rams, it was his move to New York that helped him emerge as one of the best.

His leadership was a driving force behind the Giants’ win over the Bears in the 1956 NFL Championship Game as well as for the rest of his career.

He was a seven-time All-Pro and Pro Bowler.

As one of the best defensive ends ever to play the game, Andy Robustelli was rightly inducted into the Hall of Fame in 1971. When it comes to versatile players, Gifford was one of the best. He was a running back, a receiver, could pass, return punts and also was a good defensive back.

He was a four-time All-Pro and an eight-time Pro Bowler but at THREE different positions, defensive back, halfback and wide receiver.

He was the MVP in 1956 and helped the Giants win it all. He retired with a combined 92 touchdowns and was inducted into the Hall of Fame in 1977. 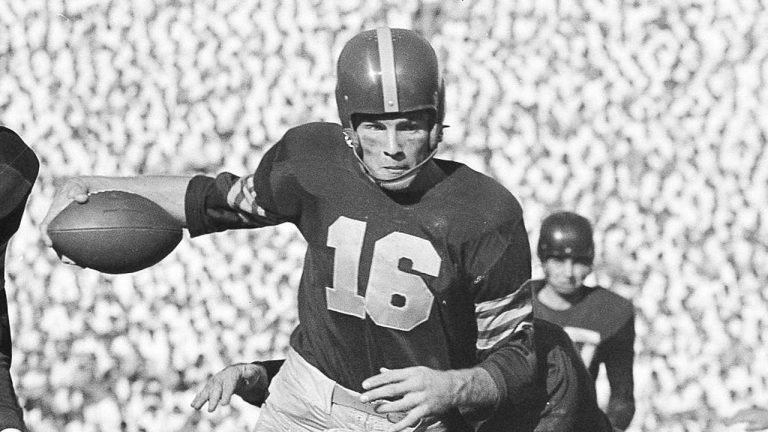 Carl Banks and Lawrence Taylor got most of the press during the 1980’s, but it could be argued that Harry Carson was just as important as he was an influential leader both on and off the field.

As the team’s primary run-stuffer on the inside of the Giants’ 3-4 defense, Carson helped the Giants shut down the run so that they could do what they did best: Rush the passer.

He was selected to the All-Pro Team 7 times, the All-NFC Team 8 times, selected to play in the Pro Bowl 9 times, and was named NFC Linebacker of the Year twice.

Carson was rightfully elected to the Hall of Fame in 2006. 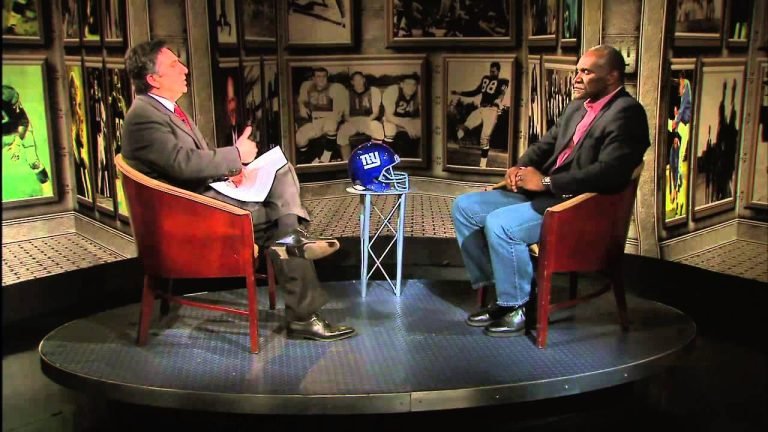 Sam Huff was one of the NFL’s all-time great linebackers during an era of great players on defense like Dick Butkus, Ray Nitschke and Deacon Jones.

Huff was a three-time All-Pro and five time Pro-Bowler and was inducted into the Hall of Fame in 1982.

You have to respect a man whose best games came in the playoffs, Eli gets a lot of crap and it is unjustified! Giants management’s kept Eli from reaching his full potential, get him some lineman that can play! Eli has 2 Super Bowl rings and beats an undefeated Patriots team to get the first one and in the Second one, he beat Tom Brady yet again.

Tunnell was amazing. In 1952, he gained more yards on interceptions and kick returns than the NFL’s lead rusher!

His 79 career interceptions, still just two short of the record, paved the way for his nine Pro Bowls and the nickname “offense on defense”.

He had a major impact on the Giants’ defensive success and his 79 career interceptions were a then-record, justifying his nine Pro Bowl selections and 1967 Hall of Fame enshrinement.

Mel Hein was a very unique player. He was the game’s best center for 15 years and he never missed a game, but also was the team’s starting middle linebacker.

Roosevelt Brown isn’t just the greatest offensive lineman in Giants history, he’s one of the greatest in all of NFL history.

An 8-time All-Pro and 9-time Pro-Bowler, Rosey was very quick and powerful. He was a fantastic pass blocker for Charlie Conerly and Y.A. Tittle and also exceled on running plays, opening up huge holes for Alex Webster and Frank Gifford.

Brown was inducted into the Hall of Fame in 1975. 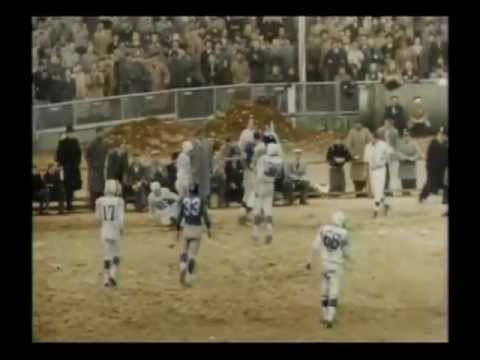 Michael Strahan was one of the best pass rushers in the history of the NFL. He recorded double-digit sacks a total of six times over a span of nine seasons and became the Giants’ all-time leader in sacks. He also holds the single season mark with 22 1/2.

On his final game, he helped the Giants upset the undefeated Patriots in Super Bowl 42.

He was named All-Pro five times, went to the Pro Bowl seven times, and was named the NFL’s Defensive Player of the Year in 2001. Without a doubt, Lawrence Taylor is the best player in Giants history. A two-time Super Bowl champion, 10-time All-Pro, 10-time Pro Bowler, and a 3-time Defensive Player of the Year, Taylor changed the game as he revolutionized the linebacker position.

Taylor is probably the best linebacker and perhaps best all-around defensive player in the history of the NFL. He finished with 132.5 sacks and was elected to the Hall of Fame in 1998. Get your Free Bet now!
Latest News
Qatar 2022 Fifa World Cup Quarter-Finals: Netherlands vs Argentina
We have a world class clash this Friday ...
Long-shot David Avanesyan fights Terence Crawford Dec.10
The odds are long - 14-1. His two ...
Teofimo & Warrington Can’t Afford To Look Past Saturdays Opponents
In the world of boxing, the next big ...
Our Latest YouTube Videos