The 5 Biggest Concerns for the Oakland Raiders

How can the Raiders go from “far from perfect” to “the team to beat”? Address their weaknesses, some obvious and some maybe not.

The upcoming season promises big things for the Oakland Raiders. They’re already in the playoff conversation, several of their players are consistently ranked on top ten lists, and they’ve been called the only hope to end the Patriots’ dynasty. But the team, as good as they look on paper and on the practice field, is still far from perfect. Some major questions remain that could make or break the entire season.

What will Marshawn Lynch really bring to the table?

Nearly everyone was a fan of the Raiders signing a deal with hometown hero Marshawn Lynch, but he’s on the wrong side of 30 and questions arise regularly about how much he actually has left in the tank. Much of the debate was silenced after OTAs and the first week of training camp, but the star running back will still be an x-factor until the first game gets going.

Taking all of that into account, what is the likelihood that Beast Mode can pull out a 1,000 yard season? Is it realistic to think that he’s still the monster that he was before? Let’s take a look.

A NY Times article shared some comments from quarterback Derek Carr, stating “He’s going to run through some people’s faces; I think that’s what he’s going to do. Very physical. That part of the game is fun to him. I tend to like to slide or go over people, and he likes to go through them, so I don’t have to do it.” In the same vein as Derek Carr, Gabe Jackson spoke about how he motivates the team to work harder. Essentially, Lynch is the perfect complement to Carr in the motivation department.

This kind of feedback is very promising, even if it is from his own new quarterback. It may seem biased but the truth of it can’t be denied when you watch tapes of him performing. Whether it’s on the field or in full dress (including combat boots) on a beach, it’s clear that he’s not lost a step without pads on. How did he do when he got into full pads, you may ask. Here’s a quick clip to give you an idea. 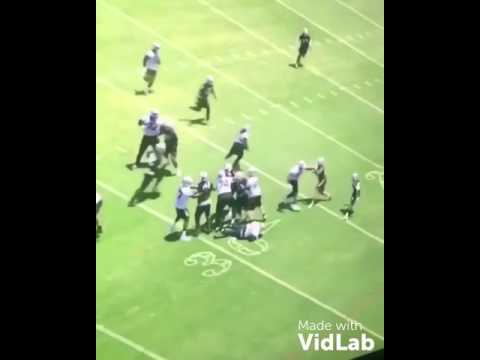 It appears that this shouldn’t be a question for the Raiders going forward. However, it’s always a question until the team is surrounded by the bright lights and big crowd of the coliseum. Once the team sees Lynch come off the bench with a 100+ yard game, all questions will be put to rest.

Who will fill the MLB position? And more importantly, who’s at right tackle?

A “draft” depth chart was released this week and along with the staples that everyone expected, there were some surprises. With Donald Penn still holding out for a bigger contract, huge questions arise at unexpected positions.

Previously, training camp promised just a few major battles at right tackle and middle linebacker, but now 2 of the 5 positions on the all-star O-line are in limbo. It seems that the linebacker position battle is being settled rapidly, along with some other questions on the defensive side of the ball. John Pagano appears to be doing what he was brought in to do.

So that leaves the offense. Who’d have thought that statement would ever be uttered, written, or in any other way stated? The bottom line is that unless and until Penn decides to go back to work, the line is in question and the team is collectively holding their breath. If Penn and the team can pull it together before this weekend, the team will likely be able to breathe that sigh of relief, but for now, we wait. There certainly isn’t a viable left tackle option beyond Penn who’s capable of keeping the allowed sack total at that position to one.

Will Rod Woodson be able to pull the secondary out of the dirt?

Rod Woodson is stepping into a new role as head defensive backs coach this year and his main focus should be working with his new assistant defensive coordinator John Pagano to fix the massive hemorrhage that existed on the secondary last year. Things are looking good so far, for everyone except maybe Sean Smith. He was demoted to second team reps this week, which doesn’t bode well for him, but gives us a picture of how well the new first-round draft pick Gareon Conley is doing. Even though he was dropped to second team reps, Smith is still listed as the first-string right CB, so perhaps he stepped it up enough to earn his starting spot back. That’s not worth putting money on, until Gareon Conley’s shin splint issue is resolved.

Just how good is Gareon Conley?

Finally! Conley has been completely cleared of the erroneous sexual assault charges and we can get back to football. Conley was impressing in training camp, until he pulled up with shin splints. Whether sidelining him is a precautionary measure or not, he’s still missing out on incredibly important play time with his team. In this video, Brett Kollmann provides an incredibly in-depth pre-draft analysis of Conley’s play during college. It’s clear where Conley’s strengths are, and very clear where improvements can be made. Is he the difference maker that he was drafted to be? Probably, but until he improves his ability to close gaps and bump and run, he’s not there yet.

Can the Raiders get over the fear of their enemies?

The last question yet to be answered, but certainly not least important. It might seem silly to think that the Raiders are afraid of a team like the Chiefs, who has done anything but improve in the offseason. At best, stability is what came of the Chiefs’ offseason. They lost some offensive weapons and have a shaky quarterback situation, with Alex Smith returning under center, promising continuing mediocrity.

Regardless of the Chiefs’ personnel challenges, one thing remains: the Raiders haven’t beaten the Chiefs annually since Derek Carr took over at QB. Carr has a 2-5 record against Kansas City. The mental wall that the team hits every time they step on the field against the Chiefs is a hurdle that they have to overcome in order to be considered the best. Until the Raiders can clear that hurdle, they’re stuck with the stigma of being good but not good enough.

The Patriots are a completely different story. Oakland goes into Mexico City with something to prove and they hope to take that opportunity and run with it all the way to victory. Whether they can do it will largely depend on match-ups. The most important problem facing Oakland is the defense. Regardless of boasting the reigning defensive player of the year, the team’s defense was embarrassing. If the Raiders can improve their overall defensive play even to middle-of-the-road, they have a very good shot at overtaking the reigning league champs.