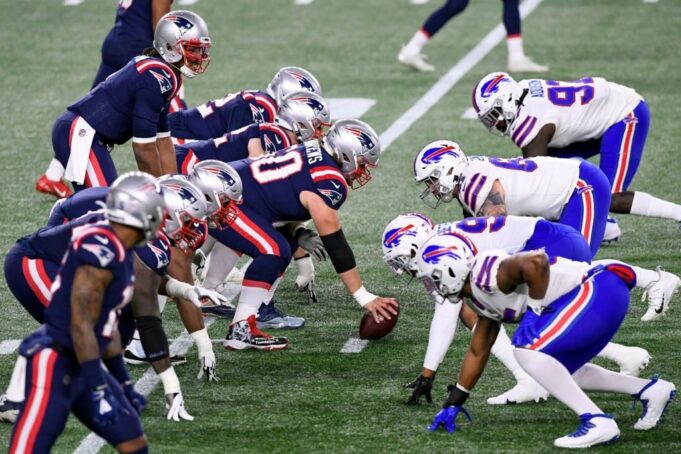 The NFL Draft and free agency is in our rearview mirrors. There is very little day to day NFL news aside from random minor transactions across the league and conversations about where/when this star player will be traded. The NBA and NHL playoffs are in full swing. Baseball is gearing up for a long, hot summer. The dog days of Summer are upon us. But that doesn’t mean we can’t look down the line at what else the coming summer months hold for us: Training Camp and the NFL preseason. Which leads us to a new feature here on The Grueling Truth – The State Of The League. We will be going over all 32 teams’ off-seasons, division by division: their player personnel moves, coaching changes, and projected preseason depth charts. Between the beginning of June and the end of July, new team reports will be released every few days. We are halfway done with the AFC East with the Buffalo Bills and the Miami Dolphins already done. Let’s see what’s going on in Foxborough with the New England Patriots.

This isn’t the same New England Patriots dynasty fans got used to over the last two decades. The Patriots went into 2020 with a new starting quarterback for the first time since 2001. That’s when a young Tom Brady took over as the starter for the injured Drew Bledsoe. New England went on to win it’s first Super Bowl title that season and never looked back. Since then, the Pats never had a losing season, have won 16 division titles, and won a total of six Super Bowls. After all that success, Brady signed with Tampa Bay as a free agent last offseason, and went on to win his seventh Super Bowl in his first season as a Buc. New England, however, didn’t have the type of season we had come to expect. The team struggled on both sides of the ball, stumbled to a 7-9 record, and fell to 3rd in the AFC East. New England spent more money in free agency this offseason than it ever has in a single offseason to speed up this rebuild. Will all these new additions help bring this team back to the glory they are used to?

Cam Newton came to New England on a one year “prove it” deal as a late free agent signing last offseason. Between an irregular offseason that affected practices and training camp due to Covid, to a lackluster supporting cast, and then actually catching Covid, 2020 was a year to forget for Newton. He looked like a shell of his former self at times last season, and wasn’t quite right after missing some time after catching Covid. It wasn’t all bad for Cam, however. He can still make plays in the passing game, and he was a real threat on the ground – his 592 rushing yards at quarterback ranked 3rd in the NFL, and his 12 rushing touchdowns led all quarterbacks (most rushing TD since his rookie season). New England gave Newton a new contract, but training camp will be huge for Cam, as he will have to show better timing/consistency/accuracy in the passing game, or we will see Mac Jones take over sooner than later. Jones isn’t an improviser/scrambler like Lamar Jackson or Kyler Murray; he doesn’t have a rocket arm like Josh Allen or Justin Herbert; he wasn’t even one of the top four quarterbacks taken in his class…but getting picked in the 1st round by the Pats was almost too perfect of a fit. Jones has his physical limitations, but he was the most accurate quarterback in the country on passes thrown under 10 yards in 2020. While that may make you chuckle (Chad Pennington, anyone?), let’s not forget this offense has been at it’s best when the quarterback is able to make quick, accurate, well timed short/intermediate throws, and make good decisions with the football. It will be a fun story to follow during training camp and as the season goes on.

New England’s offense was effective on the ground, but they were unable to finish drives and struggled to throw the ball, as they ended up 27th in points and 30th in passing. With the receivers failing to get consistent separation every week, and 2020 3rd rounders Asiasi and Keene providing nothing at tight end, it was clear the Patriots HAD TO upgrade the talent in the passing game. They spent a lot of money in free agency doing just that. The two tight end offense that New England once ran so effectively in the past is trying to make a comeback with the free agent signings of Hunter Henry (3 years, $37.5M) and Jonnu Smith (4 years, $50M).  Both of these players come with concerns, however, and both have already dealt with injuries during minicamp practices. For a guy who never had more than 448 yards in a season, it’s a little weird that Smith is now the 3rd highest paid tight end in the NFL, but he will have every chance to show he was worth the investment. Henry is one of the better tight ends in the league when available, but he has never played a full 16 game season (including missing the last two games of the 2020 season due to Covid). The team also added new outside options at receiver by bringing in Nelson Agholor (2 years, $22M) and Kendrick Bourne (3 years, $15M). Both are in line to claim the outside starting wide receiver spots with Jakobi Meyers in the slot. The team needs N’Keal Harry to take a big step forward and show why he was a 1st round pick.

Running back and the offensive line didn’t get as much attention as quarterback and wide receiver/tight end, but the remodeling continued. 4th round pick Rhamondre Stevenson has the size and skillset to be a three down back, and there is opportunity in this backfield. James White is locked in as the top receiving back, but the Pats use a runningback-by-committee approach, so Stevenson could push the injury prone Sony Michel down the pecking order with a good training camp/preseason. The Patriots’ offensive line was one of the best in the league last season, and the team expects it to be a strength again this year despite changes. However, there will be a new starter at right tackle and some reshuffling to make up for the huge loss of guard Joe Thuney to Kansas City in free agency. The team took advantage of Las Vegas’ own offensive line rebuild and traded for Trent Brown, then dealt away Marcus Cannon to Houston. Brown returns to New England after having seen his play drop with the Raiders the past two seasons, and hopes to return to the level of his first stint in Foxborough. Last year’s 6th round gem, Michael Onwenu, played very well as a rookie starter at guard and tackle. He will be moving to left guard full time to take over for the departed Thuney. David Andrews was re-signed to hold down center and is a key piece to this line, while Ted Karras was brought back after a one year stint in Miami to add depth at center and guard.

The offense definitely struggled and understandably got a lot of upgrades this offseason, but that doesn’t mean Belichick was going to forget about the other side of the ball. New England struggled a bit up front and sought to upgrade it’s front seven. The return of Dont’a Hightower (2020 Covid opt out) will definitely help versus the run, where the defense fell off and finished 26th. The team also signed several free agents who fit their versatile scheme to one or two year deals, including Kyle Van Noy, Davon Godchaux, and Henry Anderson – each of whom will likely fill key roles right away. Christian Barmore and Ronnie Perkins were excellent additions to this defense, and both should find significant playing time right away in sub packages. Barmore was my top rated defensive lineman in this year’s NFL Draft, and while inconsistent, he has the potential and pass rush ability to be an effective interior disruptor. Perkins took a big step forward this past season at Oklahoma, and was one of the top edge rushers in this draft class. Both of these players are versatile, played very well in limited snaps, and both figure to be in the pass rush rotation as rookies with room to grow into every down players. The big addition this offseason, however, was signing linebacker Matt Judon (4 years, $54.5M) as a free agent away from the Baltimore Ravens. New England’s 24 sacks tied with Detroit for 26th in the league, and Judon (39 pressures, 6 sacks in 2020) was one of the key pieces to helping the team improve that number.

The secondary should continue to be a strength for this team, but there is a big story brewing with star corner Stephon Gilmore. Gilmore is one of the top five cornerbacks in the NFL today, but he missed minicamp and is a potential training camp holdout in hopes of reworking his contract. Missing five games due to injury in 2020 doesn’t help his cause, but New England hasn’t given any indication of any intentions to trade the 2019 NFL AP Defensive Player of the Year, so we shall see how this plays out and how much time Gilmore misses. Adding Jalen Mills as a free agent to add depth at corner and safety was a solid move, and came before any of this Gilmore holdout tomfoolery. He figures to be in the mix to start outside opposite J.C. Jackson in the event Gilmore misses any game time.

Bill Belichick had to sit back and watch Tom Brady leave town and win the Super Bowl with Tampa Bay immediately after leaving New England. The whispers of “was it Brady or was it Belichick?” as to who was largely responsible for all of this organization’s success the past 20 years have grown louder now. We know this team won’t be down for long, but the division is getting better, and Buffalo is coming off an AFC Championship appearance. The offense has to be better through the air, and the defense has to get it’s swagger back, but the arrow is pointing back up for the Patriots after a solid offseason.