The Grueling Truth - Where Legends Speak / Pro Football / Rating the top 5 Quarterbacks in the 2016 NFL draft!

Rating the top 5 Quarterbacks in the 2016 NFL draft!

1). Dak Prescott, QB, Mississippi State
Height: 6-2. Weight: 226. Projected round 2-4
I know people will crazy for me putting Prescott number one. Hands down he is the prospect most likely to be a star out of this draft. Prescott is a fast-rising prospect after numerous teams fell in love with him at the Senior Bowl. They love his football I.Q., leadership skills and character. They feel he has the ability to quickly be a captain in a NFL locker room and a leader of men. At the combine, Prescott had a solid workout to maintain his rising status.

Prescott’s play has been somewhat reminiscent of Tim Tebow at Florida because Prescott is playing in the same offense for Tebow’s former offensive coordinator, Dan Mullen, the Mississippi State head coach. Like Tebow, Prescott needs to improve his pocket passing and accuracy for the NFL. But, unlike Tebow, his throwing motion will not need near as much work. To win a Super Bowl he needs a great Offensive line because he can’t throw people open so he needs time to find an open reciever. 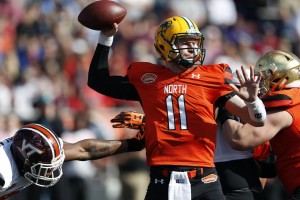 Height: 6-5. Weight: 232.
Projected Round (2016): Top-10 Pick.
Scouts have said they think Wentz is the best quarterback prospect in the 2016 NFL Draft. In early January, it was rumored, that the Browns’ initial preference was for Wentz over California’s Jared Goff. At the combine, Cleveland sources said that Wentz was a “stud. Absolute stud” in his interview, while Goff had a poor interview and was nervous. On the field, Wentz was the most impressive quarterback at the combine and showed off that he has the best skill set in terms of arm talent and athletic ability. As NFL scouts like to say he can make all the throws.

Wentz also had an excellent Senior Bowl showing off his big arm, ball placement, field vision and athleticism. Sources believe Wentz will continue to rise in the lead up to the 2016 NFL Draft.

The big challenge for Wentz, in my view, will be the drastic change in the speed of the game coming from North Dakota State’s opponents compared to the NFL. He also will need to mature into a leadership role.

On top of his good arm, mobility, pocket presence, field vision and accuracy. Wentz operated in a pro-style system with play calls in the huddle and working under center. In 2015, he completed 64 percent of his passes for 1,669 yards with 16 touchdowns and two interceptions while missing almost half the year with a broken wrist. Wentz also had four rushing touchdowns.

Why do I not rank him number one? Thats easy injury problems will hamper him during his career and whoever drafts him better have a good backup Quarterback.

3. Jared Goff, QB, California
Height: 6-4. Weight: 210 Projected top 10.
Goff threw well at the combine where he showed he can make all of the throws and is well developed from his feet up. He could stand to put more air under some throws, but overall he did well. Goff’s hands are on the smaller side and he ran a little slower than expected though. Sources with Cleveland said the interview with Goff was poor and he seemed nervous. Goff still should be a top-10 pick in the 2016 NFL Draft.

In 2015, Goff had a great senior season, but he didn’t play as well against quality opponents like Utah, UCLA and USC. Goff bounced back to close out the regular season well against Stanford and Arizona State.

Goff’s stats were inflated by a college offense that has a lot of instant passes, and coming from that system, he will need development for the NFL with field vision, working under center and holding up in the face of a pass rush. Goff displayed good mechanics at times but also had some issues maintaining that when faced with a lot of pressure, and that led to some bad habits of throwing off his back foot. He has said he is working to correct that problem.Overall I think picking him anywhere in the first round is very risky, he will need a lot of work with the right coach to turn into a big time QB. A great running game could make him a good pick but he is shaky in the pocket and to make it simple I would not trust him in a big game situation on a consistent basis.

4.Paxton Lynch, QB, Memphis
Height: 6-6. Weight: 244.
Projected Round (2016): 1-2.
At the combine, Lynch showed off his strong arm. He was slower than expected in the 40, and his footwork needs a lot of development to work under center (something he never did in college). The combine confirmed that Lynch has a skill set to develop, but he’s a project and not necessarily a candidate to start from his first day in the NFL.
However, there is a lot of work that Lynch needs. His footwork and field vision are the primary areas to improve. Lynch was inconsistent with passing accurately and working through his progressions. He needs to become more consistent with the ability to thrive as a pocket passer as well. His eye movement and working through his progressions need to be faster and more consistent. According to sources, his head coach Justin Fuente said that Lynch needs to mature on the field with his football I.Q. and needs to mature off the field to handle being a franchise quarterback. Fuente coached Andy Dalton at TCU, and he told NFL evaluators that Dalton was far ahead of where Lynch is coming out of college. Some teams have given Lynch a second-round grade.

Picking Lynch in the first round, in my opinion, would be a big mistake, and I really believe he is more of a late pick. He will NEVER be a starting NFL Quarterback and will be gone from the league quickly.

5.Christian Hackenberg, QB, Penn State
Height: 6-4. Weight: 234.
Solid QB whose style projects more to the NFL than it did college. Hackenberg is a pro-style quarterback who was forced to play in a college spread offense that didn’t fit him well at all. Sources say that Penn State head coach James Franklin beat Hackenberg down and handled him terribly. Teams also admire that Hackenberg could have transferred in the face of a lot of adversity for the program, but he stayed committed to trying to help get things headed in the right direction in Happy Valley. Hackenberg will be out of the league within three years.

The 1988 Cincinnati Bengals: Kings of the Jungle!

No matter what team you cheer for, there is always that one ...

Remembering the 1977 Broncos and the Orange Crush Defense!

The Denver Broncos, like several franchises, did not have a good start ...

From Worst to First: The Unlikely Rise of the 1979 Tampa Bay Buccaneers

Five wins in three seasons—twenty-six losses in their first 26 games. When ...

Get your Free Bet now!
Latest News
The Hypocrisy of Major League Baseball, Gambling, Steroids, and Why it’...
If you have ever read my previous articles ...
The 1988 Cincinnati Bengals: Kings of the Jungle!
No matter what team you cheer for, there ...
Remembering the 1977 Broncos and the Orange Crush Defense!
The Denver Broncos, like several franchises, did not ...
From Worst to First: The Unlikely Rise of the 1979 Tampa Bay Buccaneers
Five wins in three seasons—twenty-six losses in their ...
2022 NFL Mock Draft 1.0
With the playoffs here, and the top 18 ...
Betting Tips
Betting Tip: Phoenix Suns vs Golden State Warriors
Tip:
Over/Under
Odd:
1.29
Current Bonus:
100% up to $500