The Grueling Truth - Where Legends Speak / Pro Football / The People vs. Vontaze Burfict

The People vs. Vontaze Burfict

The People vs. Burfict

Heavy-hitting overaggressive defenders have always been a part of the NFL: Names like Jack Tatum, Steve Atwater and Rodney Harrison are synonymous with this style of play, and Vontaze Burfict is the latest in this lineage.

The league has changed since the days of Tatum and Atwater (and rightfully so), as recent years have brought long-term player safety concerns to light; the result has been necessary rule changes to protect players. Burfict has been fined several times in his NFL career and was suspended for the first three games of the 2016 season. His infractions have ranged from unsafe tackling techniques to late shots on opponents to obscene gestures. Player safety is paramount and player conduct should be kept in check by the coaches and officials, but the way Burfict’s actions are viewed is frequently out of step with the interpretation of similar actions by other players. To demonstrate this, here is a closer look at some of Burfict’s most recent notorious headline-makers.

Bengals vs. Steelers – December 13, 2015
There was a lot on the line for both teams in this game. The Bengals could seal an AFC North title with a win; the Steelers were still alive in the divisional race and in contention for a wild card spot as well. Burfict and Steelers linebacker James Harrison got into a pregame screaming match which set the tone for the rest of the Bengals/Steelers series that season.

The Bengals lost starting quarterback Andy Dalton to a season-ending injury and, in a losing effort, Burfict earned fines on two personal fouls and a low hit on Steelers QB Ben Roethlisberger. While this performance was not exactly a stellar showing of sportsmanship, it is not a major departure from the norm in the NFL.
The NFL has now caught up with the college game and ejects players who are called for multiple personal fouls in one game, but this was not the case at the time. Burfict’s hit on Roethlisberger was low, but Burfict appeared to be tripped up in the process of rushing the passer. The hit was illegal and the fine was warranted, but this was by no means a dirty play. 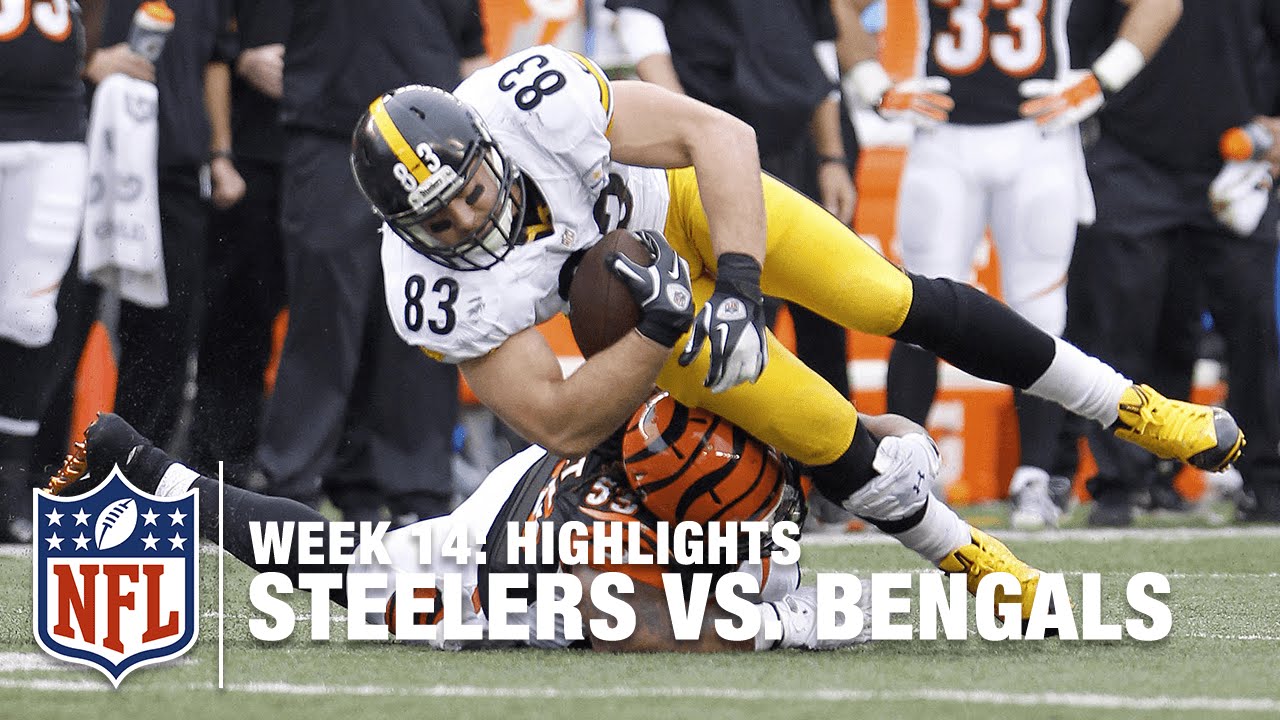 Bengals vs. Steelers – January 9, 2016
When the two teams met in the playoffs a few weeks later, everyone knew what was coming. Tensions rose early in the game when a Burfict sack resulted in a Roethlisberger injury. Late in the game, Burfict was called for unnecessary roughness when he hit Antonio Brown in a defenseless position: Burfict threw his shoulder into Brown’s head, causing a concussion.

This was a good call by the officials, as it matched the intent of the rule to protect players. The play led to fines to multiple players/coaches due to the resulting chaos on the field. Burfict’s actions not only earned him a fine, but also a three-game suspension. While the hit was dangerous, the penalty was not in line with the league standard. These types of hits occur on a regular basis in the NFL, with flags and fines generally the result, not suspensions. So why were Steelers coaches on the field? The flag had already been thrown. The officials were doing their job to protect Brown and other players.

It is also worth noting that Burfict’s hit was not the only dangerous hit in the game. After Bengals running back Giovanni Bernard caught a short pass late in the third quarter, Steelers linebacker Ryan Shazier tackled him, striking first with the crown of the helmet directly on Bernard’s helmet. This hit put both players in an extremely dangerous position. No flag was thrown and Shazier was not fined. 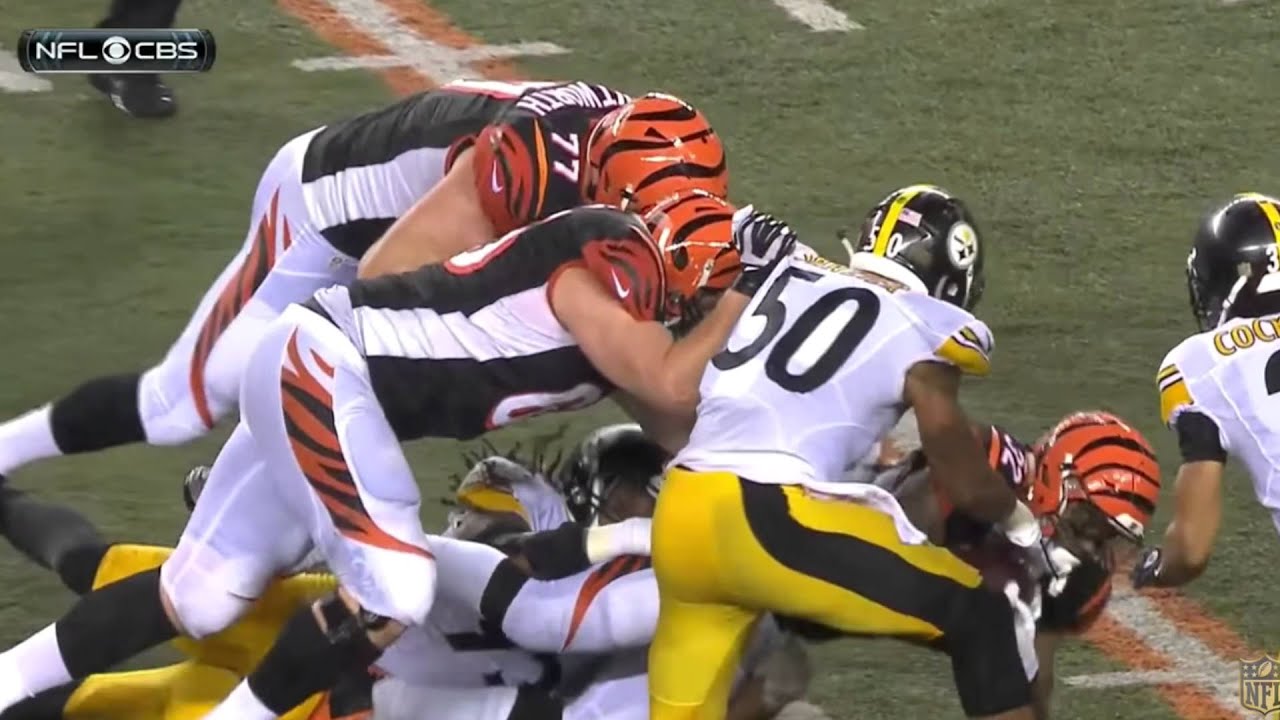 Bengals vs. Patriots – October 16, 2016
Burfict was fined in this game for allegedly stomping on LeGarrette Blount following a touchdown run by the Patriot running back. Video of the incident is unclear: While it does look like Blount could have been stepped on, there is nothing to indicate malicious intent. Blount certainly didn’t seem injured, as he was quick to his feet to push Burfict to the ground.

The other play of note was a hit on Patriot tight end Martellus Bennett, for which Burfict was not fined. On the play, Burfict bit on a Tom Brady pump fake, diving for Bennett’s legs. The Patriots were not pleased with this and an altercation ensued. The fact of the matter is that the hit was perfectly legal, and Burfict did exactly what the Patriots intended him to do by biting on the pump fake. The reaction to this play shows that Burfict’s actions are judged based not on what he did but on who he is. 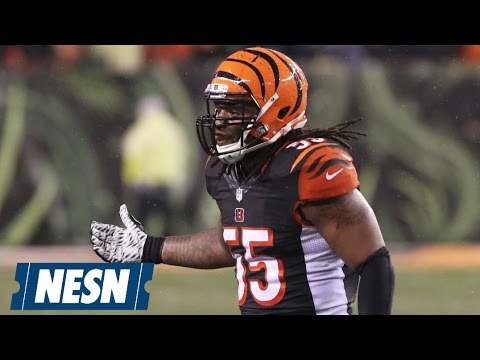 Bengals Training Camp – August 1, 2017
The 2017 Benglas training camp got a little heated for the Bengals when Burfict broke through the offensive line in a non-padded drill and tackled teammate Giovani Bernard at the knees (one of which had been surgically repaired this offseason). As a result, tempers flared and players began to mix things up.

The Bengals coaching staff corrected Burfict, who was certainly in the wrong. Burfict says he tripped, which is feasible as he was running through a heavily occupied area at the time. The national response to this incident was out of proportion with what actually happened. Much like the Roethlisberger hit in December of 2015, it was something that should be punished but was an accident rather than a personality flaw.

While he has been fined and penalized multiple times for good reasons, Burfict’s actions between the whistles are not unlike most players in the league. His suspension seemed to be more the result of his image than his actions.

As demonstrated by game-stopping reactions from Patriots and Steelers players and coaches, this problem is not just with fans and league officials. Player safety is of the utmost importance and penalties, fines, and suspensions should be distributed in order to protect the long-term health of players. Each play, however, should be judged on its own merit and not on popular opinion of the player involved – even if it’s Vontaze Burfict.