Why the Alliance of American Football Can Work

A new Spring football league. I have heard this before and it never works, except this time it just might. I have paid very little attention to the Alliance until I saw during Super Bowl 53 that it was going to be shown on CBS. That alone gives it validity and then when you see that guys like Bill Polian are involved and you look at the cities and coaches they are using, it makes even more sense.

While the AAF says it’s more like the NFL than not, one key difference is in compensation. From the starting quarterback to the backup defensive end, each player is on a three-year, non-guaranteed $250,000 contract. This is a matter of leverage among commodities. The players in the AAF will have no leverage and no agents, so that means no Le’veon Bell situations in the AAF. I really like the bonus scale in the AAF also, as the bonuses are based more on the team’s performance than the performance of the individual player.

The two ways AAF players make bonuses goes like this: they are achieved whenever one side of the ball does something significant, like score touchdowns. On defense, let’s say Orlando leads the league in defense. The entire team will get a bonus if they play on defense.

Players can earn individual bonuses but here’s the catch those individual bonuses are actually earned OFF the field. players can earn bonuses through their work in their local communities and social media outreach for good causes because that builds the goodwill between teams and fanbases. This is a huge incentive for the league that will build a connection between the fans and players in those individual communities. The best way to market your business in any community is to show that community that you care and it’s where a lot of teams have failed in the past. The most important thing to these new teams is to connect to the community to let the fans know the organization actually cares about the community and is not there to just make a quick buck.

Let’s face it, an NFL game can become a tedious thing to watch for fans as games average over three hours a pop anymore. The NFL has had problems with attendance because the game has become better to stay at home and watch on your big screen HD tv. If you think the overabundance of commercials is bad when you are watching the game from the comfort of your own home, imagine sitting at a game where every few minutes you get a commercial. At least at home you aren’t out in the elements watching the game and you don’t have to wait in line to go to the bathroom or stand in line to buy $8 Nachos or a $10 beer.

The AAF is trying to achieve a shorter 2 hour and 30-minute game with a 35-second play clock, fewer commercials, and no kickoffs–yes, no kickoffs. Those are gone for player safety purposes, but also in response to what the league has determined to be the least interesting play, the onside kick. Instead of an onside kick to try to get the ball back, the AAF will allow teams after a score to opt to have the ball at there own 35-yard line and they will get a fourth down and ten play which gives them a chance with a first down to keep the ball. Which means if your team is trailing by say 14 points with two minutes left, you have a much better chance to win a game, which keeps the games much more interesting.

The AAF will force teams to go for a 2-point conversion after each touchdown scored, so no more boring extra point attempts.

Who are the teams, and players? 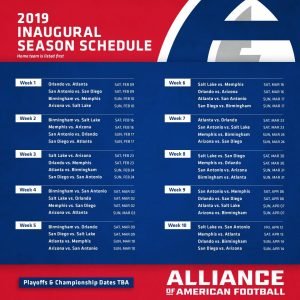 The great thing about the schedule is we will get football on Saturdays and Sundays still!

Where will the teams play?

How do I watch the games?

The first AAF game is on Feb. 9, between Atlanta and Orlando, is on CBS. Going forward, there’ll be a game per week on CBSSN, with those streamed on the AAF’s website.

TNT will broadcast one regular season and one playoff game per season, per Sports Business Journal. The NFL Network’s going to take two games per week and will broadcast a total of 19 games.

So it seems that if you want to see every game played you will be able to do just that!

What happens if the league is a success?

If the league does well it is going to raise the bar and make things much more difficult for Vine McMahon’s XFL, which is slated to start next year. It could also sound a death knell for Arena Football and Indoor Football, which has already seen a steady decline over the last decade. The Indoor leagues and Arena Football leagues are already fighting bad public perception for years because of shady business practices which have left bridges burned in many cities. And with the AAF and next year the XFL’s return, the players just won’t be there for the indoor leagues to really be viable anymore.

Previous article
« Gervonta Davis and Jose Ramirez Return on Showtime and ESPN
Next article
What Should the Blue Jackets with Panarin and Bobrovsky? »