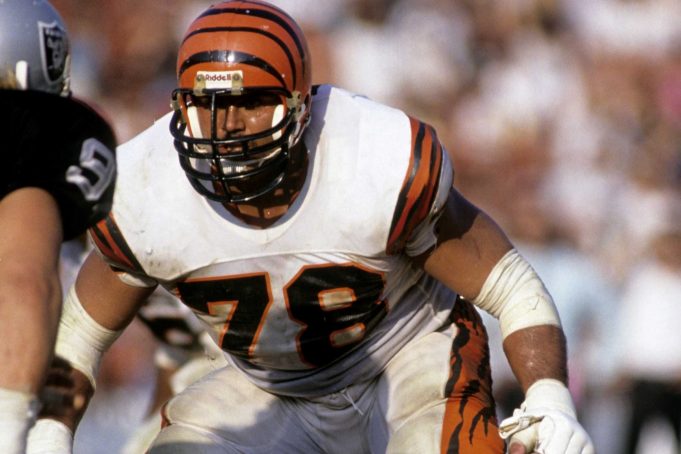 White began his professional football career with the Minnesota Vikings after being drafted in the second round of the 1969 AFL/NFL draft. He is one of 11 players to have played in all four Vikings Super Bowl appearances between 1969 and 1976. Before the 1978 season, he was traded to the San Diego Chargers, with whom he played until 1985 when he retired after seventeen years and 241 games. Mainly used at offensive guard, he was selected to the Pro Bowl four times. He played as an offensive lineman for the Chargers 1978-85.

Tingelhoff was one of 11 players to have played in all four Vikings Super Bowl appearances in the 1970s and is considered the best center of his era.

He played for the Dolphins for eleven seasons and set team records for 118 consecutive starts and seven straight Pro Bowls. If not for injuries at the end of his career he would already be in the hall of fame, and on this list probably top 10.

Jones was listed at 6’5 and 325 pounds. One of the best lineman to ever come out of the University of Alabama, Jones was drafted 6th overall in 1997 by the Seattle Seahawks, the team he spends his entire career with. He started every game in which he played, beginning with his rookie season. Seahawks coach Mike Holmgren called Jones the best offensive player he had ever coached.

Jones was a nine-time Pro Bowl selection and seven-time All-Pro. Jones was perhaps the best at his position in the NFL during the early part of the decade, exemplified by being voted to the NFL’s 2000s All-Decade Team.

At his playing size of 6’5″ and 265 pounds, Shell could still drop his hips and make a nice wall on the edge of the line for running back Mark van Eeghen to bounce to the outside. In the passing game, Shell helped to sink his hips and had an aggressive punch to help set up Ken Stabler and Oakland’s vertical attack. During his 15-­year career, Art Shell was named to eight Pro Bowls and two First­-Team All­-Pro lists.

Faneca was one of the top offensive linemen of the first decade of this century. He was named to the 2000’s all-decade team and was a nine-time pro bowler.

As a Raider, Gene Upshaw played 15 seasons at guard between 1967 and 1981. Upshaw started 207 out of 217 career games and was named to seven Pro Bowls. Upshaw was also a two­-time Super Bowl champion­­ with rings in 1977 and 1981. Upshaw went on to be the President of the NFLPA, his work there was unfortunately not always in the best interest of the players he represented.

He wasn’t drafted into the NFL because he was undersized, standing 6’2 and weighing only 255 pounds. He made sure to prove all the teams that passed up on him that he was one of the biggest mistakes those franchises have ever made. He went on to appear in three Pro Bowls and was a nine-time AFL All Star.

Shields blocked for Marcus Allen, Priest Holmes, and Larry Johnson during his career. He had blocked for 1,000-yard rushers for five seasons. He blocked for 4,000-yard passers for five seasons while Elvis Grbac did it in 2000 and Trent Green in 2003, 2004, and 2005. In fourteen seasons, Shields never missed a game, and he failed to start only one contest, his first regular-season outing, as a rookie in 1993. He was selected to the pro bowl 12 times and was named to the NFL’s all-decade team for the 2,000’s.

Dierdorf was an incredible player during his time in the NFL career. Dierdorf began his career as a guard and left tackle before settling in as a starter at right tackle in 1974. In 1982, he moved to center and was the starter in that season, but became a back-up in his final year, 1983. Dierdorf was named to the Pro Bowl 6 times from 1974–78 and 1980. Dierdorf was named All-Pro for four consecutive seasons beginning in 1975.

“Iron Mike” was the greatest center of all time and the most impressive out of a long list of dominant centers from the Steel City. Webster was tenacious, as he made line calls to protect Terry Bradshaw and open up holes for the likes of Franco Harris and Rocky Bleier at running back. It’s because of his work in the gritty Steel City that Webster was selected to nine Pro Bowls­­ (1978-1987). Stephenson was either the greatest center I ever saw, or he was second. Since I could not make up my mind I called it a tie.

Randall McDaniel roamed the front lines as a cut, physical specimen, who could fly around the line of scrimmage and had a mean streak. A fixture of the Pro Bowl, McDaniel made the trip to Hawaii for a record 12 straight years. McDaniel’s versatility showed when he was on the Vikings, as he would protect the quarterback and, then, kick out linebackers as a pulling guard.

As a professional, he went first overall to the Rams in the NFL Draft 1997. In St. Louis, Pace protected Kurt Warner’s blind side for “The Greatest Show on Turf,” which also featured one of the most high powered offense in recent NFL history. At left tackle, Pace was named to seven Pro Bowls and is a member of the 2000s All-Decade team.

Matthews, an Oilers/Titans franchise lifer, lined up at all five offensive line positions. That’s versatility right there. Bruce Matthews was especially dominant at center and guard where he was a Pro Bowl mainstay between 1988 and 2001. An Iron Man at offensive line, Matthews is now second only to Brett Favre atop the professional football career starts list, with 292 career starts.

“The Hog” made up for his lack of size with speed, agility, and fiery intensity. He worked and made his technique as perfect as possible, so he could get leverage no matter the situation. It’s because of his athleticism that Hannah was especially effective as a pulling guard, who could get out front of the runner and act like a second fullback. John Hannah was selected to nine Pro Bowls between 1976 and 1985. Most impressively, he was named lead guard on the NFL’s 75th Anniversary All­-Time Team.

Gregg played in a then-record 188 straight games between 1956 and 1971, which, as an offensive lineman at that time or in general, is not an easy feat to accomplish. During this period, Gregg made an impressive nine trips to the Pro Bowl and seven appearances on the First­-Team All­-Pro list. As a right tackle, Gregg will forever be immortalized for sealing the edge and creating alleyways on the Lombardi power sweep, the most run play in the extensive playbook of the master himself.

appeared in 11 straight Pro Bowls until his 2007 retirement. At 6’9″ and 340 pounds, Ogden helped pave the way for Baltimore’s bruising Jamal Lewis, who racked up 2,066 rushing yards in 2003. Ogden also helped bring one Super Bowl XXXV ring home back to Baltimore during his playing days.

At 6’3″, 325 pounds Allen used his strength to move people around and was a mauler who instilled fear in his opponents without having to resort to dirty tactics. He earned 11 trips to the Pro Bowl and got inducted into the Pro Football Hall of Fame in 2013.

At left tackle, Muñoz was the total package of size, strength, athleticism, and technique. He revolutionized what it meant to be a powerhouse left tackle. In the passing game, Muñoz routinely shut down the game’s best defensive ends and outside linebackers with his quick feet and heavy hands. In the running game, he could wall off his man for two counts, pancake him, and rumble downfield to create chaos on the second and third levels.

The Bengals are lifeless in a loss to the Bears, the Fault is Zac Taylor’s

2 NFL Teams That Could Surprise and Make the Playoffs in...