The good and bad

Responding to this situation is one of the toughest things I have ever opted to do in the realm of sports writing. My initial draft after hearing the NFL upheld the indefinite suspension was expletive-laced and angry. The second sounded too sad. After much thought, I will share three truths that are visible in light of the entire debacle.

TRUTH ONE – The NFL is an entity unto itself, and no number of fiery Tweets or angry petitions will change that. I straight-up hate what is happening with Garrett. Unfortunately, the NFL doesn’t give a fuzzy rat’s ass what I feel about their policies. This isn’t me being defeatist. This is me being real. As individuals, we do not matter to the NFL. We barely register as a blip on their radar. If, and it’s a big if, we ever want anything to change, our wallets will have to do the talking. For those of us who wither under a dark, football-less sky from February until draft day, this poses an existential dilemma. To reform the NFL essentially means giving up the NFL and hoping enough others join the boycott.

The NFL Players Association Collective Bargaining Agreement effectively hands the final say in matters of suspension to the NFL Commissioner. So despite the notion that an indefinite suspension was not permitted according to the CBA, Rodger Goodell had the final say.

Personally, I believe that Garrett’s appeal was merely for show. The powers in the appeals process had already decided the punishment would be upheld, long before Garret boarded the plane to New York.

TRUTH TWO – Cleveland Browns fans are more loyal than the day is long. I don’t know how much Twitter time I have logged since Thursday, November 14th. Hours to be sure. While on Twitter at all times of the day and night I consistently saw Browns fans loudly and proudly stating Myles Garrett’s case, creating petitions, and even being suspended by Twitter for efforts undertaken to defend Garrett.

I know there is a sizable collective of fans planning on heading down to Pittsburgh on December 1st to show support for Garrett by wearing his number 95 jersey. While I feel concern for their safety, I cannot help but admire the heart and passion. Browns’ fans transcend fandom and elevate it to family.

TRUTH THREE – Myles Garrett is as good a man as he is a football player. Yes, the helmet swinging was bad. I stand by the assertion that Mason Rudolph reignited a fire that was already put out when Pittsburgh’s David DeCastro restrained Garrett and moved him away from Rudolph. Rudolph admitted this (at roughly 3:37) in a press conference.

However, through all of the insults and injustices tossed at Garrett, having every opportunity to plead his case in the court of public opinion, he took the high road.

Following the NFL upholding his indefinite suspension and the apparent leaking of confidential information shared at the hearing, Garrett took to Twitter. In a measured response, void of malice, he explained the circumstances surrounding confidential information being made public. All of this adversity has displayed Garrett’s strength of character. 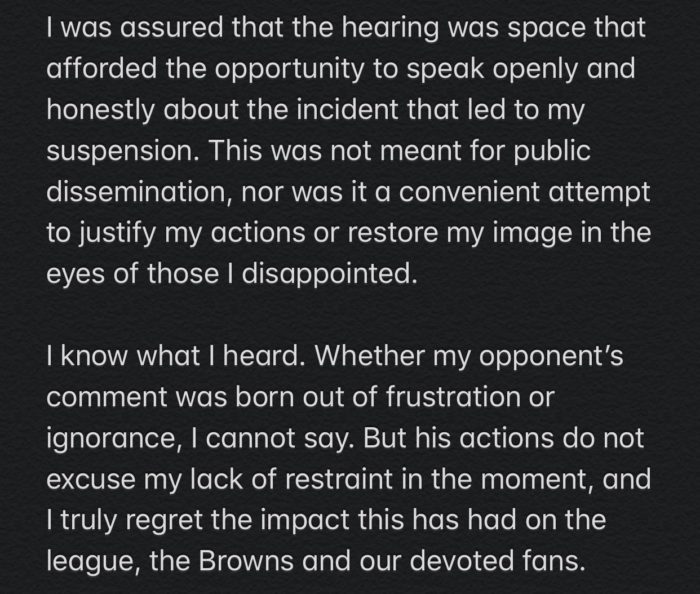 Could this be the last chapter of this incredulous story; that might depend on what happens in Pittsburgh on December first.

The Big, Tall Wish “In this corner of the universe, a prizefighter ...