Ranking the Top 8 Wide Receivers in the 2019 NFL Draft

Who are the top WR's in the Draft?

Let me start off before announcing the rankings that this is NOT my prediction of the order this position will be selected. This is my rankings of the top Wide Receivers in this draft.

Campbell is an explosive playmaker who has great burst and gets good separation. Concerns have existed about his hands, but those have quieted since his NFL combine where he showed nice hands in the open field. His 2017 season was not great because the Buckeyes did not have a great passing game, but last year the Buckeyes had a Quarterback and Campbell was a very dangerous player. Brown is a better player than DK Metcalf. He was a team leader at Ole Miss and plays with great confidence and is a good route runner. He would thrive in a west coast type of offense. Brown would also thrive in the slot in the NFL.

Brown is a quick receiver who is not a burner with rare speed, but he makes up for it with polish and physicality. Brown is very dangerous with the ball in his hands. He uses his well-built frame to break tackles and is very difficult for a lot of defensive backs to get on the ground. The question remains if he is fast enough to be a good NFL receiver, but I think he will have a very nice career. 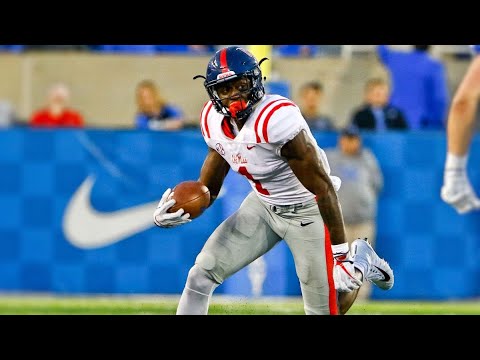 Ridley is a great route-runner with great hands, and he is consistently good. In the red zone, he has a plethora of moves that make him almost impossible to defend.

He has a great burst on his first step and is excellent at getting separation and he has the ability to do it while going full speed. Let’s begin with what Samuel does well, which is pretty much anything and everything. Speed, 4.48 40-dash is good. Route running, check. Catching, check. Production, check. To sum it up, outside of height he is the complete package.

His senior season consisted of a stat line of 62-882-11, with the touchdowns being especially surprising considering that he isn’t the tallest or most physically imposing receiver. Samuel’s 39-inch vertical certainly helps in that department, however.

His speed and footwork are amazing and he could be a big-time receiver in the NFL. The great thing about Butler is he’s not only a great downfield and endzone threat, but he can also run good intermediate routes with decent cuts, considering his size and high center of gravity. He has enormous hands and he is a freak athlete who is more than a handful in the open-field to tackle. He is also great at getting separation.

Butler’s body control and his ability to stay in-bounds, whether he drags his toes or contorts his body, is certainly something you don’t find in many 6’5’’ Receivers. Butler is the best of this class at making back-shoulder catches. He is definitely being undervalued in this draft class and some team will get a steal with him. His open field speed is great and, when paired with two great college quarterbacks, he was able to produce at a high level. He is great in open space and his ability to quickly cut and his explosiveness makes him the fastest receiver in this draft. Brown is not a great route-runner as he tends to round off his cuts and that will have to be fixed if he is to have a great NFL career.

Overall if he is picked in the third round or later this would be a solid pick, but he has a lot to improve on to be a quality wide receiver and I question his ability at the NFL level to gain separation. Harry is a freak natural athlete. He was the DK Metcalf of this draft until Metcalf’s combine showing and in my opinion he is still a better selection than Metcalf. Harry is not explosive off the line and he has trouble separating which is all worrisome.

Why I like Harry is that when you talk to his teammates and coaches they absolutely rave about his work ethic and leadership, which can be very hard to find these days. Metcalf blew away the competition at the NFL Combine with his blazing 40 and his lack of body fat. The thing that stuck out to me though was his 3-cone drill (7.38) which was absolutely atrocious. In comparison, Tom Brady had a 7.2 3-cone drill back in the day. So while Metcalf may have blazing straight-line speed, his ability to quickly change direction has to be questioned, and that is a huge question mark to me.

Another issue with Metcalf is injury concerns as he has been hurt for large portions of his career. He still has tremendous upside, but he MUST work on his route running to be a quality NFL Receiver. He will probably go in the first round but he shouldn’t.