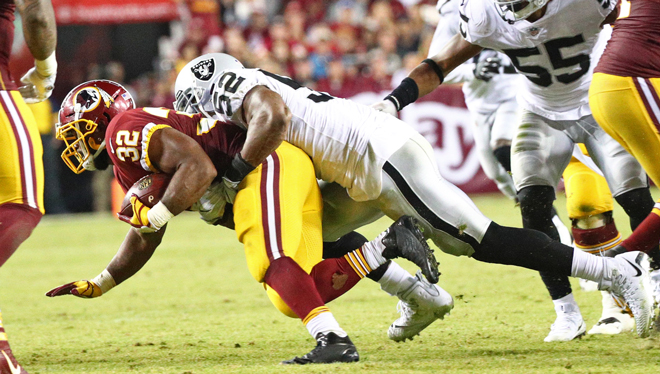 Pretty much the only bright spot for the Oakland Raiders on Sunday was their kicking game. Aside from that, you’d be hard pressed to take positives away from the beat down the Raiders took while all of America was watching on Sunday Night Football.

But while both sides of the ball, offense and defense, played poorly, the defense gets a pass.

I know that thought is almost cringe-worthy for many of you and I understand why. I was one of the biggest proponents of firing Ken Norton, Jr. in the offseason. But what happened on Sunday night cannot be put on Norton or the Raiders defense.

First of all, through the first two games of the year, the defense played much better than it was playing last season. Sure, it was clearly still a work in progress but it was also a work that had shown progress. If the Raiders defense had been bad in weeks one and two then was a no show once again, I’d be putting a ton of blame on them.

Thing is, not only were they decent in the first two games of the year, they were decent on Sunday as well.

Let’s take a look at how the first half of the game went down for the Raiders:

The Raiders defense forced punts by Washington on four of their six first half drives. No, the two touchdowns are not ideal, but when your offense only puts up 47 total yards and can only muster two first downs, forcing four punts is damn impressive.

When you spend over 20 minutes of the first half on the field while your offense spends less than 10 minutes on the field, forcing four punts is damn impressive.

When the only scores you give up came on turnovers and every other drive resulted in a punt, that’s pretty impressive as well.

Through the first half, the Raiders were playing darn good defense and were the only reason these teams went into halftime separated by only two scores. Had the Raiders defense played like they had last season, this game would have been at least a three or four score difference by halftime. But they didn’t. They played like the improved defense we saw in weeks one and two. Far from perfect, but good enough to win if the offense is playing well.

But the offense wasn’t playing well. In fact, it was playing so poorly it gave the defense no chance to succeed. The defense played admirably well considering the circumstances of the game but couldn’t keep it up through the second half. By the end of the night, they had spent nearly 40 minutes on the field and when you consider how little the offense did, it’s impressive the Raiders didn’t lose by 30 points.

Click Here to Read the Rest of the Article

NFL News and Notes Week 3: Beckham to play? Carr most impressive, Zimmer on hot seat, Fantasy plays of the week and much more