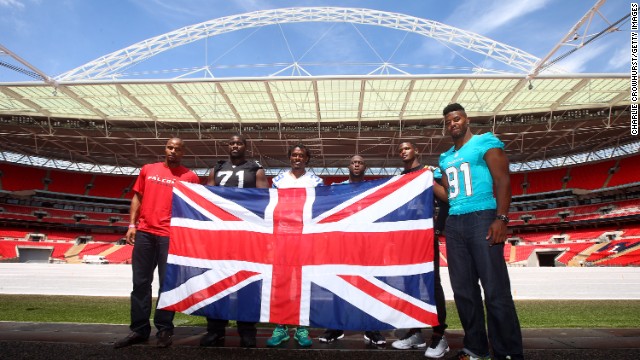 It’s the last game at The Georgia Dome, the home of the Atlanta Falcons. The dome is at a full capacity, they’re hosting the Green Bay Packers in the NFC Championship, win this in front of their own passionate crowds and they’re off to the Super bowl in Houston for what would be only their second appearance in the big game.

Throngs of media stalk the touchlines, hoping a recognizable face can provide them with a sound bite of useable content. By chance the UK Sky Sports presenter seizes the opportunity for a brief interview with the all-powerful Roger Goodell. The head honcho, NFL Commissioner extraordinaire. A graduate from the small college of Washington & Jefferson. It’s through Goodell’s leadership that the Owners, Players and fans take their lead. This soundbite offers the general party line. ‘It’s something they’re interested in’ ‘It’s something that needs investigating’ and ‘Boy, UK fans sure are passionate for the game’. Thanks for that Roger – prepared to commit?

Media speculation increases every time the honoured club of NFL franchise owners assemble to review the current exploits of the league and discuss their heavy expectation of exploiting further revenue strings and the potential development and augmentation of league growth by taking advantage of new markets with an increase of franchise opportunities.

Following the news in June that Nevada City Las Vegas had been granted a National Hockey League (NHL) franchise, the NFL was not too far behind. Encouraging the Raiders franchise to pursue relocation from Oakland to a new home in Las Vegas. To the NFL patrons the Las Vegas market has always been of intrigue, the brand NFL should always be protected thus new franchises and expansion are to be safeguarding with the maximum research, marketing and the ultimate safety measure, financial investment. Las Vegas has history, to many in the rest of the World Las Vegas throws up images of heavy gambling, scantily clad pole dances and holes in the desert approximately the same size as a Mafia hoodlum or two. The NFL safeguards any potential expansion with requests for large amounts of dollar investment, a deposit of goodwill paid directly to the administration from the desperate sports starved cities that have garnered a relationship with an opulent individual, a person with rich aspirations, to join the most elite club in the world, the fellowship of NFL team owners.

Unless, of course, your money has been garnered from the vast gambling trade, as much as cash rich tourists vacating to Vegas appeal to the current batch of owners, the league does not want to be tarnished with the ‘Gambling’ brush, especially with the vast monetary value wagered on NFL results. Even though billionaire casino mogul and Sands Corp Sheldon Adelson had been in at the start of discussions of the Oakland relocation, it seemed just as the deal was about to go through the NFL stakeholders seemed to change their mind. Adelson’s money, an initial investment of $150+ million US dollars was of no use and had no value.

Adelson investment was a relevantly small chunk of a package put together. A small amount within the astonishing estimated $1.4billion dollars required to build a new stadium for the Raiders. With real estate land in Las Vegas at a premium the conservative estimate ceiling would have no doubt been shattered, it’s a well-known fact these new builds never actually come under budget…perhaps we should all become architects?

Unlike English football (soccer) which contains approximately 90 professional clubs almost every major City or Town can list a professional soccer club – there are only 32 professional American football teams competing in the NFL. The demand for a franchise is incredible. It is deemed an honour for your home city to home a franchise, thus it’s the responsibility of the cities councils to provide the team with top class playing facilities and will often use the unenviable task of raising levies against the citizens of said city/state. With ever increasing infrastructure costs the good folks of Atlanta, still mourning from their loss to the Patriots, will once again have to dig deep to raise an ever-increasing figure climbing north of five hundred million US dollars.

So, it is suggested that by using the figures quoted by the Atlanta Falcons in the build of the Mercedes-Benz stadium and the figures proposed by the Oakland Raiders consortium, the largest financial investment an expansion or relocation franchise will make is in its stadium.

In this country, the stadium attendance or ‘gate’ is the largest income for many professional sides. We have come a long way from the decrepit concrete monstrosities that blighted the eyeline, many built and not updated since the turn of the twentieth century. We now have all seater stadiums lavishly named in income spinning naming rights as the Emirates Stadium (Arsenal) King Power Stadium (Current Champions Leicester City) and the Macron Stadium (Bolton Wanderers). However, it took an awful day and a tragic loss of life over twenty-five years ago to start this catalyst of new build and safety improvements.

At a FA Cup semi-final game between Nottingham Forest and Liverpool in 1989, England and its national sport Association Football suffered an immeasurable human disaster. A disaster that still sadly reverberates with so many today, scarred by the events that occurred that day.  Just after kick off the play was halted. Several hundred Liverpool fans had spilled out onto the pitch. The country watched on as the tragedy unfolded before them, many of them regular football supporters who had experienced the terrifying crushes in stands up and down the country.  that were over filled time and time again. Ninety-Six innocent supporters perished that day. Young and old, fathers and sons. The youngest victim Jon-Paul Gilhooley was just ten years old. The nations game would be rightly scarred, a sporting occasion that caused so much pain and anguish to the people of Liverpool.

The Hillsborough Tragedy would eventually lead to a safety review and revolution of sorts. With the knowledge of the awful disaster ringing in the ears of club owners and the government, that had led a tough stance on the hooligan issue that had blighted the games terraces over the previous decade, may have been avoided with a more vigorous financial investment in the nations stadia, many of which had stood without improvements for over a hundred years. All seater stadiums a government issued act changed in the first instance the way spectators viewed a game it would also change the demographic of the fan base.

The implemented rule change signaled vast investment by the clubs up and down the land, inspired by Glasgow Rangers Ibrox stadium in Scotland clubs in England built expensive and aesthetically pleasing stadium, we would still be a long way off from the epic build of JerryWorld in Dallas but large attendance stadiums sprouted out of the earth at a rapid rate. As clubs throughout the country invested heavily in their future, the safety aspects at the forefront of their minds. The final implementation of plans would ensure a level of safety and comfort never attained before in UK football stadiums thus enticing paying families through the turnstiles.

“We are committed to hosting NFL games in world-class venues and are excited to partner with Tottenham Hotspur to play games at their future stadium,. We share a vision and commitment to creating the best experience for our teams, fans and the local community.”

The NFL have been continuing a project, a test. Could another country process the infrastructure, Stadium and enough knowledgeable fans to sustain the biggest expansion of them all. A franchise on foreign soils. Since 2007 the NFL has increased its drug hit within the UK, drip fed, one game a year, a yearly one-off festival of gridiron. To the delight of the NFL and its consortium of franchise owners rubbing their hands in financial glee. An increase of games followed, two then three even four was met with such an unprecedented desire to attend game from the paying public. As a group of fans, we have been inscrutably tested, we have passed every examination of our need for Professional football, the NFL has now presented us with our greatest trial, the impossible… to sell 82000 tickets for a Cleveland Browns game. I’m sure we’ll pass this sternest NFL check with gusto – we’re a stoic bunch us UK NFL fans, I will be there at Twickenham – my son is a Viking’s fan. Though I may be ill on the day of the game. (cough cough wink wink)

So the stadium aspect of a potential relocation the biggest financial stumbling block is quite honestly covered. London has now showcased more than a dozen games. On a recent family visit to London we were more fascinated by the throngs of Washington Redskin fans than Buckingham Palace.

London has three 60000 plus stadium assets. A fourth, the new home of Tottenham Hotspurs FC has been designed with NFL franchise aspirations in mind. The early incentive, a twenty-game contract over ten years. We have modern all seater grounds throughout the country, Manchester, Birmingham & Newcastle to name but three. Our direct neighbors, Wales and Scotland, both passionate sporting nations, contain the marvelous Millennium Stadium and the BT Murrayfield Stadium respectively.

So, it’s writers prerogative to announce that the UK demolishes the first issue of a new franchise – the Stadium. The first hurdle leapt. The country that gave the world The Beatles, James Bond, Romeo & Juliet and Jay Ajaji wants something back! America are you ready?