NFL news? We’ve got you covered! The following are the Grueling Truth’s top five stories from around the league for Thursday, August 10th.

1) DeShaun Watson outplays Tom Savage
DeShaun Watson was the big story of last night’s preseason games. Watson looked poised, made good decisions and was accurate in the Texans’ 27-17 loss to the Carolina Panthers.

When asked about Watson’s performance, Coach Bill O’Brien had this to say after the game: “First game out there I thought he did some big things. It is a big jump from college to the NFL. I thought he handled it pretty well. There are probably a couple of things that we could’ve done differently. He could’ve played a little bit better on certain plays, but overall I thought he handled himself pretty well for his first time out.”

Presumptive starter Tom Savage was efficient, going 9 of 11 for 69 yards in his time against Carolina’s starters, but Watson gives the Texans offense an added dimension with his ability to get out of the pocket. Watson’s mistakes came in over-throwing a couple receivers and maybe not standing in the pocket long enough a few times, but that is expected from a rookie in his first NFL action.

Watson vs Savage should be a very interesting competition for the next three weeks and, while it is only one preseason game, the Texans may have gotten a special player in Watson. 2) Kelvin Benjamin could be ready to have a big year
The Panthers are a team that desperately need playmakers and Kelvin Benjamin looked like he just might be that guy this year. Benjamin again resembled the receiver who took the league ny storm a few years back.

After concerns earlier in the year, Benjamin appears to be in shape, made one spectacular catch and ran solid routes the entire time he was in the game. If Benjamin lives up to his potential, Cam Newton could have a huge year this season.

3) Martavis Bryant is back for the Steelers
In order to gain full reinstatement for the regular season, NFL Network Insider Ian Rapoport reported that Martavis Bryant must continue to attend mandatory counseling sessions. If he can do that, he will be ready to go in week one and could make the Steelers the most explosive offense in the league. Bryant adds another weapon to a loaded offense and QB Ben Roethlisberger already has a ton of weapons at his disposal; with Bryant back aboard, the Steelers would pose a significant problem for anybody they play — including the New England Patriots.

4) Indianapolis is Tom Brady Territory! No, really.
The NFL Shop created a graphic on its website showing the best-selling jersey in each of the 50 states. No. 1  in Indiana is none other than Tom Brady’s Patriots jersey — no kidding. Brady’s is actually the leader in sales in 13 states in all.

5) Rams and Chargers Fight for L.A.!
A joint scrimmage between these two teams led to 3 fights on Wednesday afternoon. Round 1: Rams CB Trumaine Johnson and Chargers WR Dontrelle Inman were the first to get into it, with Rams CB Nickell Robey-Coleman and Chargers WR Keenan Allen joining in, they said, to protect their teammates as a melee ensued, “Where I’m from, if somebody’s going to initiate it, we’re going to finish it — especially myself,” Johnson said (via the Los Angeles Times).

“Emotions got a little high and I had to defend my teammate. That’s part of the code,” Robey-Coleman said.

Round 3: Gaines then got into an altercation with Chargers DE Chris McCain during a special-teams drill. 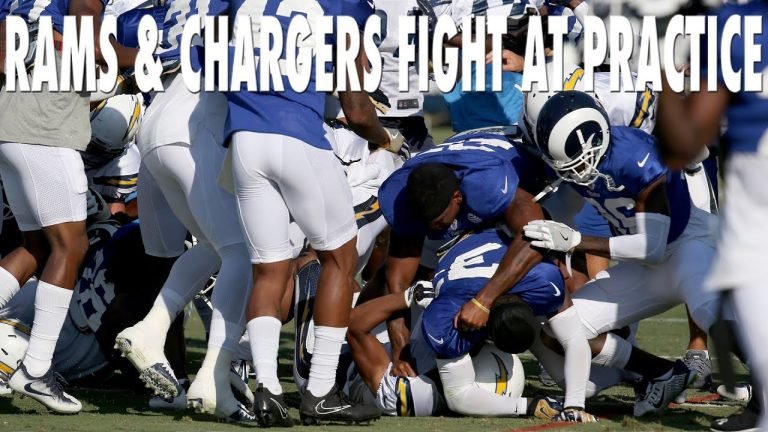 McCain and Gaines were kicked out of practice, according to their coaches. “At some point, you have to make an example out of somebody,” Chargers coach Anthony Lynn said, per ESPN. “We weren’t gonna fight all day.”

“Guys are great competitors,” Rams coach Sean McVay said. “We always want to be mindful and smart with this, about how we do this.”

The big question that stands out to me would be that we have two rookie coaches that are young, could this mean that they are having trouble controlling their teams?