ESPN analyst Mike Clay has made some bold and not so bold predictions for the Raiders 2018 season. In many cases the statistics from 2017 will improve.

Derek Carr is predicted to throw 12 interceptions versus 24 touchdown passes. He will also rack up over 4,000 yards passing. So, according to Clay the Derek Carr that fans are used to seeing will be back. Both Mack and Irvin will combine for 16 sacks and the Raiders starting secondary is looking to double the amount of interceptions that they got in 2017 from 4 to 8. Offensively Clay predicts that the Raiders scoring will increase by 51 points but the total number of points surrendered by the defense will only decrease by two points. The Raiders sack production is not pretty either. Oakland will finish the year 31 out of 32 teams in sacks with just 29. Last year the Raiders had 31 sacks. The surrender of over 370 points again and the lack of sack production would mean that all the changes the Raiders made in the draft and free agency will essentially amount to little or no gain. 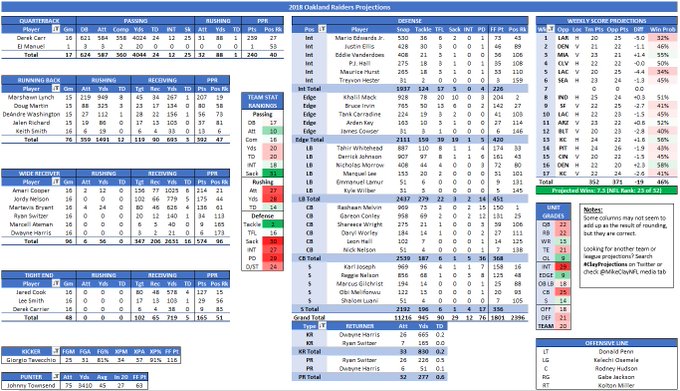 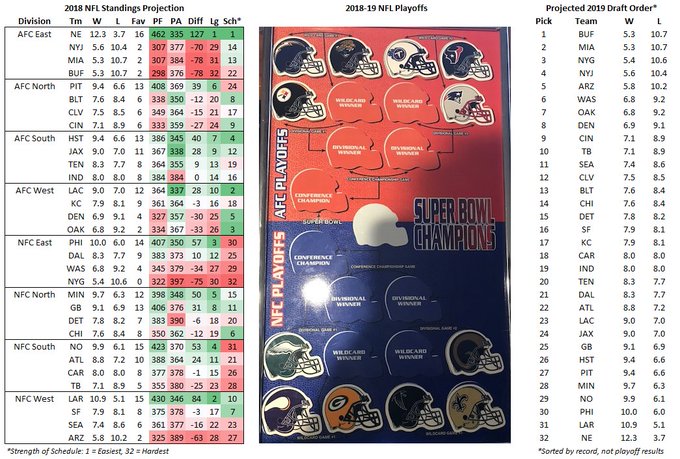 Despite all the changes, the firing of Del Rio, the hiring of Gruden, the Raiders draft picks and the Raiders signings in free agency will only amount to one more week of victory for Raider fans (Oakland was 6-10 last year).

It is easy for Clay to make these choices. Oakland has made a lot of changes and usually, a change at head coach usually leads to a small increase in wins. When Gruden took over the Raiders in 1998 the team was in a much worse situation. Oakland went 4-12 in 1997 and the “Gruden effect” lifted them to an 8-8 mark in 1998. In 1999 they repeated their record of 1998 and then in Gruden’s final years with the team they went 12-4 and 10-6 respectfully.

Personally, I think that 7-9 is too low of a number. I do agree that it is difficult for a team to get to ten wins after making this many wholesale changes. However, 8-8 or 9-7 seem to be the most plausible scenarios for me. If history repeats itself, the Oakland Raiders under Jon Gruden will be a competitive, hard-working, “never say die” team. This usually equates to close games, nail-biting games that will keep Raider fans on the edge of their seats. Games like that can go either way. For example, one turnover or a big return off a punt, a big penalty can completely change the course of a close game. Gruden’s teams will fight you until the the final second ticks off the clock and that might be the difference this season it putting them closer to 10-6 or 11-5.

As a fan base we just need to relax. The “experts” who have access to all kinds of statistical research and analysis will make their predictions. If they are correct they will pat themselves on the backs after the season. If they are wrong they will usually say nothing. As a fan base we know how that goes because we can all make predictions and in the end they mean nothing.

As they say, “that’s why they play the game” so we can see who are the contenders and who are the pretenders.