Miami Dolphins: Past Mistakes & the Future

Can the Dolphins wise up?

Don Shula coached Dolphins greats such as Bob Griese, Jim Kiick, Larry Little, Marry Fernandez, Nat Moore, Mercury Morris, Mark Clayton, Dick Anderson, Larry Csonka, Jim Langer, Mark Duper, Bob Kuechenberg, Paul Warfield, and Dan Marino. Shula spent his playing career for the Cleveland Browns from 1951-1952, Baltimore Colts 1953-1956, and finished his playing career with the Washington Redskins in 1957. Shula got his first coaching job in 1960 with the Detroit Lions as the defensive coordinator from 1960-1962 and got his first head coaching job with the Baltimore Colts from 1963-1969 with the Baltimore Colts before moving on to Miami in 1970.

After the family of the late Joe Robbie sold their share of the Miami Dolphins to Wayne Huizenga, his first mission was to retain the legend Don Shula after the 1995 season. Huizenga decided to bring in his coaching staff to South Florida, and it’s not that Jimmy Johnson was a bad hire or the worst coach for the Miami Dolphins it’s the fact that the management was ready for Dan Marino to retire and make Jay Fiedler the franchise quarterback of the Miami Dolphins. I believe that would have happened under Don Shula, but I guess as fans I probably would say after the 1995 season that after the Joe Robbie selling the Dolphins to Wayne Huizenga was the actual downfall of the Miami Dolphins even though there was not actually a losing season in the post-Shula-Marino era until 2004 the final season of the Dave Wannstedt era.

Personally, if you think about it, some Dolphins fans believe that the actual downfall came after the Dolphins suffered their worst loss in the franchise in the 1999 playoffs 62-7 to the Jacksonville Jaguars and shortly Dan Marino retired. After Marino retired Jay Fiedler took over as starting quarterback and the team remained talented as they also had a talented backfield with Ricky Williams and Lamar Smith, also the receiving corps was talented at the time. The defense was also solid and skilled with Jason Taylor, Zach Thomas, and former Florida Gator Channing Crowder.

After the Wannstedt era ended in the middle of the 2004 season, the Dolphins hired former LSU head coach Nick Saban, and he was coming off of a National Championship in the 2003 season with a victory over Oklahoma. Nick Saban only lasted two seasons in Miami and was not fired, but left Miami to take the head coaching job at Alabama, and the Dolphins would have to start all over again with a whole new head coaching search. The Dolphins would shortly turn to Cam Cameron, and that would make the Dolphins have second thoughts about the hire because the Dolphins only won one game during the 2007 season under Cameron. 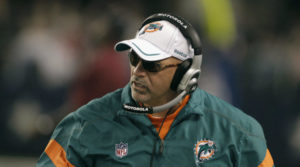 I do think if they decide to keep Ryan Tannehill, they can always draft an offensive lineman because there is never too many of those because you have to protect your quarterback and that has caused Tannehill’s problem with getting sacked, but the interceptions have been on him. I think if they were to move on from Tannehill and draft a quarterback, I think it should be Kyler Murray or if they sign a veteran quarterback, they should endorse Miami native Teddy Bridgewater. I feel as a fan and a writer whatever decision Chris Grier makes as a general manager there is always room for improvement, and I support the Dolphins no matter what.

Get your Free Bet now!
Latest News
The Top-15 Players in Cincinnati Bengals History
I am limiting this list to retired players ...
What If Mike Tyson Fought in the 1960s and 70s: Part 1 of 3
For this mythical series, we will use our ...
St. John’s vs Seton Hall: The Pirates get an ugly win!
The Seton Hall Pirates came out of this ...
Should the Reds Remove Pete Rose’s Statue?
A few years ago the Philadelphia Phillies canceled ...
The All-Time Cincinnati Bengals Team
This will be the first in a series ...
Betting Tips
Betting Tip: Phoenix Suns vs Golden State Warriors
Tip:
Over/Under
Odd:
1.29
Current Bonus:
100% up to $500