Mason Rudolph Gets No Suspension Via NFL’s Selective Discipline

It didn’t take the NFL long to make their decisions about punishment regarding the fight between Cleveland Brown’s Myles Garrett and Mason Rudolph, quarterback for the Pittsburgh Steelers.

Here is a breakdown of the consequences of the altercation, according to a statement released from the NFL: 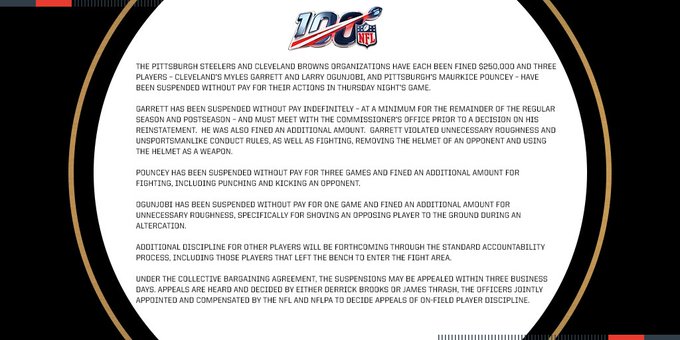 Did I miss a detail or two? Did the NFL forget that Mason Rudolph began the fight by trying to remove Garrett’s helmet? Did the officials not see the part of the fight where Steelers’ David DeCastro pulled Garrett back, and Rudolph continued to charge at Garrett? I believe they also failed to see Rudolph’s kicks to Garrett’s groin.

The fact that Mason Rudolph is not culpable (in the eyes of the NFL) for any part of the fight is exceptionally maddening. This is inexcusable on the part of the NFL.

So, as the media rips Garrett apart, Rudolph is painted a victim. To reiterate, I am not defending Myles Garrett’s actions. He was wrong. However, can the league at least pretend to have some level of shared responsibility here.

In a recent statement, Garrett acknowledges his irresponsibility and apologizes for his actions. He plans on learning from his mistakes and proving his true character moving forward.

What’s next with this, and when will it die? Since this is easy clickbait, I’m bracing to hear about this for a long while to come.

The fallout surrounding Myles Garrett’s suspension appears to have settled, albeit slightly. ...