So, fans, I have listened ad nauseum, to the local and national media draw and quarter Cleveland Browns’ quarterback Baker Mayfield, because he reacted to Tony Grossi’s baiting questions. Those who called Mayfield’s words and actions a temper tantrum should take a look at a real temper tantrum courtesy of Jermaine Whitehead.

As the Browns went to Denver with the hopes of taking down the Broncos and their inexperienced quarterback, I was hoping a different narrative would come out of Denver. I should have been more careful about what I wished for; we have a very different narrative now.

Not long after the Browns loss to the Broncos, Safety, Jermaine Whitehead, took to Twitter and in a series of profanity-laced Tweets peppered with threats (including death threats) and racial slurs answered those criticizing his poor play. 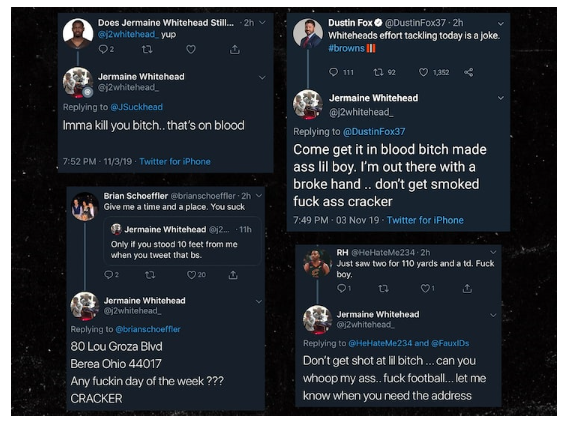 Whitehead, who played every snap against Denver, did not record a single tackle. Based on that fact alone, Whitehead should have expected criticism.

The Browns organization spoke out against the Tweets and cut Whitehead loose the following day.

We are too far into this season to be looking at such blatantly unrestrained actions from players. The organization and the players are spending too much time and energy addressing issues that should be well controlled. This should not be an issue. To be fair, neither should uniform violations, nor media-manufactured drama.

The actions of unruly or unthinking players are taking a toll on the organization. Weren’t the penalties and crap officiating enough? The Jermaine Whitehead debacle points to problems with the foundation of the franchise. We have some amazing talent in our locker room. Making talented individuals into a cohesive unit takes discipline and leadership. Overcoming deficits in these areas is critical to the team. I won’t pretend to have a handy three-point plan on how this happens. I do know that all of the talent in the world cannot win football games if it lacks strong leadership.

Baker Mayfield vs Tony Grossi: Where does this end?

Hey sports fans, Is everyone up to date with Cleveland Browns’ quarterback ...