A look back at Dolphins head coaches!

The Miami Dolphins have had 12 head coaches in the organizations history. Let’s take a look into all these coaches and I will share my thoughts as well on what I think led to their downfall in many cases.

George Wilson was the franchise’s very first head coach. Wilson coached the Dolphins from 1966-1969. He coached in 59 games posting a record of 15-39-2 with a winning percentage of .278. When you combing his lack of success and the opportunity Joe Robbie had to acquire one of the great young coaches at the time in Don Shula, Miami moved on from Wilson.

Don Shula came in after Wilson’s 3-year tender in Miami. Shula coached the Dolphins from 1970-1995. In his time in Miami, he coached the team to 2 Super Bowl Championships, 5 AFC Championships, and 11 AFC East Division titles. Shula posted an impressive 257-133-2 record in Miami with a winning percentage of .659 (328-156-6 with a .676% overall in his career.) While in Miami he went 17-14 in the playoffs and 2-3 in Super Bowls. Shula coached two of the best quarterbacks in Dolphins history as well in Bob Griese and Dan Marino. Shula is the best coach to ever step on the sidelines for this franchise and it isn’t even up for debate. Since he left Miami in 1995 the Dolphins have yet to find a coach like Shula.

Jimmy Johnson was the coach to follow the legend that was Don Shula. Johnson was the coach for the Dolphins from 1996-1999. Johnson last coached for the Cowboys in 1993 before coming to Miami. Johnson went 36-28 while in Miami with a playoff record of 2-3. Like myself, most fans may have thought Jimmy Johnson and the Dolphins should have been and match made in heaven. But unfortunately, the marriage only lasted 4 seasons. Was it due to the fact that he and Marino didn’t get along well or did he have a bad relationship with the front office? Marino often shoots down that narrative that he and JJ didn’t get along and says he and JJ did work well together. Whatever it was when you bring in a coach like Jimmy Johnson you expect better result and while JJ did have some success in Miami he never reached the ultimate goal. 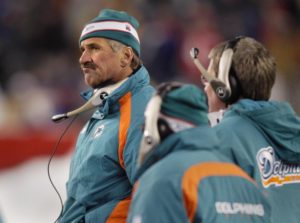 Dave Wannstedt took over when Johnson’s time was up in Miami. Wannstedt served as the team’s Assistant Head Coach before taking the head coaching spot. He posted a 42-31 record going 1-2 in the playoffs. Wannstedt in 2000 helped lead the Dolphins to there 1st division title since 1994. Dave is best known for his time in Miami for forcing Dan Marino into retirement by telling him he could return for another season but he would have to compete for his starting quarterback job. Wannstedt did win a lot of games but the lack of success on the offensive side of the ball during Dave’s time in South Florida came back to hurt him. The sudden retirement of Ricky Williams also doomed the 2004 season which was ultimately Dave’s downfall.  Dave resigned from his position in 2004 halfway through the season while the Dolphins were 1-8 at that point.

Jim Bates came in and took over for Wannstedt after he retired in 2004. Not much to say about Mr. Bates time with Miami because it was only 7 games. He did, however, go 3-4 and beat the Patriots so Dolphins fans will love him for that.

Nick Saban was the head coach in 2005-2006. Like most Dolphins fans I wish I could forget about the seasons Saban was the coach. Saban took over the Dolphins head coaching spot after leaving LSU to come back to the pro game. He went 15-17 in 32 games in Miami. His most famous line, while he was in Miami, was “I’m not going to be the Alabama coach.” Well, we all know how that ended. I believe that most fans still hold a grudge against Saban for the way he left Miami. I know I hold a grudge and probably always will. Saban leaving Miami and the way he did it ranks up there with Ricky Williams retiring in his prime! Enough time wasted on Saban let’s move on.

Cam Cameron coached Miami in 2007. His record was an atrocities 1-15. Maybe if he really would of drafted Ted Ginn’s whole family we may have had a better chance with him in Miami. In Cameron’s short time in Miami, the team started the season 0-13 before winning in overtime against Baltimore (Greg Camarillo Miami fans still love you for that win)! Like the previous coach, Cameron was a dark spot in Miami Dolphins coaching history.

Tony Sparano was the coach between 2008-2011. Sparano went 29-32 in his time in Miami he also went 0-1 in the playoffs. While Sparano was an immediate hit in year one he fizzled out shortly there after. His time in Miami was spent being super excited for the team making field goals and introducing the world to the wildcat. Sparano also brought Miami a division title in 2008 and it was the first time the team captured that since 2000. Sparano ultimately was replaced by Tod Bowles in 2011.

Joe Philbin was the head coach from 2012-2015. Before becoming the head coach of the Dolphins Philbin was the offensive coordinator for Green Bay Packers. Philbin was 24-28 as a head coach in Miami. It’s no secret that Philbin was not a fan favorite in Miami. Whether it was due to his lack of commitment to the run game or his lack of passion on the sideline he just couldn’t win over the Dolphins fan-base. Philban was loyal to a fault and that may of cost him his only head coaching gig in the NFL. Sometimes you just gotta fire or bench someone if things aren’t working out. Also, in the NFL the head coach must be a leader of men and Joe Philbin lacked greatly in that area. Philbin showed little to no emotion and his leadership skills were lacking. Philbin was ultimately fired in 2015 being replaced by then tightens coach Dan Campbell. 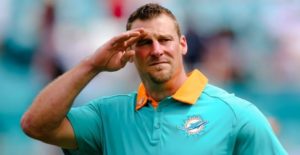 Dan Campbell took over for Philbin when he was fired. Campbell led the team to a 5-7 record in his 12 games as head coach. Some fans weren’t happy when the interim tag was taking off Campbell at the end of the season and he was forced to interview for the job he had been doing as head coach. Some people thought Campbell did enough to be the next head coach of the Dolphins. I for one didn’t agree. He can give great victory speeches and get the team amped up for games but how much of that was him and how much of that was Philbin being gone? Campbell wasn’t offered a head coaching spot by any team that year either so that tells you what other NFL teams thought about him. His time may come one day just not right now.

Adam Gase was hired in 2016 to be the next head coach. He currently has a 16-16 record in 2 years. Gase took the team to a 10-6 record in year 1 and a playoff loss to the Pittsburgh Steelers. Would of that game been different if Miami had it’s starting qb? I guess we will never know at this point. Gase’s second year was a little less successful going 6-10. Gase was also without his starting qb the whole 2017 season. Also at the end of season two, the Dolphins roster had a lot of turnover. What will year 3 bring for Gase and the new look Dolphins? Gase has finally been able to put his fingerprint on this team and bring in the players he wants. Will year 3 bring another playoff year? Only time will tell what this new look team can do.