Five Vikings poised for a breakout season in 2017

5 Vikings poised for a break out season

When a team like the Vikings attempts to turn the corner after a disappointing season, many adjustments must be made. I know what most fans are thinking, “they would have been just fine had they stayed healthy.” Whether that is true or not can never be proven. However, what can be proven is how positive of an adjustment the players make from 2016 to 2017

We all know which players stepped up for the Vikings in big ways in 2016. Adam Thielen, Xavier Rhodes, Kyle Rudolph and even Sam Bradford stood out from the other guys in purple. Cordarrelle Patterson, Captain Munnerlyn and Adrian Peterson have now moved on to different teams. Their departure creates opportunities for other players to make their mark in the NFL.

Although rookies qualify as potential breakout stars, this list does not contain any. 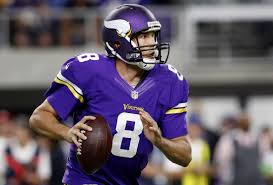 I know, I know, he had one of his best seasons last year and actually set the single-season completion percentage record. That being said, he did only have seven wins; a bigger season from Bradford would hopefully translate into more wins for the Vikings. Bradford will also welcome a (hopefully) healthy offensive line to a full training camp and preseason regimen he missed out on last season. Barring injuries, the Vikings’ offense should be humming a different tune than they were at the end of 2016. Even Bucky Brooks of NFL.com agrees that Bradford should be on this list but he goes into much more detail as to why. 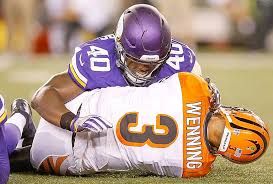 Most breakout performances come from an opportunity; that is exactly what Brothers has due to Chad Greenway’s retirement. Brothers participated mostly as a special teamer in 2016. In order for Brothers to become a starter, he will have to fend off Emmanuel Lamur and rookies, Ben Gedeon and Elijah Lee. Brothers’ football IQ and quickness from sideline-to-sideline make him the front-runner to replace Greenway.

For the second-straight year, Waynes finds himself on this list. Either he turns into an every-down player or the Vikings’ coaches will start to believe the fans, who feel Waynes was a wasted 11th-overall selection. The young corner did show glimpses of what he is capable of to seal a victory against the Packers in 2016. If Waynes can get over his tendency to grab and hold receivers, he and the team may be in for a big year in 2017. 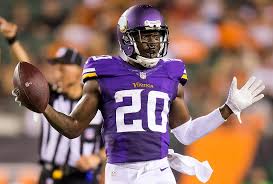 Another player with the chance to prove themselves due to a departing teammate, Alexander may be the Vikings’ next nickel corner. The limited playing time from Alexander showed how inept he was when covering NFL receivers in 2016. If Alexander wants to prove this list correct, his footwork and mental toughness need to take a gigantic leap forward. 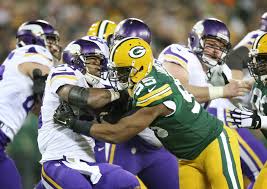 Nobody quite knows what is going on with Sharrif Floyd these days. Is he hurt? Is he in the doghouse? The answer may be yes to both of these questions; either way, it may be time to move on. Jones may be in a rotation with Tom Johnson and rookie Jaleel Johnson according to Ben Goessling of ESPN. Jones’ production of 73 tackles and nine sacks came during a four-year Packers’ career in which he only started seven games. If he receives extra looks at defensive tackle in a 4-3 base defense, Jones could thrive while surrounded by talented pass-rushers in purple.

Given the ineptitude of the offense in 2016, many players will need to step up on that side of the ball. However, the defense performed just as poorly down the stretch in 2016. If the Vikings plan to become NFC North Champions in 2017, the listed five players and many others will need a breakout season.

Justin Ekstrom is the Vikings’ beat writer for The Grueling Truth. Feel free to send complaints and god-forbid any positive feedback on Twitter @thesportscrib21.