The Grueling Truth - Where Legends Speak / NFL / Why are We (Still) Talking About Emily Mayfield?

Why are We (Still) Talking About Emily Mayfield?

Here in Cleveland, we are a few days removed from a win at home, with a game against the Pittsburgh Steelers looming just ahead of us. So many interesting narratives could be coming out of Berea. However, the story I keep hearing shouldn’t even be a story, and I’m here to try and put it to rest.

I am speaking of Emily Mayfield, and the backlash hurled at her over recent comments. After the Browns victory over the Buffalo Bills, many of the fans (and I use the term loosely) who were screaming for Baker Mayfield’s head on a plate a scant few weeks ago, want to be all in again.

Mrs. Mayfield posted a mild comment about the phenomenon on her Instagram story. “Fair-weather fans are HILARIOUS to me. Get out of here lolllll”

As social media posts go, this appears to be a possible 0.5 on the Richter scale. Seriously, compare it to the Jermaine Whitehead social media explosion. It’s not even close.

Alas, the more delicate of the fair-weather fan species took great offense to Emily Mayfield’s tiny jab. The seasonally faithful were so taken aback by Emily’s comment, that she went back to Instagram to clarify her comments.

Unfortunately, the Instagram post did not pacify the offended fans. Perhaps, calling the sensitive group ‘idiots’ was not the best term for clarification. *SIGH* 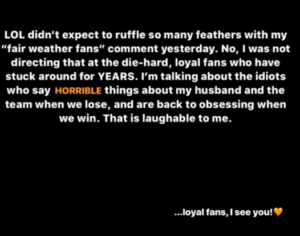 This story ahead of one of the biggest games of the season, is another in a series of misguided and misdirected distractions.

The team is piecing together a house of cards. The season has predictably not lived up to the pre-season hype. Every real fan knew the hype was just for fun and to sell tickets and merch. The group who latched on to the bumper of the bandwagon bought in and are now somehow amazed at the win-loss column. Additionally, they are offended that a young wife took to social media to defend her husband.

I’d like to offer a suggestion… grow the hell up. If you are that fragile, find a pastime that can shield you from the reality of NFL football as well as the quarterback’s wife.

Not all superheroes wear capes, but Seniesa ‘SuperBad’ Estrada does. In a ...

Get your Free Bet now!
Latest News
Robert Saleh Has Faith In Joe Flacco, for now
The New York Jets received some good news ...
A case can be made for Joe Gibbs as the Greatest Coach in NFL history
The GOAT Many great coaches have played a ...
Carl Nassib signed by the Tampa Bay Buccaneers
After being released by the Raiders in March ...
Woodward out as the Manager of the Texas Rangers
On Monday, the Texas Rangers fired Chris Woodward ...
Top 5 Hardest Punchers in Light Heavyweight History
Top 5 Today we take a look at ...
Sports Betting Deposit Methods
Best Sports Odds
Betting Tips
Betting Tip: Cleveland Guardians vs Detroit Tigers
Tip:
Total Hits
Odd:
1.86
Current Bonus:
Bet $1, Get $200