The Grueling Truth - Where Legends Speak / Pro Football / NFL / The 6 Most underrated Linebackers in the NFL since 1970!

The 6 Most underrated Linebackers in the NFL since 1970!

A lot of great linebackers have gotten overlooked in the history of the NFL; today let’s look at six who do not get enough credit for being great players. These are in no particular order.

Standing only 5’9″ coming out of Montclair State, Mills was thought by head coaches to be too small to play in the NFL. So he hooked on with Coach Jim Mora of the Philadelphia/Baltimore Stars. From there, as they say, the rest is history.

Mills was a standout linebacker for a Stars team that made it to three straight USFL title games, winning two.

Jim Mora after the 1985 season signed on to coach the lowly New Orleans Saints and Mills followed his mentor. During his time with the Saints, starting in 1986, Mills was an anchor of the defense and the team as a whole. He was a member of the vaunted “Dome Patrol,” considered one of the greatest linebacking corps in history. They helped lead the Saints to their first playoff appearance in 1987 and then again in ’90, ’91 and ’92. Mills earned four Pro Bowl appearances with the Saints in 1987, ’88, ’91 and ’92. Mora, who coached 15 seasons in the NFL, called Mills “The best player I ever coached.”

Mills left for the expansion Carolina Panthers in 1995, where he would play for three years, and helped lead the young team to the NFC Championship game in 1996. Mills tragically passed away way to early in 2005 due to cancer. Sam Mills may have been small in stature, but he had a heart that would not quit. 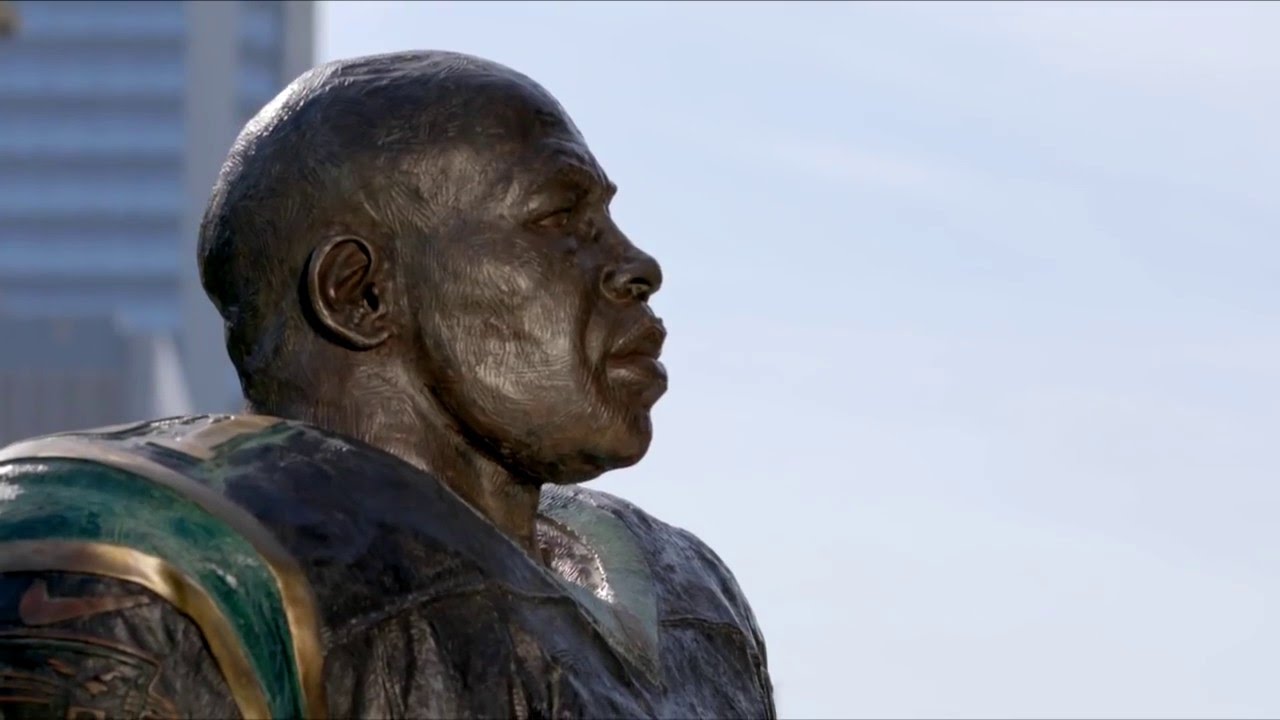 Reggie Williams is a man who has probably achieved more off the field than he did in his career. Do not get me wrong: His playing career was spectacular.

Williams was not highly recruited out of high school, which, looking back, may have been the best thing to happen to him. Instead of ending up at Michigan, he ended up at Dartmouth, where he had an outstanding career. That distinguished career led Williams to be drafted in the third round of the 1976 NFL draft by the Cincinnati Bengals.

As a Bengal, Williams was a leader of the defense from early on in his career; during his time with the Bengals, Williams helped lead the Bengals to their only two Super Bowl appearances.

Williams in his career recorded 16 interceptions and 23 fumble recoveries (a franchise record). Williams also amassed 62.5 sacks, which is still the second most in Bengals history. In his final two seasons with the Bengals, Williams was appointed to an open seat on the Cincinnati City Council in 1988 and Williams was elected to a second term in 1989 on the Charter Party ticket.

Williams has received numerous honors, including selection to the NFL All-Rookie Team (1976), the Byron “Whizzer” White Award for Humanitarian Service (1985), the NFL Walter Payton Man of the Year Award (1986), and Sports Illustrated’s Co-Sportsman of the Year (1987).

After his career ended, Williams oversaw the creation of Disney’s Wide World of Sports Complex, a state-of-the-art 220-acre multi-sport facility that opened on March 28, 1997, and hosts more than 180 athletic events annually in some 30 sports. By 1998, he was named Vice President of Disney Sports Attractions, overseeing a newly created sports & recreation division that merged Walt Disney World Resort Recreation, Water Parks and Disney Sports Attractions, which included Disney’s Wide World of Sports Complex, the Walt Disney World Speedway, and Walt Disney World Golf. Williams retired from Disney in November 2007, stepping down to focus on rehabilitating his legs from his playing career in the NFL.

Banks was an often overlooked member of “the Big Blue Wrecking Crew,” which included Lawrence Taylor who got most of the attention. There is a case to be made that, during playoff and Super Bowl time, Carl Banks was the best defensive player that the Giants had. Banks was a standout in their Super Bowl XXI victory in which he recorded 14 total tackles, including ten solo. Commentator John Madden during the game commented that “Banks is the best player on the field today” — high praise from Madden, a Hall of Fame coach.

Carl Banks does not get the respect he deserves, mainly for two reasons. Number one, he played opposite of Lawrence Taylor; number two, his career was shorter than most great players. If you don’t believe me watch Super Bowl XXI and when you are done watching the game, you’ll know just how great Carl Banks was. On the biggest stage, the Super Bowl, Banks played one of the greatest games any linebacker has ever played.

Matt Blair was one of the greatest linebackers ever to play in the NFL. Blair is often overlooked because he was a quiet humble man who doesn’t feel the need to tell you how great he was.

Blair quickly established himself as one of the best linebackers in the NFC, earning Pro Bowl honors for six consecutive seasons (1977–1982) and making the NFL All-Rookie Team. Also, Blair was selected All-Pro in 1980, All-NFC in 1978 and second team All-NFC in 1977, 1979 and 1981. Blair was also one of the greatest special teams players in NFL history, particularly in blocking punts because of his great speed and timing abilities. Blair is still third all-time in the NFL history with 20 blocked kicks.

The thing that separated Blair from most at his position was his incredible speed; he was as good as any linebacker who ever played when it came to pass coverage. Because of his exceptional ability at linebacker, he was named to six Pro-bowl teams before his career was over.

Isaiah Robertson made an immediate impact on the NFL in 1971. Robertson was drafted by the Los Angeles Rams as the 10th pick in the first round of the 1971 NFL draft. He replaced a great player in Jack Pardee. He was voted Defensive Rookie of the Year, selected Second-team All-NFL and also chosen to the Pro Bowl.

By 1973, Robertson was considered one of the best linebackers in the game and was voted first-team All-Pro. It was one of the best seasons of a great career. He picked off three passes that season and returned one interception 49 yards for a touchdown against the New York Giants on Monday Night Football. In all, Robertson was a six-time pro bowler in his career and, like Blair, was unusually fast for a linebacker.

He left the Rams after the 1978 season and went to the Buffalo Bills. I don’t think it is any coincidence that once Robertson was a part of the defense, the Bills become a playoff team in 1980 and ’81. 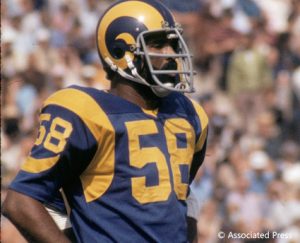 Kirkland was a massive linebacker, standing 6’1″ with weight ranging between 270-300 pounds. He became a starter at inside linebacker for the Steelers in just his second season, 1993, replacing Pro Bowler David Little. By 1995, Kirkland was recognized as one of the best inside linebackers in the league and had a memorable performance in Super Bowl XXX against the vaunted Dallas Cowboys. In that game, the Steelers defense played exceptionally well as they held the Cowboys to just 15 first downs and Emmitt Smith and the Cowboys powerful running attack to just 56 yards, despite losing 27-17. Kirkland had ten tackles and a key sack of Dallas quarterback Troy Aikman.

I don’t know why Kirkland doesn’t get the respect by some that he should. Maybe it was the size, but people forget that he was great in pass coverage and did everything exceptionally well. Kirkland was respected by his peers as Kirkland was selected to the NFL’s All-Decade Team for the 1990s.

The 1988 Cincinnati Bengals: Kings of the Jungle!

No matter what team you cheer for, there is always that one ...

Get your Free Bet now!
Latest News
12 Grueling Truth’s we learned during Wildcard Weekend
Click below to find the top sites to ...
The 1969 Kansas City Chiefs: History’s most overlooked team
The 1969 Kansas City Chiefs are probably the ...
Alex Ramos: The epitome of a fighter
I have wanted to write an article about ...
Ty’s Take on the First Bengals Playoff Game
The Cincinnati Bengals defeated the Las Vegas Raiders ...
The Top 13 NFL Wide Receivers of the 1970s
13) Mel Gray Mel Gray and Issac Curtis ...
Betting Tips
Betting Tip: Sacramento Kings vs Los Angeles Lakers
Tip:
Home/Away: Home
Odd:
2.32
Current Bonus:
100% up to $500