6 Defensive Sleepers to Watch for in the 2018 NFL Draft

With the media circus that surrounds college football and the NFL Draft process, there is always a hand full of people who seem to get lost in the shuffle. These six players have not been talked about as much as many other prospects but could have a huge impact on defense in the NFL.

If a team covets Denzel Ward or Jaire Alexander in this draft, but just isn’t in a position to get either of them Chris Campbell could be the man they are looking for.  Campbell has been a contributor for the Nittany Lions for the past four seasons and started for the last two. He has excellent speed and is very patient as a man defender. He uses good technique and understands how to squeeze a fade on the sideline. Campbell is also impressive in a zone. He makes excellent reads and breaks on the ball with speed. Campbell has the skill set to be a quality starting corner in the NFL. The Texas-San Antonio Roadrunners football team is getting a lot of buzz in the NFL 2018 draft due to edge player Marcus Davenport, but there is player in their secondary who also warrants NFL attention. Devron Davis is a highly skilled cornerback who is equally effective as an outside corner or as a nickel. At 6’ Davis has decent size and excellent smooth hips. He has the speed to run with just about anyone in the NFL and the confidence to lock them down. Davis is a competitor who checks all the boxes for an NFL corner. Davis would be a great fit for any team looking for a man corner.

Olasunkanami Adeniyi is a fierce edge rusher. He has excellent speed and the agility to counter his original rush. He has the flexibility to bend off the edge to get to the passer. He is not someone who tries to win on his speed and burst alone. His hands are lightning fast and he uses pass rush moves effectively. 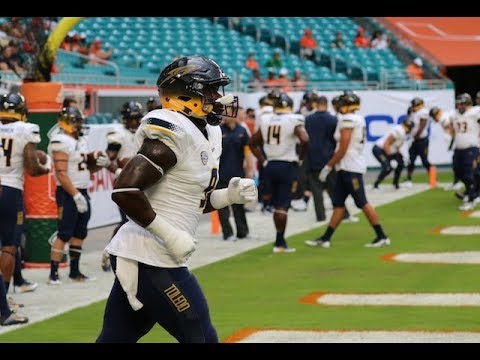 At 6’2” 244 Ja’von Rolland-Jones is a bit undersized for an edge rusher, but at Arkansas State he was a monster who destroyed people. Rolland-Jones is well developed as a pass rusher and utilizes a wide array of moves and counter moves. He has a knack for creating plays in the form of sacks and fumbles. His size makes him a bit of a liability against the run to his side in the NFL and a concerning matchup against NFL offensive tackles on passing downs. For this reason, he needs a coach who is creative enough to play to his strengths. It is hard to believe that there could have been a sleeper playing in the same secondary as Marshon Lattimore, Gareon Conley, Malik Hooker, and Denzel Ward over the last two seasons.  Damon Webb was a productive member of the Buckeyes’ defensive backfield who lacks ideal speed but seems to have a knack for making plays. He is an extremely smart and well-coached player who, despite his physical limitations should be able to find a role in the NFL.

Nathan Bazata is not a huge prospect at 6’2” 287, but he is very strong and does a great job stuffing the run. Bazata has a skill for disengaging from blocks and making stops. He has been a consistent contributor for the Hawkeyes over the last three seasons and had 51 tackles as a senior. He has shown some ability to rush the passer but will have the largest NFL impact as a run stopper. Evaluating the Pro Football Hall of Fame Class of 2019 Nominees

The Pro Football Hall of Fame based out of Canton, Ohio, recently ...