Ted Ginn burned the New York Jets for a pair of 100-plus yard touchdowns 10 years ago today.

Totaling just 104 yards of offense in a rivalry game isn’t going to result in success on most levels of football. On this day a decade ago, the Miami Dolphins were able to accomplish the feat in a 30-25 win over the New York Jets.

The biggest reason for Miami’s success? Kickoff returner Ted Ginn, Jr. Ginn became the first player since 1967 to return a pair of kickoffs for a touchdown in the same game.

The Dolphins had defeated the Jets in a Monday night thriller less than a month earlier, but were just 2-4 when they arrived in the Meadowlands on Nov. 1, 2009. The Jets were 4-3.

The first half saw the teams just exchange a pair of field goals as Miami and New York went to the locker room tied at 3 apiece. After Jay Feely’s 55-yard field goal gave the Jets a 6-3 lead, Ginn scored Miami’s first touchdown of the day on a 100-yard kickoff return for a score. Ginn made a cut to the right before outrunning defenders down the sideline to put the Dolphins in front, 10-6.

The Jets marched into Miami territory on their ensuing drive, but the Dolphins were able to increase their lead — again without being on offense. Following a Shonn Greene fumble, Miami defensive end Jason Taylor scooped it up and ran 49 yards for the touchdown.

After a Mark Sanchez touchdown run four minutes later cut the lead to 17-13, the Jets again made the mistake of kicking the ball to Ginn. From a yard deep in the end zone, Ginn’s second touchdown would be even more electrifying. Ginn broke a tackle inside his own 15-yard-line before an excellent cutback on his way to a 101-yard touchdown. 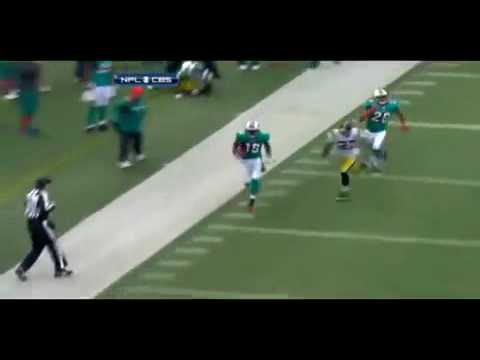 Down 24-13, the Jets would answer as Sanchez found Braylon Edwards for a 19-yard touchdown late in the third quarter. Miami responded with its only offensive touchdown march of the day as it went 67 yards in 13 plays for a touchdown as quarterback Chad Henne capped the drive with a 5-yard touchdown pass to Joey Haynos.

Sanchez’s third total touchdown of the day — a 16-yard scoring strike to Dustin Keller — cut the lead to 30-25 with less than six minutes to go in the game. Following a 3-and-out, New York would get the ball back and march inside the Dolphins’ 10-yard-line. After Randy Starks sacked Sanchez on a key third down, Miami knocked away a fourth-down pass with just over a minute left to secure the victory.

Miami finished with just 52 yards passing and just 52 yards rushing in the win. Sanchez passed for 265 yards while running back Thomas Jones rushed for 102 yards in the loss.