The Miami Dolphins and New York Jets have played some memorable games over the years, including a few on Monday Night Football. The most notable of those might be the Jets’ 2000 comeback win in the Miracle in the “Miracle at the Meadowlands”, but it was the Dolphins who got the last laugh in a Monday night thriller on this day a decade ago.

What was a defensive struggle through three quarters turned into a shootout in the final period as the lead changed five times. When all was said and done, Ronnie Brown’s 2-yard touchdown run with six seconds to play was the difference as Miami prevailed at home, 31-27.

After an 0-3 start, the Dolphins had just earned their first win as they got set to host the 3-1 Jets on Oct. 12, 2009. Miami had twice taken the lead in the fourth quarter, but with more than five minutes remaining in the contest, Thomas Jones’ 3-yard touchdown run had given the Jets a 27-24 lead.

The final drive saw the Dolphins take 12 plays and melt 5:08 off the clock. The Dolphins converted two third downs on the march with both going through the air on passes from quarterback Chad Henne to wide receiver Greg Camarillo. The final was a 12-yard hook-up on a 3rd-and-10 from the Jets’ 16-yard-line.

With less than a minute to play and the Dolphins four yards from paydirt, Brown took a pair of direct snaps from Miami’s “wildcat” formation. After getting half the distance on the first carry, the second ended in the end zone and broke the visitors’ from New York’s collective backs.

Brown finished the night with a game-high 74 yards rushing and two touchdowns, including a 1-yard scamper on the game’s opening drive. The Jets would answer with a short touchdown pass from Mark Sanchez to Braylon Edwards and take a 13-10 lead into the locker room, thanks to a pair of Jay Feely field goals.

After a scoreless third quarter, Miami regained the lead less than a minute into the final period when Henne found tight end Anthony Fasano for a 2-yard score. Following Jones’ first of two fourth-quarter touchdown runs two minutes later, Henne and Ted Ginn Jr. hooked up on a 53-yard touchdown to put Miami in front 24-20 with more than 10 minutes to play in the game. 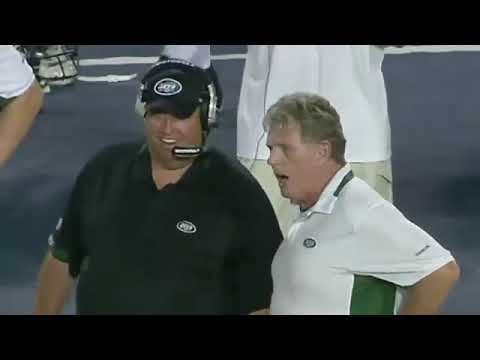 The Dolphins and Jets have met just once on Monday Night Football since — a 16-13 win for Miami in the Meadowlands in 2014. The last Monday night contest between the teams in Miami, however, was a thriller and it took place on this day 10 years ago.