NFL news? We’ve got you covered! The following are the Grueling Truth’s top stories from around the league for Tuesday, August 22nd.

Briean Boddy-Calhoun Boddy-Calhoun played football on Monday night and Twitter blew up! Calhoun hit Odell Beckham low after Beckham caught the ball and no matter how anyone tries to spin it, this was not a dirty hit.

“I cannot have a teammate next to me playing that way,” Collins said, per the New York Daily News. “I cannot condone it. It’s not something I seek. He had all the opportunity in the world to make a different play.”

Added Collins, “The play wasn’t a penalty, but it’s something everyone knows […] you don’t do. He had about 30 seconds to make a play on the ball in the air. He could’ve made a play on the ball, could’ve hit him high, but he chose a different route. I can’t respect him.”

Calhoun made a football play and football is a violent game, Collins needs to chill out, what Calhoun did was nowhere near dirty. 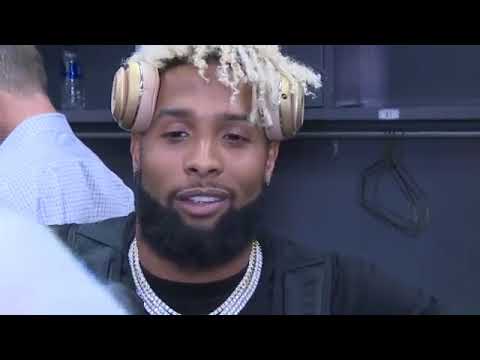 2) Could the Browns contend in the AFC North?

Not yet – They have too many questions on offense, but the defense may help them to a 6- or 7-win season in 2017. The Browns are loaded with young talent that looks ready to play in the NFL right now. They will shock some people this year and may just be a year away from serious contention.

Early results from the preseason show that the Giants could have a major problem on the offensive line, especially at left tackle. Rookie Myles Garrett had his way with the Giants’ Ereck Flowers on Monday night and there looks to be nobody else on the Giants roster that could take the spot from him.

Will this hurt the NFL TV ratings? Maybe, but the NFL continues to allow it so I feel the players have the right to protest. In the end, I could really care less who stands and who doesn’t; I watch the NFL to forget about daily life, not to be reminded about it. Football and politics should never mix: One is filled with lying, cheating, crooks and the other is sports.

[Sassy_Social_Share]
Previous article
« Change is Good: Why the CFL Must Adopt a One-Division Format
Next article
Halfway through the Oakland Raiders’ Preseason and We’ve Learned So Much »

Get your Free Bet now!
Latest News
Top 19 Heavyweights of all time
Top 20 Everybody has differing opinions on almost ...
Top 11 Dynasties in NFL History
(Photo Courtesy of Boston Sports Desk) “Dynasty” what ...
NFL Week 3 49ers vs Broncos: Odds, Tips and Predictions 9/25/22
Odds for 49ers/Broncos– 9/25/22 49ers/Broncos How To Watch ...
Lions lineup: Jackson, Cominsky sidelined, others uncertain for Sunday
On Sunday, the Detroit Lions will play the ...
Bingo Treasures to launch, partnering with Jamul Casino
On September 23, Video King announced that Bingo ...
Our Latest YouTube Videos