The Landmark Christian Eagles goal this year was to make the Conference playoffs. Instead, the little team that could made it all the way to the NHFA national championship game. The NHFA stands for the National Home School Football association and includes all homeschool varsity football teams from across the nation. The Eagles had never made it to the rarified air of the National Championships – held in Atlanta, Georgia this past weekend.

Though it ended in a 21-0 championship game loss to the number one ranked Christ Prep Academy, it was a season that the players and fans of Landmark Christian will never forget.

The Eagles had been close a couple of times over the past decade of making it to the final four of the NHFA Championships but had come up short on both occasions.  The Eagles needed to win the Great Lakes Conference Championship to have a shot at the final four. They opened up with a semi-final win over the Noblesville Lions 43-14. The Eagles trailed early 8-7, but came back to blitz the Lions with an onslaught of 29 points in the last six minutes of the second quarter. The win guaranteed them a place in the Conference Championship game.

This is where the underdog story started to come alive.

The Eagles next faced the fifth-ranked team in the nation the Osceola Grace Eagles. Nobody outside of the Landmark Family thought they had a chance. Early on it looked like the Eagles season would be coming to a painful end. Towards the end of the first quarter, the Eagles started to soar behind a dominant offensive line comprised of center Nathan Miller, guards Grant Goodpaster and Kyle Kennedy, and tackles Elijah Kearns and Ben Fallat who paved the way for a dominant run game led by Nate Moore (200 yards). Quarterback Austin Goodpaster picked the Eagles defense apart throwing for over 200 yards and two touchdowns. Eagles receivers Elisha Moore, Jacob Carroll, and John Hatfield caught everything thrown their way.

The Eagles were led by a high-energy dominating defense who shut out an Osceola Eagles offense for the final three-quarters of the game. Eagles linebackers Elijah Gwynn, John Hatfield, and Tae Young all made huge plays to help the Eagles to victory. Defensive ends Jacob Carroll, and Ethan Lamoreaux helped to contain Osceola’s speedy quarterback. The defensive backfield was led as always by the Brothers Moore, Nate and Elisha, who dominated on both sides of the ball, and cornerbacks Eric Nephew and Caleb Rumping.

When all was said and done, the Eagles had shown all the people who had doubted them that they were dead wrong, winning the conference championship game by the score of 35-12  With the win the Eagles received an invite as the number three seed to play for the NHFA National Championship. The only problem was that they would have to face the Noah Jaguars who are consistently one of the top homeschool programs in the country. The task may have been difficult, but these Eagles were out to show the whole world what they were all about. 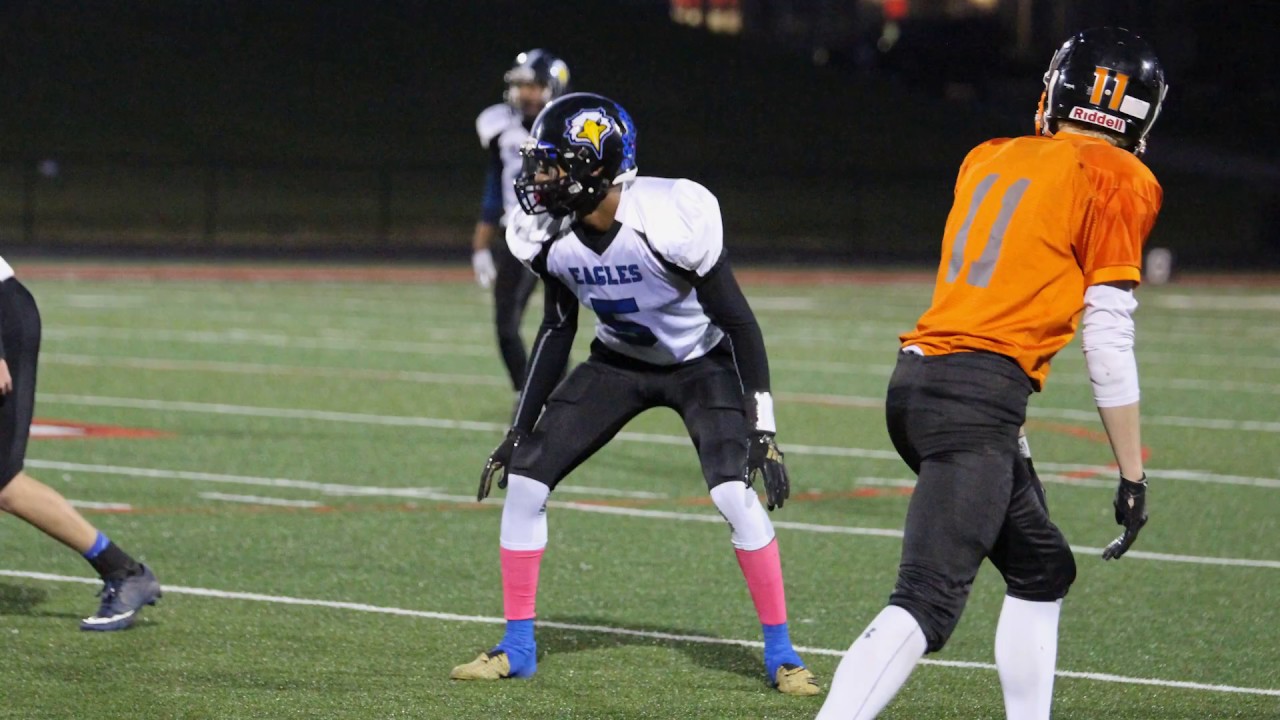 The Eagles national semi-final game was played on Thursday against the aforementioned Noah Jaguars. The Jaguars are a high-powered passing team that was expected to have little problem with the up and coming Eagles. Landmark Christian drew first blood with a long touchdown run by Nate Moore, but the Jaguars responded quickly with a TD drive of their own to tie the game at seven. A defensive battle ensued as both teams battled on even terms.

With a little over ten minutes left in the game, quarterback Austin Goodpaster threw a screen pass to fullback Harley Elsbury – who rumbled 65 yards for the go-ahead score. The Eagles won the game with great special teams plays and a bend-but-don’t-break defense. Punter Ethan Lamoreaux pinned the Jaguars deep and the Eagle’s defense went to work. On a huge third and long, the Jaguars quarterback threw a pass that was intercepted by safety Austin Goodpaster.

The final nail in the coffin came with a 1:47 left in the game. On third and one, Elsbury ran behind center Miller, guard Goodpaster, and tackle Kearns for the first down that sewed up the victory.

The Eagles improbable run had taken them to a National Championship matchup with the number one team in the nation, the Christ Prep Patriots. Did the Eagles have enough left in the tank to pull off the upset of all upsets? 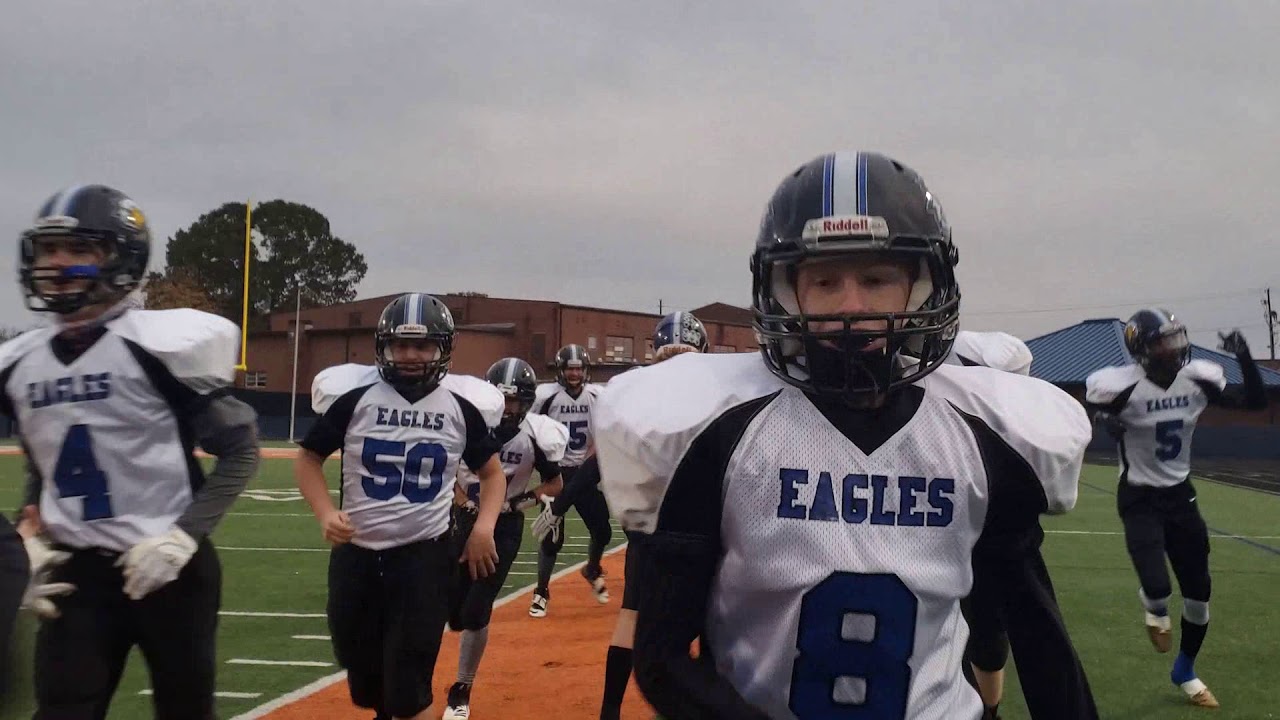 The heavily favored Christ Prep Patriots jumped out to a quick 7-0 lead over the Eagles.  The Eagles run game, which had been excellent all year, was shut down by a powerful Patriot defensive line. The Eagles offense perked up when quarterback Goodpaster threw the ball, but that success came to a painful halt when Goodpaster sustained a blow to the head, knocking him out of the game with a concussion. The Landmark defense contained the Patriots offense for the rest of the half, but by this point, it had become clear the time was running out.

The Eagles played as hard as they could, but with their starting quarterback out of the game and backup quarterback John Hatfield getting injured as well, the circumstances were too much to overcome. Elisha Moore filled in admirably in the second half but it was not enough as the Eagles finally succumbed 21-0.

The Eagles magical run to a National Championship game will never be forgotten by the players, coaches, and fans who were a part of it. The Landmark Eagles are a special group of young men, and in the end that is the most important thing to remember about this team.

What makes this story even better was that the team who won the National Championship, the Christ Prep Patriots, as well, were also a great group of young men as well, who deserve to be champions.