Joe Delaney was born  on October 30, 1958, and attended Haughton High School in Bossier Parish in northwestern Louisiana. Discouraged by his father from pursuing his dreams of playing football, Delaney became the starting wide receiver by his junior year at Haughton. Major Division I schools that scouted him included Grambling State, Texas, Oklahoma and Louisiana State.

Delaney ended up playing for Division I-AA’s Northwestern State Demons from 1977 to 1980. After telling his coach of his willingness to do anything to play football at the collegiate level, Delaney switched to the running back position. He went on to be an All-American selection in 1979 and 1980. While at Northwestern State, Delaney met his future wife, Carolyn, and they had two children by his senior year.

On October 28, 1978, Delaney carried the ball 28 times and gained 299 yards for Northwestern State against Nicholls State University with 263 of the yards coming in the game’s second half. Delaney’s rushing stats in the second half of the game are still an NCAA record. In the same game, he scored four touchdowns, one of which was on a 90-yard run, as he led his team to a 28–18 victory.

Delaney finished his career at Northwestern State with 3,047 yards rushing, 31 touchdowns, and 188 points. In 1980, his senior season, he was ranked eighth in the nation in all-purpose rushing yards. On November 22, 1980 he played his last game at Northwestern State and the school retired his jersey, number 44, at halftime. Delaney was elected to the College Football Hall of Fame in 1997.

At Northwestern State, Delaney also starred in track. In high school, he ran the 100 yard dash in 9.4 seconds and was on the Northwestern State track and field team, which won the NCAA 400-meter relay in 1981. He holds the school 200 meter dash record with a time of 20.64 seconds.

Delaney was selected in the second round of the 1981 NFL Draft by the Kansas City Chiefs. United Press International named him Rookie of the Year of the American Football Conference for the 1981 NFL season after he rushed for 1,121 yards, set four club records, and averaged 80.9 yards a game. Delaney’s effort helped propel the Chiefs to a 9–7 record, the team’s first winning season since 1973. In his rookie season, he was selected to the Pro Bowl after setting Chiefs records for most yards in a season (1,121), most yards in a game (193 vs. Houston), most consecutive 100-yard-plus games (three) and most 100-yard games in a season (five).

After coming off the bench to record 101 rushing yards in his initial NFL action at New England, he ran for 106 yards and registered 104 receiving yards in his first professional start against Oakland. In the Chiefs’ October 18, 1981 game against the Denver Broncos, Delaney broke loose for a 75-yard touchdown run, but an offside penalty caused the play to be restarted from five yards back. On the second play after the penalty, Delaney scored an 82-yard touchdown, the longest rushing play from scrimmage in the 1981 NFL season.

A strike by NFL players and an eye injury limited Delaney’s playing time in the 1982 NFL season. He underwent surgery to repair a detached retina, and only registered 380 rushing yards in the eight-game shortened season, which the Chiefs finished with a 3–6 record. Delaney averaged 4.6 yards per carry, 9.1 yards per reception, and registered 1,811 all-purpose yards during his career with three touchdowns.

Delaney had a lifelong history of helping others, and once paid for the funeral of a former teacher whose family could not afford a proper service. On June 29, 1983, Delaney, who was living in nearby Ruston, went with friends to Critter’s Creek, an amusement center at Chennault Park in Monroe, Louisiana. While reportedly discouraging swimming children from venturing too far out in a pond, Delaney dove in to save three children who were screaming for help, floundering in a water hole left by recent construction work. The water hole, which covered two acres and was 6 foot deep, was not intended for swimming but to add to the park’s aesthetics. Despite his inability to swim, Delaney nevertheless tried to rescue the children. One child managed to get out of the water without harm and another was taken to an emergency room where he later died; police recovered the body of Delaney and the remaining child. The amusement park has since been closed to the public

Three thousand people attended Delaney’s burial and memorial service on July 4 which was held in the sweltering heat of the Haughton High School gymnasium. President Ronald Reagan honored Delaney with the Presidential Citizens Medal on July 15, and it was presented to Delaney’s family by Vice President George H. W. Bush. Reagan’s words were:

For the 1983 NFL season, the Chiefs honored Delaney by wearing a circular patch bearing a gold eagle and the number 37 on the upper-left chest of their uniforms. Haughton High School also made a park, Joe Delaney Park, in his memory. The NCAA posthumously awarded Delaney the NCAA Award of Valor in 1984.  Louisiana Governor Dave Treen presented the Louisiana State Civilian Bravery Award to Delaney’s family following his death.

Delaney’s heroism is honored through an award for one of the NFL’s best running backs who also demonstrates admirable character and unselfishness, traits that were embodied by Delaney. The award is given annually by ProFootballTalk.com.

Northwestern State’s football permanent team captains award, the Joe Delaney Memorial Leadership award, is named in his honor, as is the annual spring football game (“Delaney Bowl”) and a golf tournament that generates support for the athletic program. A permanent shrine honoring him sits under the home stands at Northwestern State’s Turpin Stadium and his number 44 jersey hangs in the football offices. In Virginia, the Delaney Athletic Conference took its name to honor his memory in the fall of 1983, and today 13 Virginia private high schools comprise the DAC.

A group of Chiefs fans in Kansas City formed the “37 Forever Foundation,” which works with the American Red Cross to provide swimming lessons for underprivileged children. The Kansas City Chiefs unofficially retired Delaney’s jersey number 37 following his death, and he was elected to the team’s Hall of Fame in 2004. His name is included in the Chiefs’ ring of honor at Arrowhead Stadium.

Joe Delany was a tremendous football player, unfortunately he was taken so soon that we will never know how great he could have been. But, their can never be any doubt what kind of man he was, and as a man he was definitely 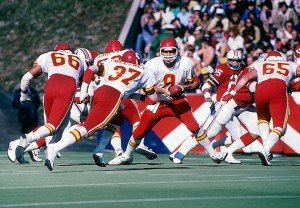 a hall of famer!

Previous article
« Tom Flores: Why he should be in the hall of fame!
Next article
NFL Power Rankings entering Week 16 of the 2020 season »