You know what drives me crazy? The kneejerk reaction to a work of entertainment.

Listen for this the next time you go to the movies. As though seeking to set some sort of record for world’s quickest review, with milliseconds of the given movie’s final frame, some yahoo in the audience will loudly proclaim to his/her companions, “that was good!”

To which I immediately think to myself, “Well, it probably wasn’t.” Because the grueling truth is that the movie the aforementioned yahoo just spent two hours and too much money on provoked no thought, no discussion whatsoever. One who exclaims “that was good!” indicates that he/she is digging no deeper than a bit of unfulfilled consumption of a hackneyed story.

In sports, the equivalent of the “That was good!” cry is “That was The Greatest [Name of Sporting Event] Of All-Time!”

Nipping at heels of the conclusion of nearly every great sporting event do we hear it from the everyfans tweeting and the talking heads broadcasting. Just this year, we were told that the Golden State Warriors were better than Michael Jordan’s Chicago Bulls, who were The Greatest Of All-Time, until Lebron James, who may be the Greatest Basketball Player of All-Time Yes Including Jordan, led the Greatest NBA Playoff Finals Comeback of All-Time.

Just recently, if you believe those rushing to hold your attention on TV or those online looking to win the keyword wars early, fans of Major League Baseball were treated to The Greatest Game Seven in World Series History, won by a team possibly Greater Than The New York Yankees, who were the Greatest of All-Time.

And how can we forget the reactions to that amazing incubator of sports hyperbole, the Super Bowl. Though no one but the literally insane was crazy enough to call Super Bowl 50 the Greatest Super Bowl of All-Time, Patriots-Seahawks had seemingly ascended to the status of Greatest *Football* Game Of All-Time in the public consciousness within approximately 10.72 seconds after Malcolm Butler’s interception. Fine and good, but what about Cardinals-Steelers? Giants-Patriots I? Giants-Patriots II? All consigned to the lower rungs of an inevitable “Top 10” list on Super Bowl Monday.

So here’s an early New Year’s resolution for those wishing to hastily compartmentalize the 104th Grey Cup or any major sports event as the Greatest Of All-Time or something equally banal. Let’s ponder the season that was a bit longer. Let’s revisit the game (not so easy for Calgary Stampeders fans, perhaps, but hey, your guys will be back with a vengeance) to admire Henry Burris and the Stamps comeback and the onside kick and everything else.

But most of all, let’s appreciate the now. We’ve got six months until the glimmerings of CFL are back on the horizon. The South, for one, is in no hurry to turn the page in this history book.

I mean, what a game, right?

The 104th Grey Cup: Ottawa RedBlacks 39, Calgary Stampeders 33 (OT) reads the final score, but as with all great games, even the parenthetical cannot convey the edge-of-seat suspense in which this one kept its viewers. After a 2016 CFL season filled with cliffhangers, overtimes and late-game comebacks (some not even involving the Winnipeg Blue Bombers), we get this Grey Cup final, a cliffhanger with a late-game comeback that went into overtime.

Even when down 27-7, the Stamps refused to go out and CFL fandom presciently refused to count them out. After all, “No Lead Is Safe” and these are the 15-2-1 Calgary Stampeders we’re talking about, possible The Gr … ah, you know the rest. Sure enough, a 26-6 comeback ensued in the best traditions of Stamps and CFL football.

As for how this game ranks in the annals of CFL history, who knows? It’s hard to imagine any Grey Cup game serving as such a fitting ending for the season which it capped. (Maybe football history geek Joe Pritchard can help me out with this one…)

View from the South – Literally. At the beginning of the season, an exciting development for US-based fans of the CFL was the extensive broadcasting schedule released in cooperation with ESPN. Idealists like myself saw this as a golden opportunity for American football fans to get into the Canadian game, what with its season opener kicking off a couple months before the NFL’s.

And it worked – the DraftKings daily fantasy partnership deal with the CFL did no small share of good as well – for a while. Until the NFL kicked off and CFL games disappeared from their temporary home on ESPN 2. Thereafter, ESPN 2 saw fit to broadcast one (!) playoff game and Sunday’s Grey Cup game; in fact, for about a minute it appeared as though the feed to the ‘Cup was about to be cut in favor of drone racing.

Nevertheless, despite the step-second cousin once removed status the CFL “enjoys” with ESPN, the Grey Cup was intriguing enough to garner attention on some of the network’s programs. So here’s Chris “The Bombast” Berman’s take… 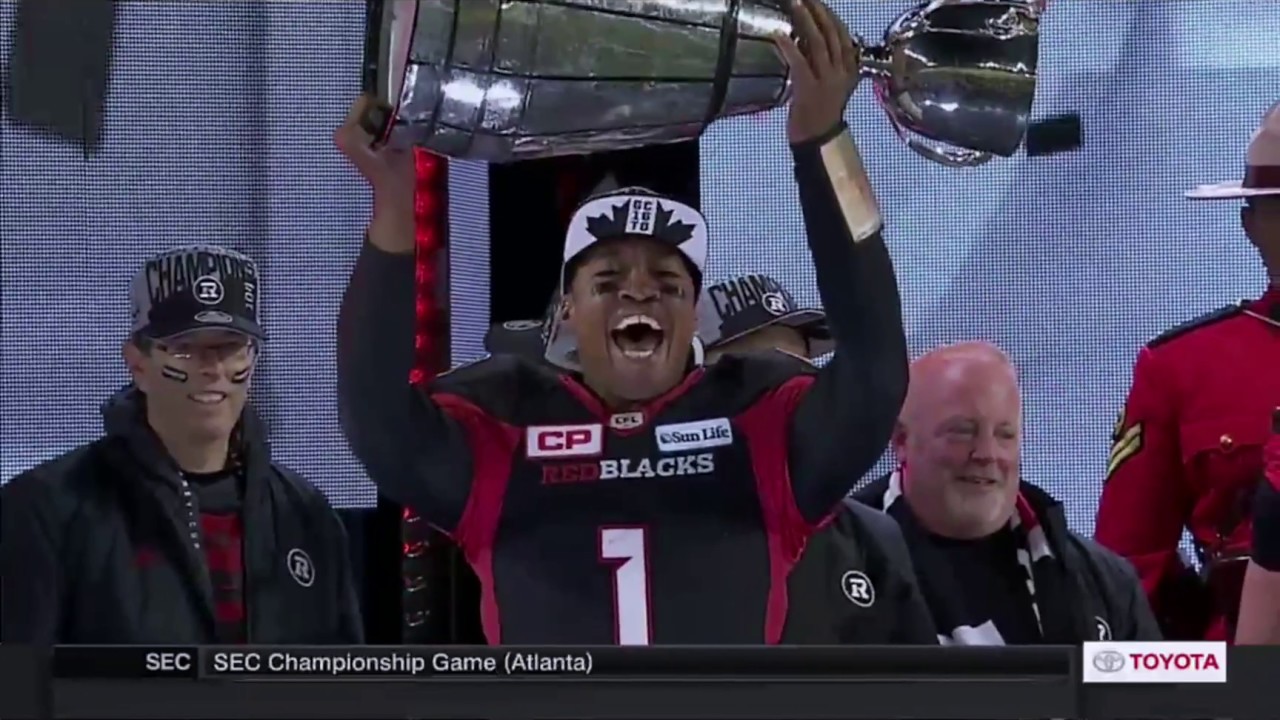 Statistic Of The Week. Well, it’s gotta be Burris’s line: 35-of-46 passing (a 76.1% completion rate) for 461 yards and three TDs against one interception. Is that even real?
Moral Of The Week. Never count Henry Burris out. Even next season, when he’s going for his fourth Grey Cup at age 42.

Plays Of The Grey Cup. In a game that had damn near everything, more than one moment deserves mention here. So here’s a quartet for you. In terms of interest – and a handy crash course on a difference between the US and Canadian games – there was the hullabaloo of the third quarter.

After Zach Evans burns the opposing lineman to sack Bo Levi Mitchell, Mitchell sloppily fumbles even further behind the line of scrimmage. The day (and the Stamps’ possession of the ball) is saved by Jerome Messam with a swell heads-up play. (At the time, the entire second half felt about as intense as this play…)

If The South has spoken to you personally after this game, you’ve heard me rave about this onside kick, a (temporary) game-saver for the Stampeders. I’ve seen about a kajillion football games and I can recall one onside kick executed this well – and this one had a lot more flair.

In terms of the history books and fodder for second-guessers, this ended up the most significant play:

The grueling truth, though, is that we wouldn’t even be talking about Mitchell heaving the long ball in overtime if what appeared to be a path to paydirt for the winning score hadn’t been cut off by Abdul Kanneh’s desperate grab. Burris will get all the kudos, but it’s Kanneh who ultimately made Ottawa’s ‘Cup win possible.

Weird Canadian News Story Of The Week. What better way to close out this part of the column for this season with a story about UFOs? Reportedly, a recent spate of UFO sightings have been reported in North America and Turkey.

If you believe finer news sources like the not-at-all-a-tabloid UK-based Mirror, most of us have nothing to fear, however: Apparently, these alien craft may be seeking out specific individuals, possibly for probing purposes. The Mirror quotes an unnamed “terrified man” in Brandon, Manitoba, who claims a single UFO followed him for “about 12 miles down a motorway.”

The bad news is that the Brandon sighting and its subsequent ignoring by the mass meida is simply part of a coverup dealing specifically with the Manitoba area, which is reportedly an epicenter of UFO activity these days. Here’s to thinking the ETs’ll be heading home now that Grey Cup weekend is over… 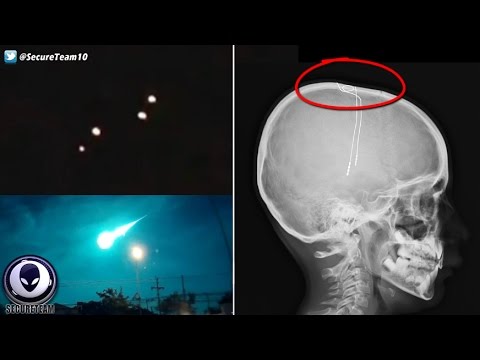 The CFL Play Of The Year. What else could it be besides the very moment that made us question reality as we know it – several months before the US presidential election, even…

The Greatest Grey Cup Ever? Like I’m gonna answer that. For some perspective, here’s the Grueling Truth’s list of Top 10 Grey Cups ever played. Note, however, the egregious omission of the 2009 “13th Man” game, which any Montreal Alouettes fan worth his/her salt would’ve had on the list…

Next year: The Stampeders play like a team possessed, despite improvements to every other division mate in the West; Montreal is hopeless, Toronto rebuilds, and the West crosses over into the East half of the playoffs again…